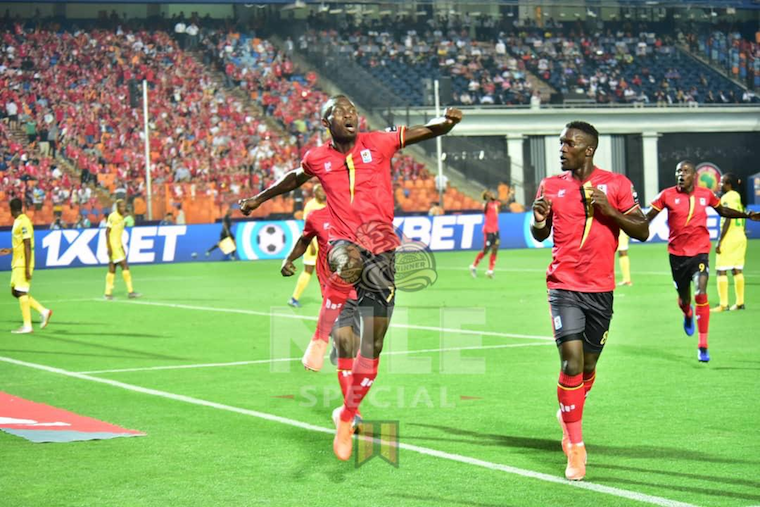 The Warriors of Zimbabwe fought from a goal down to hold Uganda Cranes to a 1-all draw in a Group A game at the on-going 2019 Total Africa Cup of Nations (AFCON) in Egypt.

Watched by a big crowd at the Cairo International Stadium on Wednesday night, the Cranes started with a high tempo and took a 13th minute lead through Arnold Emmanuel Okwi.

Swedish based Abdu Lumala blasted a hard shot that the Zimbabwe goalkeeper parried back into play, finding Okwi who tapped in. It was Okwi’s second goal of the tournament after he scored in the 2-0 win against DR Congo in the opening game.

But the Warriors fought back strongly to dominate play and cause problems in the Cranes defense. South African based Khama Billiat continued to trouble the Cranes and had two shots miss the target.

Billiat however made it 1-1 with a neat tap-in in the 42 minute after the Ugandan defenders had failed to block a neat pass. In the second half, the Warriors continued to dominate play and Uganda’s Dennis Onyango had to scoop the ball off the line, while another hit the cross bar.

The absence of Murushid Juuko in Uganda’s defense caused a lot of questionable defending that was never seen in their first game. The Tanzania based defender was rested by coach Sebastien Desabre because he picked a yellow card in the opening game.

Meanwhile, hosts Egypt joined the Super Eagles of Nigeria in the last 16 after they beat the Democratic Republic of Congo 2-0 from the same stadium in another Group A game.

Skipper Ahmed Elmohamady and Mohammad Salah scored the goals for Egypt who were cheered on by a passionate home crowd. After winning 1-0 in the opening match against Zimbabwe and picking another comfortable victory, the Pharaohs sealed their place and remained on course to win a 7th AFCON title.

Coach Javier Aguirre said he is happy his players adapted well and created several scoring chances.
“We are now ready for Uganda who we play on June 30th,” added Aguirre.

Nigeria became the first team to make it to the last 16 after defeating Guinea 1-0 in a Group B game played at the Alexandria Stadium. Kenneth Omeruo headed in Nigeria’s only goal to make them remain unbeaten after two games. The Super Eagles won their opening match 1-0 against debut making Burundi.

On Thursday, Madagascar will battle Burundi in the only Group B match in Alexandria, while Senegal takes on Algeria in the highlight of Group C at the 30 June Stadium in Cairo.