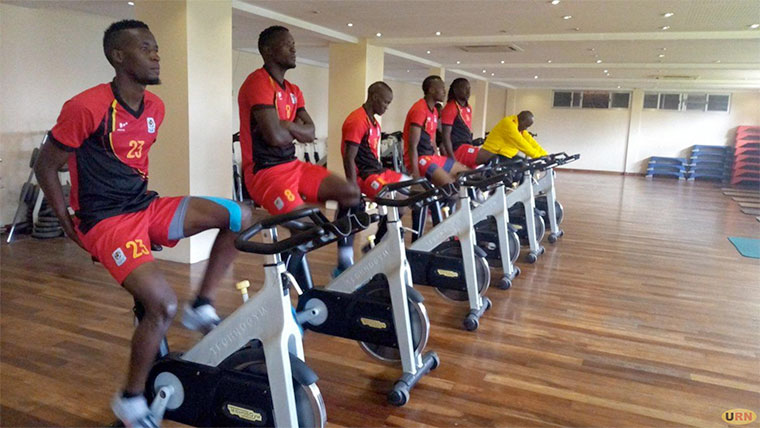 Cranes player in the gym

Uganda Cranes head coach Sebastien Desabre has dropped six players have been dropped from the squad that will travel for a three-week camp in Abu Dhabi, UAE ahead of the 2019 Total Africa Cup of Nations (Afcon).

KCCA FC attacking midfielder Allan Okello together with Express FC striker Dan Sserunkuma are among the players dropped by Desabre on Monday. Desabre said he has maintained 11 players who will travel to UAE and be joined by the other professionals to make a squad of 26.

Uganda is grouped alongside DR Congo, Zimbabwe and hosts Egypt in Group A for the 2019 Afcon slated for June 21 to July 19. The coach said the six players dropped Okello, Sserunkuma, Charles Lukwago, James Alitho, Juma Balinya and Mustafa Mujuzi will join the second team which will participate in the COSAFA Cup from May 25 to June 8 in Durban, South Africa.

During the Uganda Cranes camp in UAE, they will play the first international friendly on June 9 with a team they are yet to announce and a second game against African champions Ivory Coast on June 15.

“We have the quality to compete and reaching the knock out stage will be our target during the Afcon in Egypt,” said Desabre.

Besides Uganda, the other member countries of the Council for East and Central African Football Associations (Cecafa) region that qualified for the 2019 Afcon include; Kenya, Tanzania and Burundi.