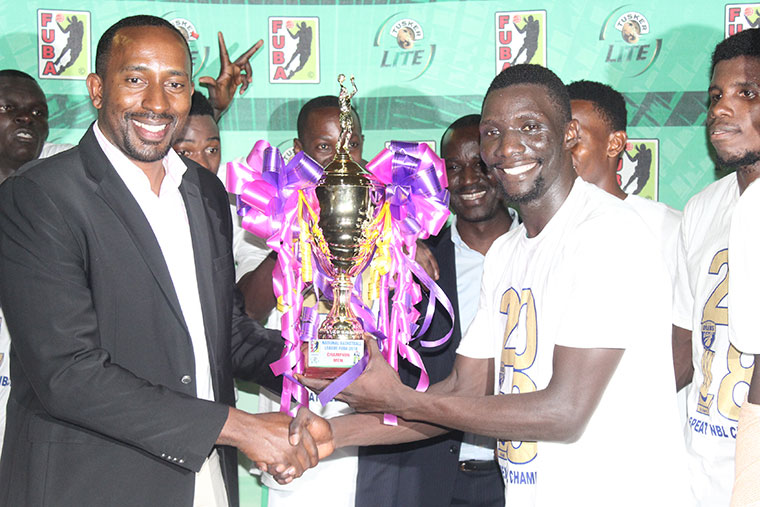 City Oilers already have their sights on a seventh National Basketball League championship next year.

This is just weeks, after they won an unprecedented sixth successive title last month. The fact that Oilers are already looking that far, points to the insatiable appetite to win, that the club has developed through an ever-growing character.

James Okello, Oilers’ power forward told The Observer that winning their recent success was strongly celebrated, but now that is gone. They are now looking to the future.

“We have always wanted to set new records. Now, we want to create an unassailable lead over our major rivals in terms of league championships won. We want to fly alone, so that we are talked about for many generations to come, as the best team ever,” Okello said.

The unrelenting determination to remain top, is what has kept Oilers winning from their first season of existence in 2011, when they won the division three title, before topping division two, to qualify for the top-flight at the end of 2012. From their maiden top-flight season in 2013, they have won all the domestic championships.

That has earned them the right to represent the country in the Fiba/Africa Zone Five basketball championship. In fact, in four appearances at that level since 2014, they have won two titles in 2016 and in 2017.

No doubt this can largely be attributed to Oilers’ fully functional professional approach. All their players are full-time basketball employees. Unlike their opponents, whose players have other employment, which would interrupt with their training programme and focus on the game, for Oilers, it is not the case.

By and large, the playing staff and the coaching team at Oilers are entirely pre-occupied by basketball. And it has just worked like magic. At Oilers, players sign professional contracts, aware that they have to be at training by 4pm strictly.

Yet, if you are employed elsewhere, that would prove difficult, because sometimes one is held up at work, like many other basketball players in Uganda normally experience, leading them to miss their clubs’ training sessions.

Oilers has ensured that all their players receive a basic salary on top of the winning bonuses. The average salary is reportedly Shs 800,000, which is relatively what banks in Uganda pay their junior staff, say, tellers. But the bigger players at Oilers earn more than that.

For example, when Oilers signed Rwandan international Kami Kabange for the 2013 season, he was provided with a house, tuition for his daughter and a job for his wife, on top of the English lessons she attended, all on the club’s cost.

Kabange played for Oilers until the end of the 2016 season, before returning to Rwanda. But generally, he lived a comfortable life here, even though his return to Rwanda was a result of securing a more lucrative deal.

In addition, players at Oilers are guaranteed healthcare. For the biggest part of the last two seasons, point-guard Ben Komakech has been struggling with knee injuries. Yet, Oilers paid all his expenses, including taking him outside the country for surgery until he fully recuperated.

During all that time, Komakech’s welfare was catered for. Other members of the team, like Jeff Omondi now work for the mainstream Oil and Tyres company, after retiring from playing basketball. Such is how closely knitted the Oilers family is, and why it remains a difficult to beat team.

Although on paper, Oilers seemed to be at its weakest this year, they defied odds. Oilers’ small forward Stephen Omony explained that it all comes down to how the management ensures that they are motivated.

Inevitably, Omony said, it is difficult for everyone not to put their bodies on the line, just to win championships, and reciprocate the care they receive from the administration.

Albert Ahabwe, a basketball enthusiast told The Observer that the performance of the Oilers players, put simply is the accountability they offer to the bosses of the club, Mohammed Santor and Ahmed Hassan, for the dedication and commitment they have towards the players.

Ahabwe, who is Oilers’ Jonathan Egau’s representative said, that when he was injured during game two of the play-off finals with Power, the club management called him, to brief him every step of the way, about how the player would be treated.

That included getting Egau to a Ugandan surgeon, who is also a consultant in South Africa. Egau should be fully recovered by the start of the 2019 season. That is how thorough Oilers are, but also organized, even in the little things, as some may view them. A case in point, Oilers ensure that their players get at least three pairs of new sneakers per season.

On top of that, three-quarters of the squad reside in the same area code, Mutungo, Luzira and Bugolobi like a number of the team’s top bosses. This has allowed them to easily access their training ground at Silver Springs. But more importantly, an indefatigable team that many just do not know how to stop.