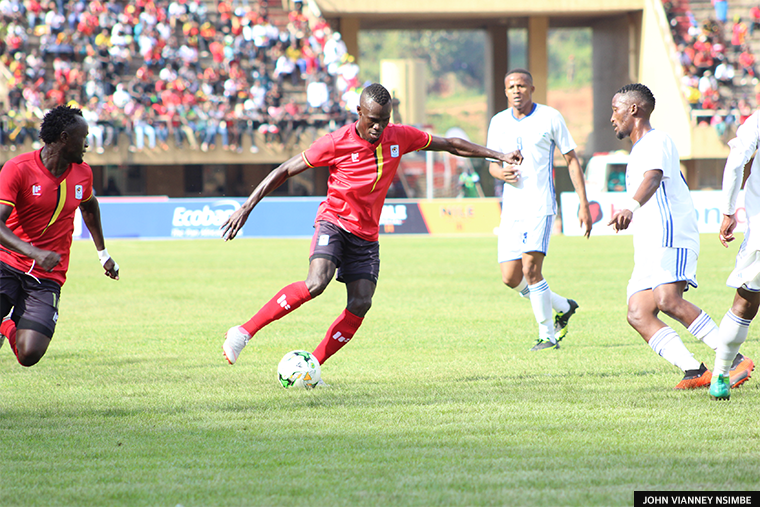 Uganda Cranes will qualify for the 2019 Africa Cup of Nations in Cameroon on Tuesday October 16 provided they beat Lesotho in Maseru, and the game between Tanzania and Cape Verde ends in a draw.

Following Tanzania’s 0-3 away loss to Cape Verde on Friday October 12, and Cranes’ 3-0 win over Lesotho on Saturday October 13, Uganda has its destiny in its own hands with seven points collected so far.

The Taifa Stars and Lesotho remain on two points after three games while Cape Verde is on four points. In light of that, Cranes coach Sebastien Desabre could not echo enough how goals have changed the spectrum of the entire campaign.

After the Lesotho game, an all-smiling Desabre said that after the Tanzania game in September, everyone was disappointed, because the team did not score, even though they remained top of the group.

“Now that we beat Lesotho, which is only logical, that we must win all our home games everyone is happy and the team is confident,” Desabre added. Many fans viewed Cranes’ win over Lesotho as an improved performance from the Tanzania goalless draw.

Yet, not necessarily according to Desabre. Although he does not think that their overall display against Lesotho superseded the one against Tanzania, scoring goals is significant for any team, if they are to grow in stature: “As a team we are still improving on the way we use the ball in terms of passing and movement on and off the ball.”

Desabre hopes that they can add a stone to the process, when they face Lesotho on Tuesday, by exhibiting good football, and also score a few goals. The French tactician added that while the team continues to work, he was impressed with some performances in the team in spells.

He said that Faruku Miya, scorer of Cranes second goal from the spot on 34 minutes and Moses Waiswa had some nice combinations as attacking midfielders. But at the same time, they helped carry the ball from deep, as they offered a lot defensively, when the team needed to win back possession.

Miya and Waiswa had bundles of energy, keeping Lesotho on the back-foot, as they run at them. Hopefully, as time goes on playing together, both can make Cranes an attacking threat from the middle too. Not many threaded passes to the forwards, were made through the central axis by them, yet that, beyond scoring, has to be their primary role.

Considering how Lesotho were humbled, they are expected to be more offensive at home, in order to get a win. Probably, that is what Miya and Waiswa, and whoever is picked in midfield, will need to be more effective, when Cranes attack.

That said, there was a bit of a frown amongst many football fans, when the Cranes line-up on Saturday was released, and it was Edrisa Lubega chosen to lead the line. Desabre explained that it was no rocket science, because they needed a centre forward, who could run the channels with his speed, to stretch the defence.

Lubega did that successfully in the second half, which led to Cranes third goal, seeing that striker Emmanuel Okwi, ghosted into the penalty area from his wing position unnoticed, to direct a header far from the goalkeeper.

Against that, Lubega should keep his place for the foreseeable future. Despite his bad first touch, which affects his composure, when in scoring positions, Lubega tired the defence, after running them rugged: “Lubega is a different striker from the others, and because of his speed and runs, he helped open up the opponent’s defence,” Desabre said.

In addition, because of Lubega’s physicality, he appears better suited for the central striker role more than Okwi was, when Uganda played Tanzania. Playing as an outside forward appears to have worked magic for Okwi, who bagged a brace, first on 11 minutes and later on 64 minutes. He enjoys being involved in play as a pseudo winger, as opposed to having to wait for crosses, to battle with centre-backs.

“I enjoyed the role the coach gave me against Lesotho. And to score two goals in special. I hope I can continue in such form,” Okwi said. However, Okwi hastily added that he is always open to whatever responsibility the coach hands me for the good of the team.

That said, not many people had watched Dennis Guma play in his more accustomed centre-back position before until Saturday. Yet, he acquitted himself well. Mike Mutebi, the KCCA FC coach said that Guma has always been a centre-half, and a smart one at that; comfortable playing out from the back.

Guma linked up play quite well without having to hack the ball forward, but feeding it to the midfielders. Together with his more senior partner, Hassan Wasswa, they looked solid. One can only wonder what happens next, when Murushid Jjuuko, who was suspended for the game against Lesotho, following the accumulation of yellow cards returns.

Desabre was non-committal. But he said that they were both good players, and for a coach, he will go with whoever does well in training and in match situations. Guma impressed on Saturday, and it is clear, that rarely is a winning team changed.

However, it goes without saying that of all Cranes players, that started the game against Lesotho on Saturday, Joseph Ochaya, who is primarily a left-back, did not do well as a left winger. He failed to negotiate the line, let alone deliver any substantial crosses to the forwards.

But Desabre leaped to Ochaya’s defence, saying, “Ochaya may not have been so good technically, but he executed his role well tactically. You see, I like my teams to play with balance. A right footer plays on the right, as does a left footer on the left.”

From a defensive perspective, Ochaya executed the role Desabre gave him. Yet on the offensive side, as a left-sided forward, he came short. It is hard to really blame Ochaya, when he is used in a role he does not play in regularly at his club.

Yet, being that Cranes are away on Tuesday, Ochaya is likely to keep his place in the team. As much as Desabre would like to see his team play more expansively and fluidly, something that Ochaya’s discomfort in attack frustrates, the three points are crucial at this juncture.