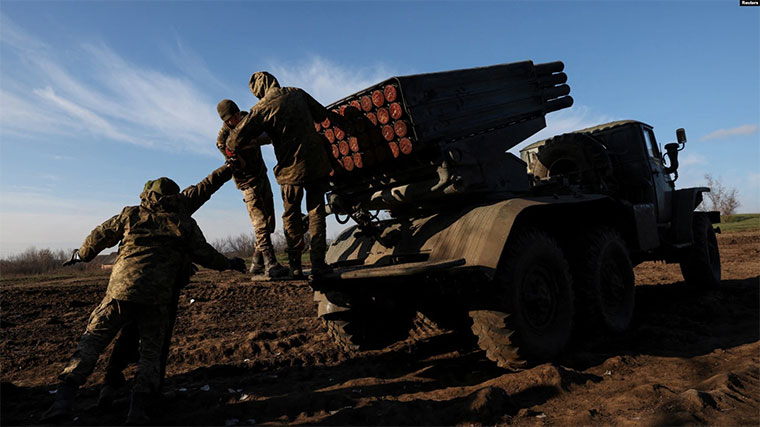 Russian President Vladimir Putin has said he expects a long war in Ukraine, but that he saw "no sense" in mobilizing additional soldiers at this point.

Putin told a televised meeting of the Kremlin’s Human Rights Council — a loyal group of journalists, activists and public figures — that Russia would continue to "defend ourselves with all the means at our disposal" in Ukraine. He contended that Russia was seen in the West as "a second-class country that has no right to exist at all."

"As for the duration of the special military operation, well, of course, this can be a long process," Putin said, using his preferred term for his war against Ukraine, now in its 10th month.

But he said there was no need for a second mobilization of more soldiers, after a call-up of at least 300,000 reservists in September and October, an order that shocked many Russians. Thousands of men, fearful of being sent to the front lines to fight against Ukraine, fled Russia, driving on clogged roads out of the country if they could, or paying sometimes exorbitant fares to board whatever flights they could get bound for other countries.

Putin said of those called up, 150,000 are now deployed in Ukraine, with 77,000 in combat units and the remainder performing defensive functions. The other 150,000 are still at training centres, he said.

"Under these conditions, talk about any additional mobilization measures simply makes no sense," he said.

As he has done in the past in discussing the war in Ukraine, Putin said the risk of a nuclear war was growing but that Russia would not threaten to recklessly use such weapons.

"We haven't gone mad, we realize what nuclear weapons are," Putin said. "We have these means in more advanced and modern form than any other nuclear country, that's an obvious fact. But we aren't about to run around the world brandishing this weapon like a razor."

U.S. State Department spokesman Ned Price, when asked about Putin's comments, would not reply directly but said, "We think any loose talk of nuclear weapons is absolutely irresponsible."

Price said nuclear powers around the world since the Cold War, including China, India, the United States and Russia itself, have been clear that "a nuclear war is something that must never be fought and can never be won."

"We think any other rhetoric — whether it is nuclear saber-rattling or even raising the specter of the use of tactical nuclear weapons — is something that is irresponsible," Price said. "It is dangerous, and it goes against the spirit of that statement that has been at the core of the nuclear nonproliferation regime since the Cold War."

German Chancellor Olaf Scholz said in an interview published Thursday that international pressure on Russia has lessened the risk of nuclear weapons being used in the Ukraine conflict.

"One thing has changed for the time being: Russia has stopped threatening to use nuclear weapons. In response to the international community marking a red line," Scholz said in the interview with Germany's Funke media group.

Asked whether the threat of a nuclear escalation had been averted, Scholz replied: "For the time being, we have put a stop to it."

This week, Russia sustained new losses, with drone attacks on airbases and other facilities hundreds of kilometres inside Russia and in regions near the Ukrainian border. The Kyiv government has not directly acknowledged it carried out the attacks but taunted Moscow about the vulnerability of its air defenses.

US National Security Council spokesman John Kirby said Wednesday the United States has expressed its concerns to Ukraine about any expansion of the war with Russia but respects its sovereignty in deciding how to use weapons supplied by the US and its Western allies.

"We have been consistent on our concerns over escalation," Kirby said and noted he had "not encouraged" the apparent Ukrainian drone strikes on two airbases deep inside Russia on Monday.

He said the principle behind the Western support for Ukraine was one of sovereignty, though, and "unlike the Russians, we respect Ukrainian sovereignty."

"When we give them a weapons system, it belongs to them," Kirby said. "Where they use it, how they use it, how much ammunition they use to use that system, those are Ukrainian decisions, and we respect that."

Putin, in his Kremlin comments, said he has no regrets about launching the most expansive war in Europe since World War II. Initially, Russia strategized for a quick takeover of Ukraine and capture of the capital, Kyiv. But Ukrainians repelled the attacks then, and in recent months the fighting has been centred in eastern and southern Ukraine, where Russia most recently retreated from the key regional capital of Kherson.

"This is a significant result," Putin said.

Some material in this report came from Reuters and Agence France-Presse.

There will be no clear winner in that war, except maybe through diplomacy. Meanwhile, Africa can just sit and watch as they always do with the African conflicts.
Report to administrator
0 #2 jose 2022-12-09 06:45
I used to admire russia, to level of calling myself peter kusmich the post master but the day putin attacked ukraine i became a supporter of Ukraine n i call myself ivan zelensky

Putin has held Russians as his slaves for so long & they are so afraid of him, but some are raising up to say NO to the Ukraine war now, even when they are suppressed by Putin's worriors!

Museveni is enjoying Ugandans' loss of their land, freedom & enslavement to him!

But Ugandans can say NO to the divisive tribalistic system & UNITE to block & show Museveni way out or they are doomed for good as they protect Museveni protectede from all sides;

The outside world will just respect Ugandans choise of ruler & remain silent!

Ukraine has USA/UK/EU/NATO...!
Report to administrator
+1 #4 Zaitun 2022-12-09 20:13
After long years of enduring colonialism and still suffer the same, we Ugandans have failed to grasp what is happening in the world of today.

So bad that many of us have failed to understand why the west is using Ukrain to fight Russia.

After destroying Iraq, Libya, they then went to Syria. Had it not been for the Russian involvement, Syria would have been reduced to a French colony once again.

If we have not understood the reason and the consequences of the war that was in Côte d'Ivoire, then I am forced to believe that in Uganda we have no political analysts.

Côte d'Ivoire is no longer for Ivorians but is a French colony with a black French president where the economy is controlled by the French. What of the war in Congo?

What about here in Uganda? Do you know that the country has partially been sold, and we are just tenants but not land lords? What do we own? That is what they would have liked to do in Russia by going through Ukrain!!!
Report to administrator
+1 #5 JP 2022-12-10 00:14
After 10 months of conflict without a clear winner, one can only deduce that Russia's superpower status has been severely dented.

It's difficult.to determine the outcome of the war; and the longer it takes the more pointless and futile it will seem. Rather than taken sides with either belligerent, the rest of the world should unite to stop the war
Report to administrator
0 #6 Zaitun 2022-12-10 19:31
Quoting JP:

After 10 months of conflict without a clear winner, one can only deduce that Russia's superpower status has been severely dented.

It's difficult.to determine the outcome of the war; and the longer it takes the more pointless and futile it will seem. Rather than taken sides with either belligerent, the rest of the world should unite to stop the war

What do you mean by the rest of world? Does Africa have any say in world politics if it is not always being used by the former colonisers to achieve their exploitative ambitions just like they are doing here in Uganda?

Which countries are supplying arms to Ukrain to arrive at colonising Russia that used to supply gas and petrol to European countries?

We Ugandans are just good in criticising but refuse too read objectively. That is all what we are, sorry to say so!
Instead of criticising, let us remove the thorns in our feet please. Europe or Russia, that is their affair.
Report to administrator
-2 #7 Uhuru 2022-12-10 20:54
No Zaitun, it is the likes of you who want to appear intelligent but have failed to understand. Russia invaded Ukraine. The West is only helping Ukraine to defend it self. AND let us be clear; Russia will never ever win this war; not with their so called superior weapons exploding like popcorns under the Ukrainian artillery fire!

They will also lose in sales of military equipment, for the world now knows how useless their weapons are. Another thing; you will do well to separate the Russia-Ukraine war from wars that have been fought elsewhere with or without Western support or initiative.
Report to administrator
-1 #8 Lakwena 2022-12-12 11:28
But the truth is: Putin and his Russian troops are committing crime against humanity (special operation).

In other words, it is just the beginning of Winter, and the Temperature in Ukraine is already in -6 degrees. But cold-bloody Putin is destroying everything that would keep the Ukrainians (children, elders and the sick) warm.
Report to administrator