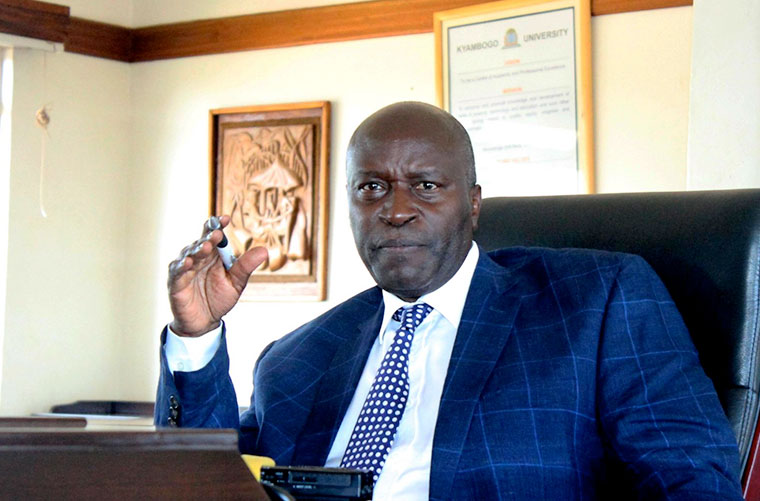 Police at Kyambogo University is investigating a racket involving some staff members and students that have been fraudulently changing grades for students with retakes and adding the unqualified individuals onto the graduation list.

According to information obtained by our reporter, at least eight students implicated for doctoring marks and other clearance requirements have reportedly been arrested pending an inquiry into the matter.

Addressing journalists on Monday afternoon, Kyambogo University vice chancellor, Prof Eli Katunguka noted that his office has been inundated with complaints from students claiming despite completing all the graduation requirements, their names are missing on the list while those with known retakes had been listed.

“It started as a rumour. We gave it attention and preliminary findings showed that there was foreplay going on. Indeed, some students who had retakes had appeared on the graduation list. They had altered marks,” Katunguka said.

He revealed that his office has since received information from investigators showing that the racket comprises former students who had graduated a number of years ago but had remained on the campus and some staff members.

"It also turned out that some students had connived with the roque elements in the university to alter their marks. That followed an investigation through my office and the academic registrar department with the help of the police. But we have made it clear to them that if you do the wrong thing and you’re caught, then you do the necessary penalty," said Katunguka.

The booklet is used by the chancellor who confirms each student's qualification by reading one name at a time. Parents usually take the graduation booklet seriously and from there they can tell a student who could have eaten tuition. For this reason, unqualified students have long used a variety of strategies, the most popular and possibly most expensive one is faking documents and finding ways to appear on the graduation list.

When the Kyambogo University graduation draft list was released recently, the university immediately began receiving inquiries from both students and their parents stating that they had not been included on the list despite fulfilling all requirements.

The university administration stated, however, in response to several questions, that students who weren't on the list either had retakes or hadn't yet paid their tuition. In fact, 40 students petitioned the High court for an injunction to stop graduation until their complaints were resolved, but the court dismissed their suits on technical grounds.

Katunguka, however, acknowledges that there might be some students who have genuine concerns. For instance, some of whose results came late yet the senate had decided not to have an addendum. But, he insists that even for those, who might not make it to the graduate list, the university will avail them transcripts as they wait for the certificates after graduation.

This year, at least 12,080 people will graduate in various fields, and five of them will receive doctorates in philosophy. Available data indicates that since the institution's founding, this is the largest class to graduate all at once. The university vice-chancellor credits the recent decentralization, in which each department now handles all academic matters, for producing the highest number of graduates.

Meanwhile, with this high number, there have been growing concerns about how the ceremony, which is strictly physical involving all students, even those from study centers will converge at the main campus in the face of the revived COVID-19 restrictions.

0 #1 Lakwena 2022-12-08 10:00
In other words, since DISHONESTY rules, this country is doomed to self-destruction (individual, family, society (schools/institutions and governance).
Report to administrator