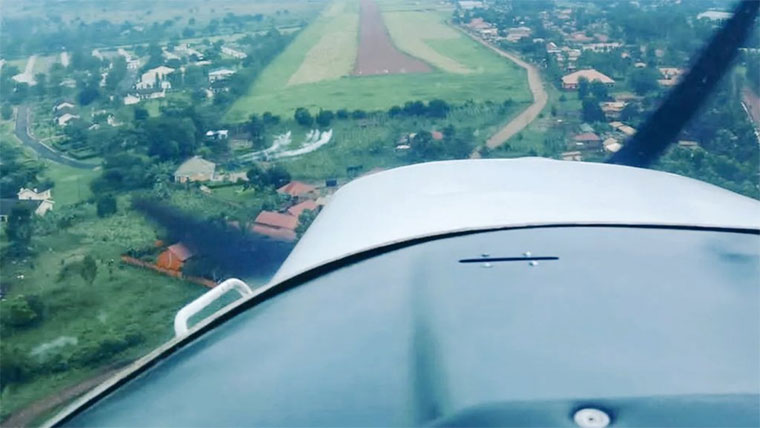 The student crashed a few meters off the runway

A small aircraft that was being operated by a student from the Jinja city-based Vine Air Flight Academy veered off the runway at Kimaka airstrip runway on Thursday afternoon and crashed about 20 meters away.

The unnamed student was immediately rescued from the aircraft and taken to an undisclosed location. The damaged aircraft, which is visible from the airstrip fence has been covered with orange-coloured plastic bags under the tight watch of tourism police to deter members of the general public from accessing the area.

Vincent Makanga, the Kimaka cell LC 1 chairperson in Jinja City Southern Division, says that the residents who had pitched camp along the fence were dispersed by tourism police who fired unspecified rounds of ammunition.

Peterson Mugabo, a motorcyclist in the area says that he heard the crash and sped off to the airstrip only to sight tourism police condoning off the accident scene. Uganda Civil Aviation Authority (UCAA) spokesperson, Vianney Luggya confirmed the accident, saying the affected student escaped unhurt and the situation is under control.

Dodd Katendeigwa, the chief executive officer of Vine Air Flight Academy, says that the aircraft sustained minor damage. He says that experts from the ministry of Works will examine the crash scene to qualify it as an accident scene or incident.