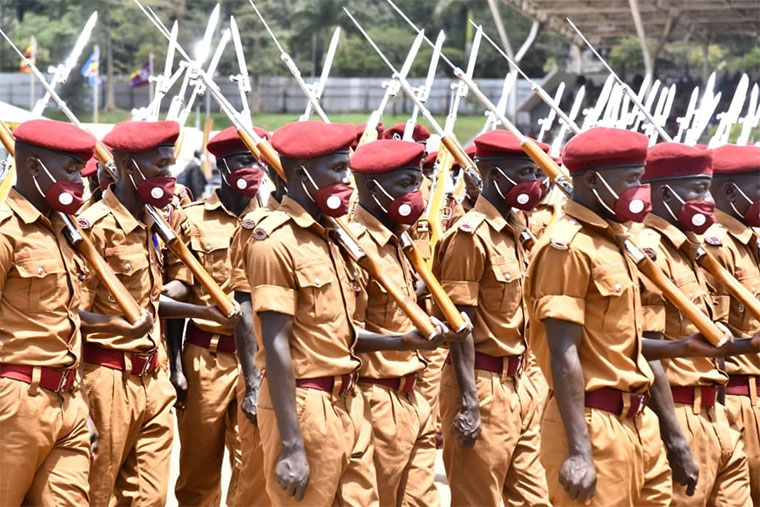 Prison warders march with their guns

A year ago, they were barely noticeable. But the recent spate of killings of security personnel and thefts of their guns is causing headaches for security chiefs. The commissioner general of Prisons, Johnson Byabashaija, has urged prison staff to be on alert.

He said, “The safety and security of guns must be taken as a top priority and desist from lone deployments.”

“The commissioner general of prisons notes that there has been a steady increase in attacks on security personnel, resulting in the loss of lives and the theft of guns... the start of the World Cup football tournament on November 20, 2022, and its excitement may result in prisoners’ escape,” he said in a press release issued Monday, November 21, 2022.

Byabashaija’s warning comes hot on the heels of four recent attacks on police posts and a UPDF soldier on duty at Amber Court road. The attackers have since stolen 11 guns and killed three police officers and one UPDF soldier.

The attacks have raised fears of an escalation of robberies and crime in communities. According to the statement released by Frank Mayanja Baine, the spokesperson of Uganda Prisons Service, Byabashaija ordered his men and women to enhance security in Boma and sentries where prisoners watch football and desist from lone deployments.

“Conduct night and day barracks and prison patrols, enhance searches on all people accessing and leaving prison premises,” he said.

NO PHONE AT WORK

He said no prison officer should report to duty with a phone. He said phones diminish alertness. The armed attacks and killings of security personnel have increased recently and are beginning to draw noticeable government attention.

Last December, police claimed in a statement that violent attacks were carried out by the rebel Uganda Coalition Forces of Change (UCFC). The attacks purposely target security personnel and other civilian targets. The rebel group was linked to the deadly attacks on four police officers attached to Busunju police station and Nakasozi police post.

According to the statement, in December 2021, the rebel UCFC lured two police officers, namely, CPL Alfred Okech and PC Moses Kigongo, into an ambush, killed them, and robbed their guns. On December 17, 2021, the same rebel group allegedly attacked the Nakasozi police post and killed two police officers, including CPL Francis Nsubuga and SPC Paul Ddimba. The killers stole their guns.

According to Fred Enanga, members of the group were nabbed. At that time, they planned to attack Sekanyonyi police station and acquire more guns, he said.

In July 2022, panga-totting men attacked two policemen at a roadblock in Kiwumpa village, five kilometers from Luweero town council. They stabbed the officers and stole two guns. On October 31, 2022, a group of armed assailants attacked the Busiika police post. They shot and killed two police officers on duty, injured two others, and robbed two guns.

Interviewed, Enanga said the assailants were seven, armed with a pistol and guns.

“They shot and killed the deputy in charge of the police post (D/IP), Alex Wagaluka, the in-charge CID, and police constable Moses Ongol. During the attack, the assailants injured two other police officers, who included PC Adrian Ochom and PC Stephen Odama,” Enanga said.

On November 15, 2022, gunmen on a motorcycle attacked Kensington police in Kyanja. Luke Owoyesigyire, the deputy spokesperson of Kampala Metropolitan Police, said the assailants fired bullets at the police post, but no police officer was injured.

On November 17, 2022, armed men attacked soldiers who were guarding a small gate at Amber Court road, adjacent to Gadaffi barracks. Sgt. Eyagu had been deployed together with L/Cpl Norico Kibirige.

Brig Gen Felix Kulayigye said the gunmen strangled and shot RA/110575 Sgt Simon Peter Eyagu, a UPDF soldier, attached to Gadaffi barracks, Jinja cantonment. At the time of the attack, Kibirige had allegedly gone to buy some drinks. The assailants walked away with two SMG guns.

“We are working closely with the UPF and other security agencies to apprehend the criminals. Two suspects have so far been arrested, and we have leads to apprehend the entire group. Jinja residents and Ugandans are called upon to remain calm. These acts of criminality shall be dealt with decisively, like we have dealt with many others before,” Kulayigye said.

In the aftermath of these attacks, Enanga said police are piloting 129 police posts to see the practicability of the Sub-County Policing Model. The police posts include 10 in the Sezibwa region, seven in the Katonga region, 15 in the Savana region, 27 in Katwe, 28 in Kampala Metropolitan East, and other areas.

“The piloting exercise is taking place in areas within the Kampala Metropolitan Policing Area and in the Central regions of Savanah, Katonga, Ssezibwa and Wamala. Its success will lead to its full-scale implementation plan to cover all 2,624 sub-counties in the country,” Enanga said.

Residents in the pilot areas raised concerns about reduced police response and visibility due to distance, which may impact safety and security in their localities.

“We want to inform our local leaders that the implementation of the model, will take a phased approach, that is determined by the available capabilities at the station in terms of deployable personnel, logistical requirements for transport, offices, residential facilities, and communication facilities,” Enanga said.

“We want to assure the public that the restructuring and reorganization are in the pilot phase. A full spectrum of police services for the entire sub-county will continue to be provided in a more effective and efficient manner,” he said.

He said sub-county policing will handle emergencies, traffic, forensic experts, crime intelligence, and other specialized units. The merger of forces allows for a more unified procedure for dealing with major incidents such as terrorism, domestic extremism, and targeted attacks on police officers and stations.

On November 15, 2022, Major General Tumusiime Katsigazi summoned all police, army, and prison commanders in the Savannah region for a meeting at the Luweero Diocese guesthouse in Luweero town to discuss how to fight insecurity in the area.

“We have agreed to reinforce police stations with at least 15 to 20 personnel, equip them to respond to any attack, deploy more canine units, and build more CCTV networks,” he said.

Katsigazi defended the merging of some police posts, saying these were symbolic and unable to repel attacks. He stated that there can be no successful new rebellion from Luweero.

“A number of arrests have been made over the attack on Busiika police station, but the guns are not yet recovered,” Katsigazi said.

+1 #1 Kalibbala 2022-11-24 01:28
Mr.Byabashaija stop taking Ugandans for a Ride! There are NO bandits Stealing Guns and Killing Policemen but All Tricks of NRA Notorious Robbers Army Returning to its Old Methods of causing Mayhem and then Coming as Redeemer! Uganda Today being misruled by Terrorists has Nothing to Deliver!!

Abductions of Innocent Folks only to End in Mass Graves scattered around the Country! One Karangwa has Introduced his Caliphate in Kayunga District with Kinyarwanda as National Language with Own Radio Drumming up All Bavandimwe To Prepare for The Day of Occupation!

They are Intending to repeat what They did in Luwero and Rwanda ! Massacre of Millions of Innocent People!! They Vowed To Kill You Until You get Tired of Dying!!Congolese are Prepared To Die..
Report to administrator
0 #2 kambarage 2022-11-25 04:18
[quote name=Mr.Byabashaija stop taking Ugandans for a Ride! There are NO bandits Stealing Guns and Killing Policemen but All Tricks of NRA Notorious Robbers Army Returning to its Old Methods of causing Mayhem and then Coming as Redeemer! Uganda Today being misruled by Terrorists has Nothing to Deliver!!
You sound like you are one of the attackers. Your tone is so full of hatred based on total misinformation. Truth is that police posts were attacked and culprits should be pursued

Abductions of Innocent Folks only to End in Mass Graves scattered around the Country! One Karangwa has Introduced his Caliphate in Kayunga District with Kinyarwanda as National Language with Own Radio Drumming up All Bavandimwe To Prepare for The Day of Occupation!

They are Intending to repeat what They did in Luwero and Rwanda ! Massacre of Millions of Innocent People!! They Vowed To Kill You Until You get Tired of Dying!!Congolese are Prepared To Die..
Report to administrator