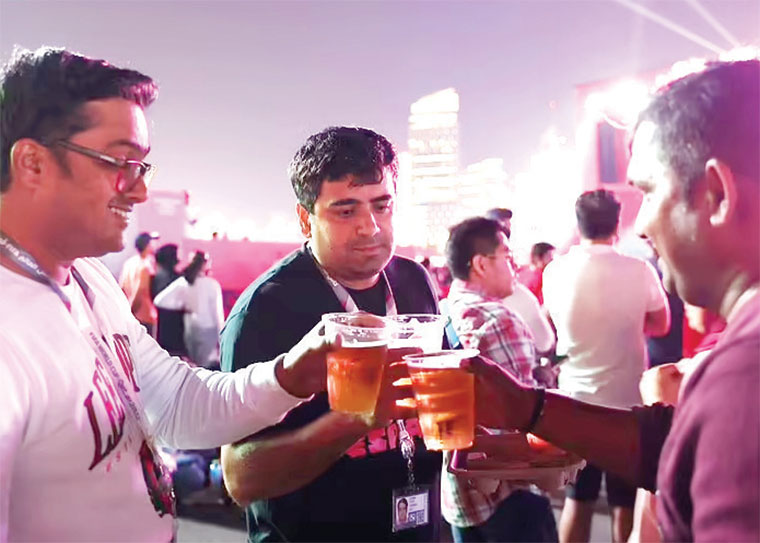 DOHA - Qatar 2022 is my fourth Fifa World Cup. And like the previous three, it is uniquely different. No World Cup is the same, which probably explains why we eagerly hold our breath for four years in anticipation of a football competition that lasts one month.

If every Fifa World Cup were the same, it is most likely that the tournament would be a bore. But 92 years since the first Fifa World Cup was held in Uruguay, the competition has grown to become the biggest event in world sport.

The football World Cup is more than football. It is a celebration of humanity; a global fete of culture, a grand holiday where sport, life and liberty meet and become the focal point of the diverse world.

Last Sunday as I boarded my connecting flight at Istanbul airport, it was very apparent that everyone who headed towards Gate F8A was going to be part of the 2022 Fifa World Cup. There was this huge legion of Mexican fans who were easy to identify with their sombrero hats, deep Spanish accent and green soccer jerseys.

Together with them were Argentina’s soccer-mad supporters who wore Diego Maradona’s no.10 tops along with a cluster of Brazilians, a few Ecuadoreans, Senegalese, Ghanaians, Dutchmen and Cameroon fans all dressed in their national colours and itching to land in Qatar.

Aboard the plane was one language – football. But the Fifa World Cup is much more than that. It is a holiday themed around the beautiful game. But in essence it has grown to transcend the game; it is a phenomenon much bigger than the 90 minutes of 22 men chasing a round piece of leather.

Followers of the Fifa World Cup may have noticed the upheaval championed by sections of Western media around the human rights situation in Qatar and the apparent thousands of immigrant workers who have died constructing the multi-billion-dollar facilities for the World Cup.

The international press has also been awash with stories highlighting how Qatar’s conservative nature is the antithesis of what a World Cup host nation should be with alcohol banned, LGBTQ freedoms denied and sex barred except for married couples in the Muslim country.

Perhaps the world is learning in a very hard way that no Fifa World Cup is the same; that the tournament will continue evolving and that four years is a very long time with so many variables that can happen in between.

In 2018 when Russia hosted the World Cup, Fifa were in bed with Vladmir Putin and the Russian Duma. Like Qatar, Russia was a controversial choice then. But the World Cup happened. And it was a huge success despite the country’s presumed poor human rights record.

Fast forward today, Russia and Fifa do not see eye to eye. The relationship is so bad that Fifa threw Russia out of the World Cup qualifiers because of the latter’s invasion of Ukraine. The game of football is so big it extends well and truly beyond the 90 minutes of action. Football has been dragged into the mud of culture clashes, the LGBTQ rights and religion. It is how Qatar 2022 finds itself caught between a rock and a hard place.

Qatar the country was never going to have it both ways. Either it had to bend its freedoms and appease the world, or it had to protect its values and have the world fit into what it stands for. Take, for instance, the decision to ban unregulated consumption of alcohol at the tournament, a pronouncement that rubbed the majority of passionate football fans the wrong way.

It is important to note that Budweiser manufacturer Anheuser-Busch spends about $75m every four years to be the official beer sponsor of the World Cup. Last week Qatar banned alcohol sales within World Cup stadiums, something the organisers had initially agreed to allow. The abrupt U-turn created a very uncomfortable situation for Fifa and Anheuser-Busch.

The beer company had to cancel many activations due to circumstances they deemed beyond their control. It was an unprecedented move; one which rubbed many the wrong way in the highest corridors of Fifa.

It ought to be noted that alcohol consumption in Qatar has not been banned. In fact, at Hamad International Airport in Doha, alcohol is sold in duty-free shops as you enter the country. But the most consumption (of Budweiser) takes place in and around the stadium environs, fan fests and areas mostly associated with the World Cup such as bars and restaurants.

By outlawing the commercial proposition of a Fifa partner, Qatar crossed a line. And the country knew that Fifa’s arms were tied considering the announcement came 48 hours to kick-off. World Cups are associated with alcohol, sex and a party. In banning unregulated consumption of alcohol as was the case in Germany 2006, South Africa 2010, Brazil 2014 and Russia 2018, it naturally impacted on the sex and revelry that would ensue.

Like football, beer and sex are synonymous with the World Cup. Tens of thousands of local and international sex workers usually make a killing during the month-long event. When teams win matches, most fans let loose. They drink like fish, dance like crazy and more often than not want to climax their excitement and enjoyment with different people of the opposite sex, mostly of varying races and cultures.

They will either buy prostitutes or befriend people in bars and restaurants, Fifa fan fests, stadiums and all places where football tourists converge. Lest we forget, the World Cup is a holiday of nirvana and the only rule for some is that there are no rules. It can be a one-month sabbatical of unrestrained emotions.

Studies have also shown how there is usually a baby boom in host countries nine months after a World Cup, which shows that couples also partake in the festivities of the celebration of humanity. Nightclub owners and bar and restaurant proprietors register sales they have previously never scaled simply because there is money in the air every time the World Cup happens for the host country. The trickle-down effect is huge.

When more than half a million people enter any economy (especially one with a 2,996,933 population such as Qatar) for one month, the impact is bound to be massive. This is not rocket science.

But Qatar 2022 is going to be different. There are checks and balances to track sexual immorality. Sex will only happen between married heterosexual couples; it has been expressly stated by organisers. Those who violate these laws risk imprisonment and deportation.

With beer and liquor consumption extremely restricted, it is unlikely that Qatar 2022 will create the sort of atmosphere the Fifa World Cup has become famed for. What this implies is that Fifa will most probably take a stronger stand in vetting the bids tabled for subsequent World Cups starting with 2030.

The next World Cup in 2026 will be the first to be hosted in three countries – Mexico, USA and Canada. It will also be played by 48 countries, an increase from the 32 taking part in Qatar. All three countries are liberal and you can be sure that the issues that have made Qatar 2022 controversial will be non-factors come 2026.

The 2022 World Cup is four days old and it remains to be seen how the remainder of the tournament days will be, considering the limitations that have been imposed by Qatar.

“This is simply not right for me who flew in from Ghana,” said Kofi Ampo, who travelled to attend his third World Cup. “How can they expect me to watch a match without beer? Football and beer go hand-in-hand.”

His views were echoed by Horst Neuville, a German who has attended every World Cup since 2002.

“So, they expect us to spend one month in their country spending on nothing? You have denied us women and beer, how else do we occupy our hours when football is not happening?”

But that is not to say that Qatar 2022 will be a disappointment to everyone. If you love imposing architectural designs, you will be awed by what the country has put up with its stadiums. 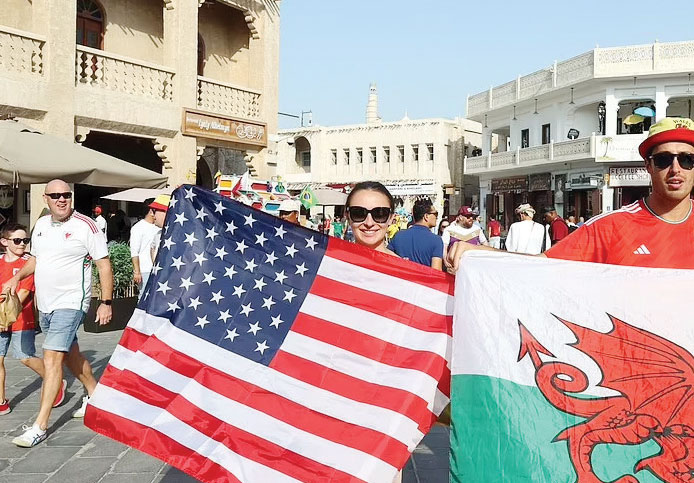 The Al Bayt stadium where Qatar played Ecuador on the opening night is a marvel. And then there is the Al Thumama stadium where Senegal took on Netherlands, whose unique edifice takes the breath away. Other grounds like Khalifa International and Stadium 974 are wonders of a rare kind with arguably the finest of them all being the iconic Lusail stadium, the 80,000-seater where the final will be played.

Ultimately, Qatar’s hosting is down to how someone views the Fifa World Cup. If you are one for whom football defines what the Fifa World Cup is, then that judgement can only be passed after the 64 rounds of matches, come December 18 when the final is played.

For a good number of others, the World Cup is about football n’ebigenderako. And seeing how the host nation has imposed limitations, this is for some fans a strange tournament whose ramifications will be felt in the bidding processes of subsequent competitions.

0 #1 Apollo 2022-11-26 20:01
Worshipped for one month of reckless abandon every fourth year, this is one idol that far surpasses the babylonian, greek and roman gods of old. Not even the legendary roman 'god of the sun' could match the worship and adoration for he was celebrated for just one week culminating into the day of the sun in the fourth week of December.

He still did not rival this one be it in binges, revelry or debauchery. For one month, the entire world will be transfixed at this golden marvel.
Report to administrator
0 #2 Webz 2022-11-27 00:27
It's indeed unwise for Qatar to cut human rights just because of religion. The wise saying goes that if you can't because of religion, leave everything all together. This, now, is a world of freedom. Those that can't be free, go to Mars.⁸
Report to administrator