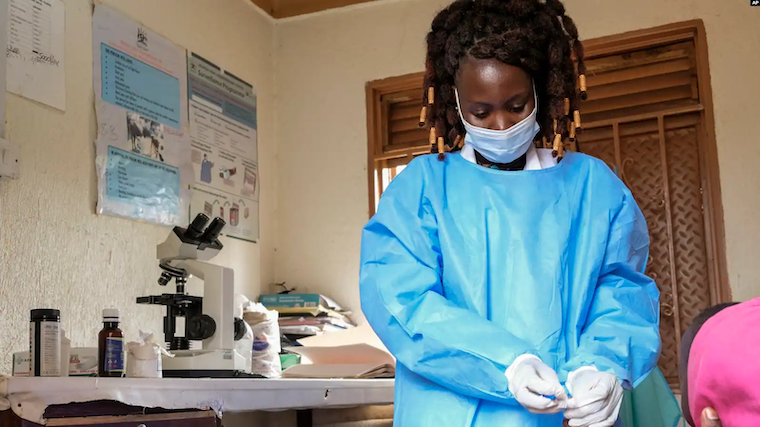 Medical lab assistant Mellon Kyomugisha, who said she was the first to examine the first confirmed Ebola victim when he came to St. Florence Clinic with malaria

The minstry of Health and the World Health Organization (WHO) are planning to try out two vaccines for the Ebola Sudan virus to try and curb the spread of the rare strain.

The virus has so far killed 19 people and infected at least 54 people in five districts in Uganda. After meetings in Kampala, the WHO's director general Tedros Adhanom Ghebreyesus described the new outbreak as troubling.

Uganda hosted ministers from 11 countries in an emergency one-day meeting Wednesday to align their preparation for and response to Ebola outbreaks and agree on a strategy for collaboration.

Speaking to journalists after the meeting, Dr Jane Ruth Aceng, Uganda’s Health minister, said the department is expecting two different types of vaccines for the Sudan virus of Ebola currently circulating in Uganda.

Both vaccines, according to the WHO, are pending regulatory and ethics approvals from the Ugandan government. Aceng says the vaccines, which are expected to arrive in the country next week, are in clinical trials.

The government reported the Ebola outbreak on September 20. The epicentre is the Mubende district, west of Kampala, with one death reported in Kampala itself.

WHO urged Uganda’s neighbours to increase their readiness to respond rapidly and efficiently, if needed. Dr Ahmed Ogwell Ouma, the acting director-general for the Africa Centers for Disease Control and Prevention, says African countries need to change the way they do things in times of outbreaks.

He said this includes strengthening institutions dedicated to health emergencies, strengthening the health workforce, local manufacturing and having action-oriented and respectful partnerships.

The WHO has released $2 million from its contingency fund to support Uganda’s Health Ministry and an additional $3 million to support readiness in neighbouring countries. Ogwell says such funds need to be prioritized.

The Sudan Ebola virus was first reported in southern Sudan in 1976. Several outbreaks have been reported since then in both Uganda and Sudan. The deadliest outbreak in Uganda was in 2000 and killed more than 200 people.