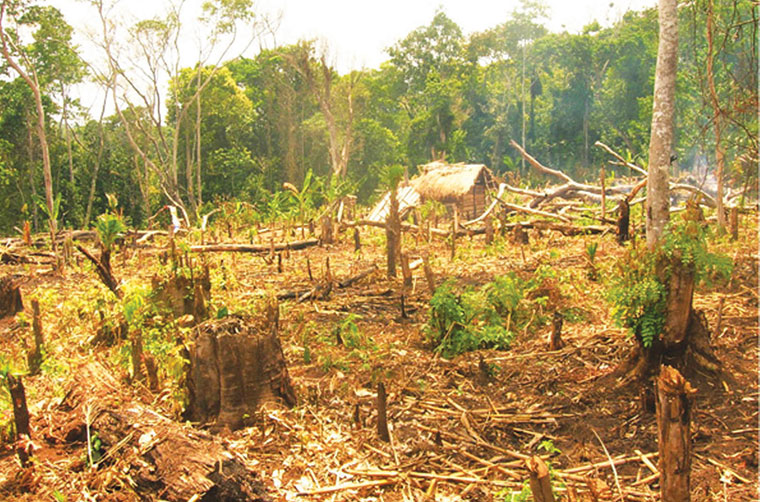 A ruined forest in Mpigi district

To enlist the expression of Chinua Achebe in describing the state of affairs in his native Nigeria, this time in the Ugandan context, and through a meteoric frame of reference; it’s safe to say that: “Uganda is on the brink of a precipice”— a climatic disaster!

This was written out in the recently released joint motion for a resolution on violations of human rights in Uganda and Tanzania linked to investments in fossil fuels projects by the European Union [EU] parliament.

The polarizing document best known for urging the suspension of the construction of the crude oil pipeline in part reads: “The extraction of oil would generate up to 34 million tonnes of carbon emissions per year.”

The EU parliament’s official paper notes that the International Energy Agency [IEA] cautions in a 2021 report that limiting global warming to 1.5°C to prevent climate change’s most destructive impacts, would require new oil and gas development to stop immediately.

This projection discourages Uganda from exploiting her natural resources, as doing so would aggravate the already hostile climate. What’s confusing is that as the West vetoes fossil fuel development in Africa, they ramp up development on their coasts!

Given the aforementioned background, one would wonder how climate change impacts daily life. Because in Uganda it is looked at as a Western crisis, and those who have stood up for this particular cause have been belaboured for being in search of a green card or donor funding.

To simplify the effect of climate change on Uganda, USAID in 2015 published a climate change fact sheet in which it noted that mean annual temperatures had gone up by about 1.3°C since 1960.

This might seem small but for every 1°C increase, lightning strikes rise by 12 per cent [Journal Science], consequently leading to wildfires; and resulting in the atmosphere holding more water vapour causing storms and unprecedented rainfall surges that flood and wash out property, life, and crop fields. Lightning also produces nitrogen oxides which are strong greenhouse gases.

A 1°C increase in temperature means less water available for mankind and intense and frequent heat waves whose outcome is dehydration, acute kidney injury, and death.

Sadly, global heating is irreversible: a Celsius gained can’t be shed off. It can only be maintained. Uganda’s rainfall amounts have not been spared either since they have dropped at an average of 3.4mm per month per decade.

This has translated into frequent severe droughts in the country, especially in the northern and western parts. Another unignorable economic impact of climate change is that it would wipe out up to 18 per cent of Gross Domestic Product (GDP) worldwide of the global economy by 2050 if global temperatures rise by 3.2°C, predicts the Swiss Re Institute.

For the Middle Eastern and African region, the institute articulates that even within the confines of the Paris target [below 2°C], those countries, Uganda inclusive, are bound to drop 4.7 per cent of their GDP.

The world’s largest reinsurer by net premiums — Swiss Re — forewarns that a 2°C temperature increase would blot out up to 14 per cent of the GDP of Middle Eastern and African countries.

That’s huge when compared to Europe which would lose 7.7 per cent of its GDP with a 2°C temperature increase. Therefore, the narrative of the climate crisis being ‘a Western climate goal’ alone is misleading because if push comes to shove, Africa stands to suffer more.

A direct result of climate change in Uganda is the frequent and severe flooding problem that has led to the fierce loss of lives, property, and infrastructure. As attested by a study conducted in 2020 by the International Organisation for Migration [IOM] of seven districts; and 73 sub-counties in flood-affected districts in Eastern and Western Uganda: Bududa, Bulambuli, Bundibugyo, Kasese, Manafwa, Sironko, and Namisindwa.

Over 248,210 people were affected by floods and more than 10,000 homes were destroyed with 132,345 people displaced rendering these people redundant since they can’t indulge in any productive economic activity.

These floods are a danger to agriculture, seeing as they have swept away gardens of crops and destroyed infrastructure — schools, roads; bridges, and hospitals. This is detrimental because agriculture and infrastructure are the backbone of Uganda’s economy.

Not only this, droughts have had the same damaging effect on Uganda’s economy. A 2008 National Drought Report by the ministry of Agriculture, Animal Industry and Fisheries, Office of the Prime Minister, and the Department of Disaster Preparedness and Refugees reads: “Uganda has experienced cyclical [within a range of 10 to 12 years], frequent and severe droughts in most parts of the country”.

This report discloses that up to 2,081,000 people have been affected by the droughts that ravaged Uganda in January 1998, August 1999, June 2002, and March 2005. These dry spells ended in chronic food insecurity, reduced water levels, unbearable temperatures, death of livestock, and a decline in the size and quality of produce especially in the absence of functional irrigation systems, directly impacting the economy, albeit adversely.

Moreover, 50 to 80 per cent of economic losses caused by natural disasters are uninsured and are supported by loans. This means that if they are wiped out, the businesses and financial institutions that provided these loans make giant losses.

Major industries and sectors in the economy that are not adjusting to net zero [global campaign to reduce greenhouse gases to slim quantities], face the risk of being globally blackballed by donors and prospective business partners, who on their part are seemingly doing their best to reduce their carbon footprint, and would rather not identify with elements that are not mindful of the environment.

Because of this, the government is inevitably going to pick up expensive loans from the World Bank and IMF under the guise of transitioning to clean energy. This will add to the already dire debt problem, considering most of the loans will be swindled and new ones taken out. Denoting that the borrowing cycle will continue ceaselessly. For what it’s worth, Uganda has taken measures to tackle the climate change problem.

For instance, it passed a bill into law — The National Climate Change Act in 2021. The country was also well represented at the UN climate change conference in Scotland in 2021 and is a signatory to the Paris Agreement.

Even so, Uganda’s commitment to climate change is confusing because, on one hand, it preaches and practices a contrarian climate change gospel: going ahead with preparations to produce fossil fuels, used imported cars are a sensation in the country, charcoal made from cutting trees is still the most prevalent source of domestic fuel.

And on the other hand, it signs and attends climate change agreements and conferences. Apart from passing a climate law to piggyback the extraction of oil, I am confident that the talk of formulating a climate change policy by government officials and technocrats is simply to find away to take a swig of the $100 billion set aside by the world’s richest countries to fight the climate change crisis under the umbrella — climate financing.

This obligation hadn’t yet been met by the said countries but according to a report: Forward-looking Scenarios of Climate Finance Provided and Mobilised by Developed Countries 2021–2025, the financing is likely to commence in 2023 hence the galvanized policy-making in Uganda.

The author is an independent financial and investment analyst.

+1 #1 kabayekka 2022-10-07 14:33
Seriously speaking this country with climate change seems to be appreciated more by the poor of this country. They have saved and bought to try the new solar technology.

Such technology is expensive, imported and heavily taxed. But when one goes up country, one finds the very poor trying hard to be friend and process solar energy.

One would have wished for the windmill and wind vanes to be introduced for energy production as tropical winds are ever present on the continent of Africa.
Report to administrator
+1 #2 kabayekka 2022-10-07 14:46
Most of the poor as named peasants are very much eager to plant trees. It is their tradition. But the ministry of Agriculture and Forestry and NEMA are fast asleep!

For a simple example there are no courses on how to plant, and maintain trees to build up new forests. These days in the countryside one sees many old age trees dying and killed by all types of plant parasites loaded up on their branches.
Report to administrator