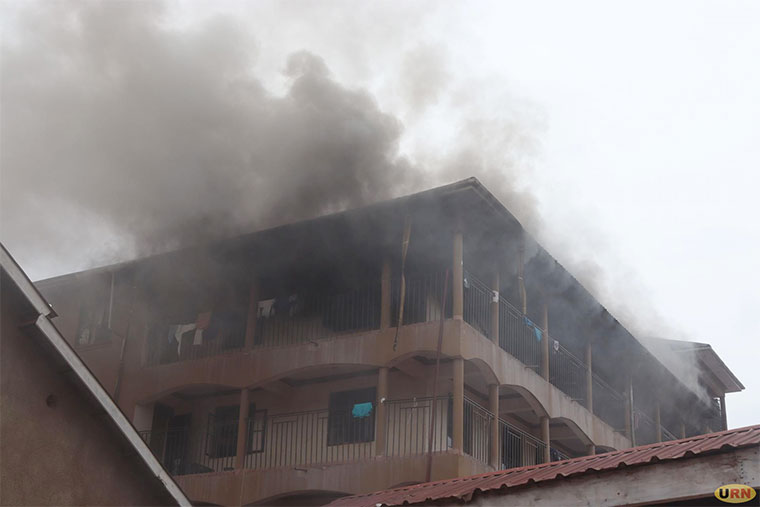 Part of the building on fire

Fire has gutted Kaguta and Lumumba boys' dormitories at Kabale Brainstorm High school in Kabale municipality. The fire broke out in the dormitories of the privately owned school belonging to local businessmen, Erasmus Habasa and Alex Baguma at around 2:30 pm Tuesday.
The dormitories have been housing more than 60 senior four and six students. Yared Ndyamuhaki and Junior Tumuramye, both senior four candidates say that they had returned to class after lunch when they saw huge smoke coming out of the three-storied building. He says that upon rushing to check what was happening, they were shocked to find fire razing the dormitory.

Isayah Turihabwe and Arnold Aronda say that the fire reduced their property including beds and books among others to ashes. They said the incident would gravely affect the candidates whose property, especially books were completely burnt.
The police fire and rescue team first struggled to put out the fire because the fire tender failed to access the school premises due to the small gate. This prompted students to use buckets and jerrycans to fight the fire. Bernard Bikorwomuhangi, the school head teacher says that the incident did not cause injury or death to any student. He says that the affected students will now share accommodation with their classmates.