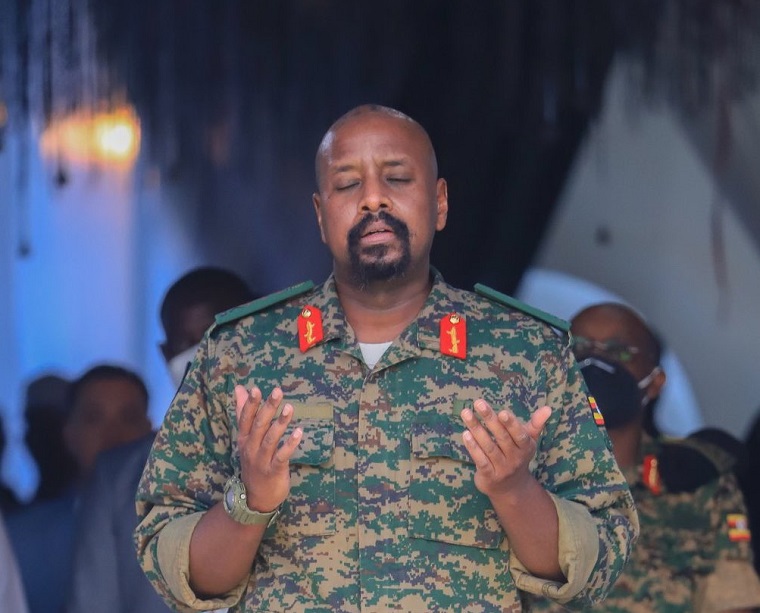 President Yoweri Museveni has fired his son Muhoozi Kainerugaba as the commander of Land Forces, a day after he caused a diplomatic storm when he threatened to capture Kenya within two weeks. After dropping him, he promoted him to General, the highest rank in the Uganda People's Defence Forces (UPDF).

Muhoozi is replaced by Maj Gen Kayanja Muhanga, the current commander of Operation Shujaa who has since been promoted to Lt Gen, according to a statement from the UPDF. Muhoozi announced through his official handle, @mkainerugaba that he was on a mission to raze colonial borders and capture Nairobi.

It wouldn't take us, my army and me, 2 weeks to capture Nairobi.

The tweets which covered feeds since last evening sparked an online rage between Ugandans and Kenyans. Early this afternoon, the ministry of Foreign Affairs issued a statement reaffirming that Uganda treasures the existing strong bilateral relations between Uganda and Kenya based on the shared history between the two countries, common values, mutual respect, trust and the desire to build a unified East African Community.

The ministry added that the government of Uganda does not conduct its foreign policy and other official business through social media nor depend on social media sources in dealing with other sovereign governments.

While the discussion ensued, Muhoozi tweeted that he had held a discussion with his father Museveni and informed him that the younger East Africans have decided to make East Africa one nation. He however added that they had agreed on some changes, which would be announced later in the day.

“…Had a good discussion with my great father this morning. Apparently, my tweets scared Kenyans too much. He will announce the changes. There is a special prayer I shall make for our army,” Muhoozi said.

He added that during the discussion, he told his father that the younger East Africans have decided that they will be one nation and no amount of threats will stop them from that goal. Muhoozi has since edited his Twitter handle and removed the position of commander of Land forces. He has now replaced it with senior presidential advisor/special operations. It is not the first time Muhoozi's tweets are setting him on a clashing path with his father.

In April this year, during Muhoozi's birthday celebrations which were attended by Rwanda President Paul Kagame, Museveni publicly attacked his son and said his tweets might cause diplomatic troubles with other countries. President Kagame offered to edit Muhoozi's tweets before he posts.

Although Ugandans took Muhoozi's tweets about capturing Kenya as a joke, a large section of Kenyans seem to have taken them seriously with several politicians calling on President William Ruto, a close ally with Museveni to make a statement. Ruto brushed the tweets off and said they were the usual jokes Muhoozi usually makes on Twitter. After his sacking, Muhoozi has instead accelerated his Kenya tweets.

After capturing Nairobi, I shall take my wife on a tour of our district. pic.twitter.com/p8WXXG6qMr

After we create our East African Federation. President Museveni will be President, Afande Ruto will be Vice President, My brother Uhuru will be Foreign Affairs Minister. I just want to be CDF of the East African forces. 😊 pic.twitter.com/4hDOjP7Fn8

Union is a MUST! No honourable men can allow these artificial, colonial borders anymore. If we our generation has men then these borders must fall! pic.twitter.com/60E9nzKIqI

That's a trick between the son and dad. It is the only way he could live the army and start the campaigns of 2016.

They sat and organised the way how to do it. Ruto must have been involved to make sure he's aware of what they want to do. You fire and then promote? we are not fools Mr. Tibuhaburwa. But just know that we are everywhere watching what you are trying to do!

Unfortunately it’s only fools who are everywhere watching but not doing anything and in the end Museveni and the family gets what they want.

How can you justifiably say we Ugandans aren’t fools? The truth is that Ugandans ARE FOOLS!

We know what we want but we continuously quietly accept what we don’t want and move on. Inchi ya watu wajinga sana! Bitter but true.
Report to administrator
+4 #22 Odokonyero 2022-10-05 09:12
You are absolutely right! Muhoozi speaks for the father what they chat over at mealtime.

Of course the Owiny Dollos, the Anita Amongs of this Uganda are not privy to such chats, remember the biblical Lazarus and the rich man please.

We call and laugh at seemingly jokes but in the end they become realities, why don’t we outrightly reject “stupid jokes?”
Report to administrator
0 #23 Webz 2022-10-05 14:51
Quoting rwigyema noah:

i am convinced this was a systematic way of removing Muhoozi from the Public eye, to prepare him for a 2026 presidential bid, there is a high chance Museveni wont stand again in 2026.. he is setting up his son for the big chair, while reminding the West of the big picture, a united East Africa, One Nation.. and yes it would involve some military action to tie up loose ends. These guys use reverse psychology but theyre planning ahead. anyway MK2026

Sack/promotion is a positive contradiction for the first family. I support it. Let Muhozi come on as preident. When he fails to make one East African Republic by diplomacy, he'll use force.
Report to administrator
0 #24 Mubiru 2022-10-05 15:15
My fellow fools can anyone remember what happen to Amin when he attacked Tanzania? At least I remember that many fools called it a joke when he announced the attack. God help us.
Report to administrator
+1 #25 Remase 2022-10-05 19:21
Odokonyera, we are beyond fools! I really don't know what comes after fools but it's clear we are beyond that@ Fire and promote, fire but promote, right? Only in Uganda!

Whee else do you have a govt run by a family and tribesmen? After looting NSSF, the he wife says, I must be the minster of education and she is, the says I will invade Kenya and he is promoted to the highest rank, General!

After the brother robbed the money of the ministry of defence when he bought junk helicopters, he said he wanted to be a minster, he was made the minster of microfinance! The daughter says, she wish she can fly, she jumps in the presidential Jet to German!
Report to administrator
123