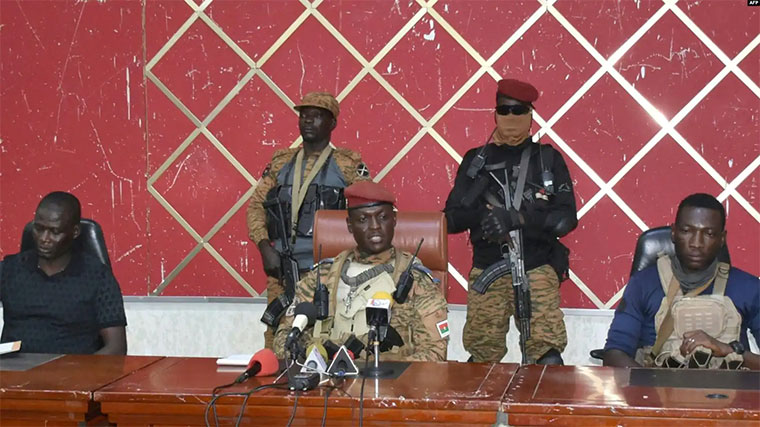 As a heavily armed convoy drove through a cheering crowd in Burkina Faso's capital on Sunday morning, the boyish face of the country's latest military ruler, Captain Ibrahim Traore, emerged from the turret of an armoured personnel carrier.

Sporting fatigues and a red beret, the 34-year-old smiled and raised his thumb as onlookers welcomed him, some by waving Russian flags. Traore, a relatively low-ranking officer who days earlier was running an artillery regiment in a small northern town, has been catapulted onto the world stage since he and a group of soldiers overthrew President Paul-Henri Damiba in a September 30 coup.

Little is known about Traore and his colleagues, who since Friday have delivered statements on national television brandishing guns, ammunition belts and masks. They face gigantic challenges to alleviate hardship in one of the world's poorest countries where drought, food shortages and creaking health and education systems provide daily challenges for millions.

Yet the initial focus has been conflict and politics. In an interview with Radio France International on Monday, Traore, a career soldier who has fought on the front lines against Islamist militants in the north, insisted he would not be in charge for long. A national conference will appoint a new interim ruler by the end of the year. That leader, who could be civilian or military, will honour an agreement with West Africa's regional bloc and oversee a return to civilian rule by 2024, he said.

"We did not come to continue, we did not come for a particular purpose," he said. "All that matters when the level of security returns is the fight, it's development."

Still, an early picture has emerged of what Traore's junta intends to do with its time in power. Their moves, which may include army reform and ties to new international partners such as Russia, could alter politics in West Africa and change how Burkina Faso fights an Islamist insurgency that has killed thousands and forced millions to flee.

Army officers initially supported Damiba when he took power in his own coup in January, promising to defeat the Islamists. But they quickly lost patience. Damiba refused to reform the army, Traore's junta said. Attacks worsened. Just last week, at least 11 soldiers were killed in an attack in the north. Meanwhile, Russia has expressed support for the coup just as regional neighbours and western powers condemned it.

"I salute and support Captain Ibrahim Traore," read a statement from Russian businessman Yevgeny Prigozhin, founder of private military company Wagner Group, which has operations across Africa, including in Burkina Faso's neighbour Mali.

Ties with Russia would put a further strain on relations with former colonial power France, which has provided military support in recent years but has become the target of pro-Russian protests. Its embassy in Ouagadougou was attacked in the aftermath of Friday's coup.