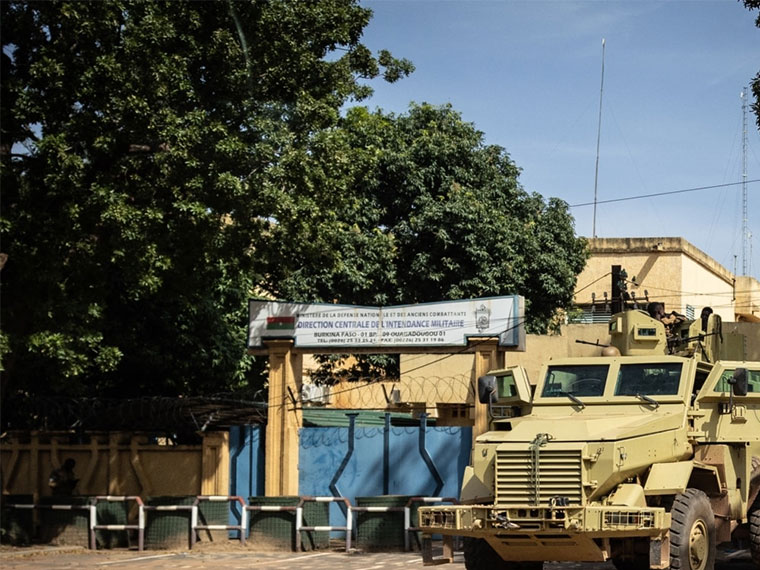 In downtown Ouagadougou on Saturday afternoon, soldiers that helped bring about a military coup the night before lay prone behind cover at a strategic junction in the city. The day before, they had seemed at ease. Businesses were closing, as many feared retaliation against the putschists by a faction of the army that still supports the now-ousted president, Paul Henri Damiba.

VOA was able to speak to local people about the apparent change in leadership, as Army Captain Ibrahim Traore, becomes the new head of the country’s junta. One trader, who declined to give his name, near where the soldiers had cordoned off the centre of the city, told VOA he supported the coup.

“What we want is peace,” he said. “It is not about politics; we just want someone who will give us a better result [in terms of security]. When you look at the number of victims, it exceeds even that during the former [democratic] president’s time... It’s no use, [Damiba] hasn’t changed anything.”

The former junta, run by Damiba, justified the coup it instigated in January on the promise it would resolve the country’s security problem within two years, according to analysts. Data from the Armed Conflict Location and Event Data Project shows security has not improved in the last eight months.

Asked if he thought the new junta could improve the situation, another trader, who also said he supported the coup, told VOA, “I think we should always try; I think we shouldn’t say we can’t, because where there is a will, there is a way. So, I think that those who made the coup know that things are not going well within the army and that they will be able to bring peace.”

But many are not celebrating the arrival of the new junta. On Friday, Mathias Ouedraogo, leader of the civil society organization Generation de Veille Citoyenne, took to the street with other protesters in support of Damiba.

He said change at the top has never been a solution. “The changes in leadership since 2015 have not benefited us. So we remind our brothers in arms, our elder brothers, our younger brothers, and all Burkinabes. Let us not divide the army any further. With an army that is divided, the enemy will get the better of us."

Michael Shurkin, an analyst with 14 North Strategies, a Washington-based consultancy, said the new junta is unlikely to do much to improve security.

“The chances that this captain, who is replacing him, has better ideas and will make better decisions is really very doubtful,” he said. “I think he’s kidding himself and there’s a failure to recognize the enormity of the challenges in front of them and how hard it is to accomplish all the things they’re going to have to accomplish in order to save their country.”

Saturday afternoon, members of the new junta appeared on TV again to claim that France is sheltering Damiba at a French special forces base on the outskirts of Ouagadougou and is looking to reinstate him as president. The French embassy had already released a statement officially denying the rumors earlier in the day.

Gunshots rang out Saturday in  Ouagadougou and soldiers deployed in the streets as tensions lingered a day after the coup. The whereabouts of ousted interim president Lt. Col. Paul Henri Sandaogo Damiba remained unknown, and his opponents accused him of seeking refuge at a French military base. France vehemently denied that it had anything to do with the developments in Burkina Faso, saying it never hosted Damiba in the military camp nor the embassy.

Capt. Ibrahim Traore, who was named in charge after the Friday evening coup was announced on state television, said in his first interview that he and his men did not seek to harm Damiba.

“If we wanted, we would take him within five minutes of fighting and maybe he would be dead, the president. But we don’t want this catastrophe,” Traore told VOA. “We don’t want to harm him, because we don’t have any personal problem with him. We’re fighting for Burkina Faso.”

Roads remained blocked off in Ouagadougou, the capital, where a helicopter could be heard flying overhead. An internal security analysis for the European Union seen by The Associated Press said there was “abnormal military movement” in the city.

As uncertainty prevailed, the international community widely condemned the ouster of Damiba, who himself overthrew the country’s democratically elected president in January. The African Union and the West African region bloc known as ECOWAS sharply criticized the developments.

“ECOWAS finds this new power grab inappropriate at a time when progress has been made,” the bloc said, citing the recent agreement that Damiba had made to return to constitutional order by July 2024.

After taking power in January, Damiba promised to end the Islamic extremist violence that has forced 2 million people to flee their homes in Burkina Faso. But the group of officers led by Traore said Friday that Damiba had failed and so was being removed. The new junta leadership said it would commit “all fighting forces to refocus on the security issue and the restoration of the integrity of our territory.”

But it remains to be seen whether the junta can turn around the crisis. Concerns already were mounting Saturday that the latest political volatility would further distract the military and allow the jihadis to strengthen their grip on swaths of the once-peaceful country.

Damiba had addressed the nation in September, claiming “our efforts have begun to bear fruit at the military operational level.” Yet only two days later, a roadside bomb struck a military convoy in the north, killing at least 35 people.

This week, at least 11 soldiers were killed and 50 civilians went missing after gunmen attacked a supply convoy in Gaskinde in Soum province in the Sahel. Friday’s developments felt all too familiar in West Africa, where a coup in Mali in August 2020 set off a series of military power grabs in the region. Mali also saw a second coup nine months after the August 2020 overthrow of its president, when the junta’s leader sidelined his civilian transition counterparts and put himself alone in charge.

Chrysogone Zougmore, president of the Burkina Faso Movement for Human Rights, called the latest overthrow “very regrettable,” saying the political instability would not help in the fight against Islamic extremist violence.

“How can we hope to unite people and the army if the latter is characterized by such serious divisions?” Zougmore said. “It is time for these reactionary and political military factions to stop leading Burkina Faso adrift.”

Some days, the youngsters will take matters into their own hands, if the older generation cannot give the chance to determine their own future by clinging onto power until death. It will be tragic for the country.
Report to administrator