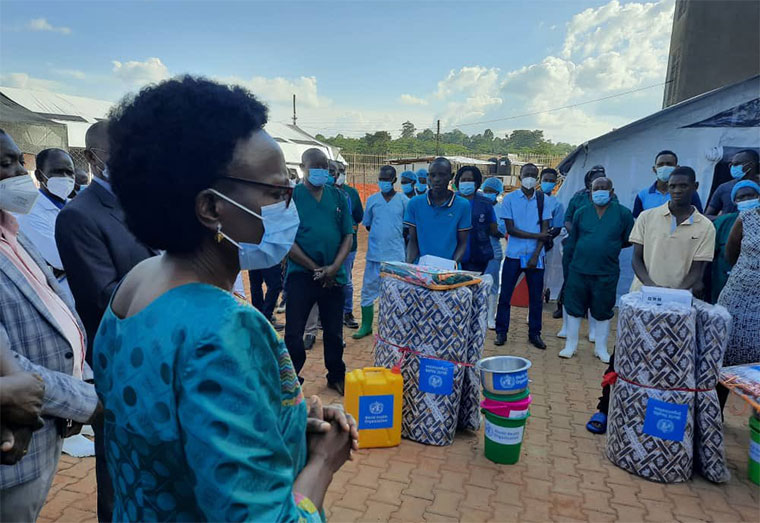 Ebola virus disease survivors should abstain from sex (including oral sex) for at least a year to prevent their own reinfection or infection of their partners, Health minister Dr Jane Ruth Aceng has said.

Aceng said that although other health experts recommend 6 months, she is recommending one-year abstinence to allow for total healing. According to Aceng, men should avoid having sex with their wives because they might not sustain using condoms throughout yet the Ebola virus takes longer to completely heal from the men’s genitals.

"So you have to be very careful if you decide that you're going to use a condom please, period coz you don't want death in your house. However, the best is to protect your wife and protect all the other women. As I have told you, you may have your negative certificate, but somewhere there, it will be hidden," said Aceng.

Aceng made the remarks while witnessing the discharge of two Ebola patients from Mubende Regional Referral hospital after they were successfully treated and finally tested negative for the virus. The discharge of the two men; Jeremiah Nkyogaza a Rwandan national working in Madudu village and Alex Sengoba from Kisamula village; now leaves a total of 40 patients admitted at Mubende hospital. She also explained that the discharged persons were provided with new beddings and clothes because the ones they came with were destroyed because they were infected with the Ebola virus.

However, she warned that although the two men were provided with certificates indicating that they are negative, the virus could still be hidden somewhere in their bodies which could be dangerous for their wives and other women they will have live sex with. The minister also toured Madudu health centre III where she commissioned the second isolation centre which was established to help people easily access treatment without trekking long distances.

Aceng also appealed to the people in villages to desist from eating wild game meat. She appealed to the community in Madudu to be vigilant and report all the contact persons to the authorities reasoning that the earlier people seek medical advice, the easier it becomes for them to get treatment. Aceng warned that when patients present with advanced signs of bleeding from all body openings, it might be too late for them to get healed from Ebola. She asked those discharged to be ambassadors to show the public that Ebola can be treated and that the people in their respective areas have been counselled to accept them.

Dr Pascal Opio, the leader of Ebola treatment team said that the discharged patients were treated for about 8 days and took 4 days under monitoring and they are in good health and have undergone psychosocial counselling to be able to go back and reunite with their families. The government on September 20 this year confirmed the outbreak of the Ebola in Mubende district.

Mubende district authorities say that more than 350 people who were in contact with Ebola-affected persons have been tracked and are undergoing assessment at the hospital as a measure to mitigate the virus spread. The district has since spread to three other neighbouring districts.

"Studies have shown that Ebola virus can be isolated from semen up to 82 days after symptom onset and recent virus-persistence studies identified genetic material (RNA) from the virus by nucleic acid amplification tests e.g RT-PCR 406 days after symptom onset, beyond the period of virus detectability in the blood of survivors and long after recovery from illness.

Ebola virus RNA has also been detected by RT-PCR in vaginal fluid from one woman 33 days after symptom onset (DR Congo, 1995). Live virus has never been isolated from vaginal fluids. With such limited data, it is not known for how long virus typically persists in vaginal fluids, or whether it can be sexually transmitted from females to males."
So, there's still a possibility of a wider spread given this little available data.
Report to administrator
+2 #2 Akot 2022-10-02 19:43
Every woman MUST abstain from sex as long as Museveni rules, as there is no future for children, except those of;

World situation is getting worse as demon Putin maintains war on Ukraine & Ugandans' situation will be worse while Museveni enjoy their miseries!

Ugandans, no one can force you to say NO to the tribalistic system & UNITE to block & show Museveni way out!

But you MUST NOT go for next fake presidential, parliamentary, local elections to legalise, officialise, constitutionalise your enslavement, miseries, poverty, knowing Museveni will rule for life & will leave tthe post to his son!
Report to administrator
0 #3 Lakwena 2022-10-04 09:05
But Dr. Aceng also!

In other words, where was Musao Aceng to advise the people who survived Ebola pandemonium in Gulu (more than 200 dead), in 2000?

And what could have happened to the men she did not advise to abstain from sex for one year?
Report to administrator