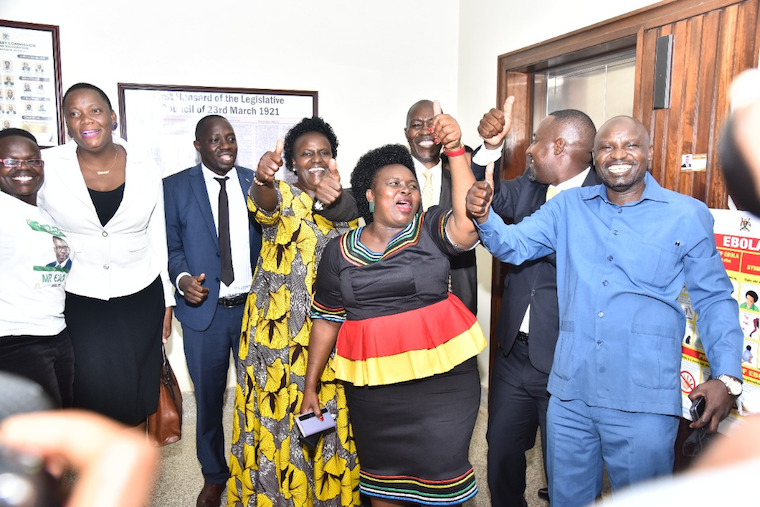 Some of the newly elected MPs

The ballot numbers have failed to tally in the just concluded East African Legislative Assembly (EALA) election. Ugandan MPs today took to the polls to elect the country's nine representatives at the regional legislative body.

According to the rules of procedure governing EALA elections, each MP is presented with a single ballot paper containing the names of all those contesting for him or her to choose nine of the contestants. In today’s election, 28 candidates were nominated to participate.

However, a close look at the figures by URN shows that more people than those who were eligible could have participated in the election. It should be recalled that the National Unity Platform the biggest opposition political party in parliament boycotted the elections and its members were not present.

NUP has got 57 MPs. When you take the first figure given by the speaker of 495 and you add to it the 57 NUP MPs, you get 552 MPs, which is over and above the total number of all MPs in the 11th parliament by 23 MPs.  If still you take 478 as the total number of the MPs who have voted today, the number would be over by six MPs.

It should be recalled that both the speaker and deputy speaker are not allowed to vote. Therefore, this would increase the illegible voters in the first instance from 11 to 13 and from six to eight more illegible voters respectively.

Several MPs said there are a number of their colleagues who are even outside the country, a case in point is Betty Awol, the former leader of the opposition who is said to be in Israel. So, if this is factored in, it increases the number of illegal voters even further.

Earlier in the day, the MP for Aringa South Alioni Odria briefly interrupted the proceedings of parliament claiming that as MPs were busy listening to contestants, ballot boxes were already being stuffed.  Odira, who was shouting at the top of his voice, wondered how ballot boxes had pre-ticked ballots before polling stations were opened.

He kept shouting until the deputy speaker threatened to throw him out of the chambers if he didn’t stop shouting. However, about 10 minutes later, Tayebwa read a letter from the speaker of parliament Anita Among stating that she had authorized several MPs to vote early as they had commitments elsewhere.

After the declaration of the elections, Bugiri Municipality MP Asumani Basalirwa requested that in future parliament considers amending some aspects of the rules governing EALA election like giving the speaker-specific powers to allow for early voting to forestall accusations of vote rigging like those raised today by Odria.

Democratic Party’s (DP) Gerald Siranda is the only opposition candidate who sailed through the election with 233 votes. His choreographed election follows a cooperation agreement signed between President Yoweri Museveni and DP President General Norbert Mao. One of the clauses in the agreement was for NRM, which boosts of majority in parliament to support Siranda for EALA.

In the other results, Harold Scandrone Kaija of the FDC scored 99 votes, Fred Ebil of UPC 139 votes and Muhammad Kateregga of Jeema scored 36 votes.

The assembly has a membership comprising nine members elected by each partner state; ex-officio members consisting of the minister or assistant minister responsible for the East African Community Affairs from each partner state; the secretary-general and the counsel to the community.

Currently, the assembly has 54 elected members; and 8 ex-officio members. Each of the EAC member countries has to send nine legislators to the Arusha-based assembly. The term of the current EALA members ends this year and elections are scheduled for December.

Elected representatives to EALA from the seven member states of Kenya, Rwanda, Tanzania, Uganda, South Sudan, Burundi, and the Democratic Republic of Congo (DRC) serve a five-year tenure. The current 4th Assembly has 62 members, whose term commenced in 2017.

According to Article 50 of the East African Community Treaty, members are elected by their respective country's national legislature. Article 50 also requires the said members to reflect their country's political parties, opinions, gender composition, and other special groups.