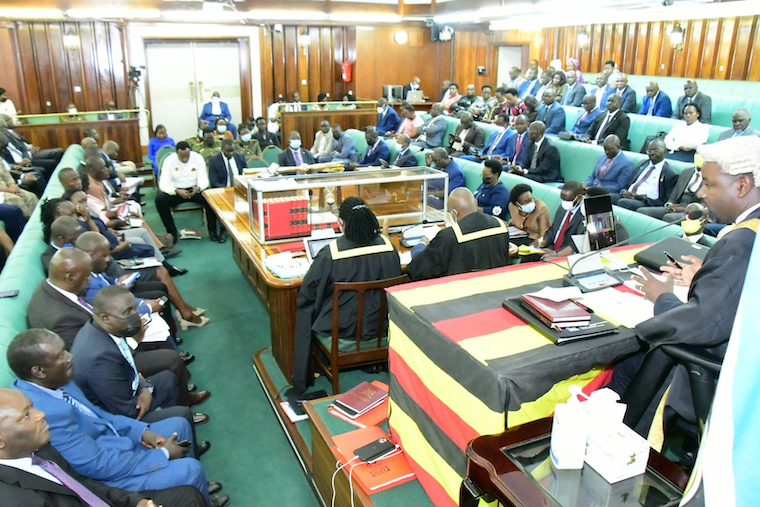 Thomas Tayebwa presiding over the house

The government has been tasked to explain the latest wave of state abductions of opposition supporters that have swept across the country.

The opposition National Unity Platform (NUP) has presented video evidence of some of its supporters being abducted by both armed and non-uniformed armed men in Wakiso, Mukono, Kampala, Masaka driving in the infamous drone vehicles.

Although in the past government committed to present all people who were previously arrested to be presented in court, yesterday Wednesday, the deputy prime minister and minister without portfolio Rukia Nakadama Isanga said it is absurd that state abductions are back as reported by The Monitor this week. However, she asked parliament should give the minister of Security Jim Muhwezi more time to explain the matter.

The latest wave of state abductions comes at a time when the ruling National Resistance Movement is under global scrutiny after its human rights violations record was presented as one of the reasons why the regime's most anticipated oil pipeline be halted for at least a year, pending a review by environmentalists and human rights activists.

"Rt Hon speaker of course it is absurd. We have seen what has been put in this parliament by the leader of opposition. It is not good of course. I request that we give the minister of Security time to come and give a statement since we have even new abductions that we have seen in the papers," said Nakadama.

Nakadama’s comment followed a presentation by the leader of opposition in parliament (LoP) Mathias Mpuuga who said that they were concerned about the renewed wave of abductions.

Mpuuga who presented a list of people said to have been arrested and whose whereabouts are unknown, said government should come clean and tell the country whether these people are still alive or dead so that they are given a fitting burial.

"We have reports from a number of people abducted either from places of work or waylaid by people in uniform and non-uniform in the infamous drones Rt Hon speaker. Around May this year, this house instructed the ministers of Security and Internal Affairs to account for the citizens I tabled here as disappeared. I did not only table their names but included contacts of their families for government to follow up and account. To date, Rt Hon speaker no accountability has ever been given, but instead, more people have been abducted and kept incommunicado. Those who have resurfaced one way or another, resurface tortured and bruised, others are dumped at police stations...The record of this country is that while you're in government, citizens were abducted," said Mpuuga.

Deputy speaker of parliament Thomas Tayebwa said the government should respect its commitment to resolve all issues arising from illegal arrests. He said MPs from both the opposition and ruling party agreed that government should in three months, come out and explain the steps taken to address issues raised in the parliamentary report on human rights and prisons.

"Colleagues, we extensively discussed this matter. This was around like a month ago. I think we handled two critical reports - a report on human rights which the committee presented and it was very detailed. We also had a report on state of prisons which touched on some of these issues. And really, there was a commitment here that indeed some of these issues were glaring and they were making us look ugly. This report was signed by members from both sides. We never even had a minority report on this issue. We gave you 320 of our rules of procedure. We gave the minister 3 months to submit an action taken on the recommendations of the house on both reports. The new reports that we have seen in The Monitor, government what is going on? The LoP has raised issues I can't answer for you," said Tayebwa.

Tayebwa ruled that on Friday this week the prime minister, the leader of opposition, the shadow minister for security, the government chief whip, the opposition chief whip, the ministers of security, and internal affairs should meet and discuss how to handle the issue.

Speaking to URN separately, NUP secretary general David Lewis Rubongoya said they have a list of over 30 people who have been abducted and their whereabouts remain unknown.

He said as a party, they have many other members who have been arrested for no reason other than their political views. Rubongoya said even when they have gone to court and obtained orders for the unconditional release of their members, these have been ignored. Rubongoya added that currently, the party is soldiering the burden of looking after more than 100 children of their supporters some of whom have been in prison from as far as November 2020.

"Over 30 people. Initially, we thought they were like 20 now the list has grown to over 30. The list that the [NUP] president shared the other day didn't include many people who were abducted from greater Masaka and those other areas, who, our leaders are bringing to our attention. In 2020 in November you know what happened. They abducted so many people up to now we don't know where they are. Our legal team has been doing its best to follow up on these cases, moving to all prisons, different police stations together with our welfare team to no avail. There are so many people still missing and what we can do is go to court and get habeas corpus orders for some of these people - which habeas corpus orders were ignored by the regime," added Rubongoya.

At least 54 people were killed as per the police report, during the November 2020 riots that followed the arrest of then-presidential candidate Robert Kyagulanyi Ssentamu of the National Unity Platform.

Other than those killed during the demonstrations, hundreds of others particularly youths were rounded up and arrested, many of whom were never charged in courts of law. The second round of arrests also transpired in the days leading to the swearing-in ceremony of President Museveni in May last year.

Security then said that those arrested were planning to interrupt the president’s swearing-in ceremony. Some of these have been charged in the army court while others have never been seen again.

-3 #1 Musana 2022-09-29 09:42
May I have feed back on what I posted here yesterday, please-just in case it was inappropriate. Thanks
Report to administrator
+4 #2 Jose 2022-09-29 10:23
Abductio s are ok
While you are preside t,abduct n kill so that when you eventualy go and ur relatives n children are abducted you tell its ok to be sbductedhebxd
Report to administrator
+11 #3 Lakwena 2022-09-29 10:42
But Deputy Speaker Tayebwa, since it now self-evident that it is on behalf of the government that the kidnappers are taking the law into their hands; what should stop Ugandans from also taking the law into their hands: to maroon, block and lynch these bastards at the scenes of their crime against innocent Ugandans?

And let's see how far the state sponsored kidnappers will go.

Otherwise, for how long should innocent Ugandans be subjected to arbitrary arrests, kidnap, forced disappearance, torture, murder, indefinite detention without trial and/or denial of bail?
Report to administrator
-18 #4 kambarage 2022-09-29 15:32
State is state everywhere even in the US any goon that tries to disrupt the orderly conduct of government business risks death in action or arrest.

Please inform our young people that this is what they risk when they come to the streets to attack policemen and people doing their own business.

State cannot just look on as order is disrupted, moreover by enemies of their commander in chief. So pursue the legal process always.
Report to administrator
+12 #5 Zaitun 2022-09-29 15:49
What we have not understood is that: these crimes were premeditated, planed and now put in execution. Why? Simply to anihilate Ugandns and put in their place a new group of people, their own kins.

What was long planed while they were still in Tanzania the in the bush is now put in practice.
Ask yourselves this simple question: where have all those top military officers of Ugandan origine gone if not killed and why?

Unless we understand the political, social and economic reasons for their demise, and understand this hard but cruel fact, we Ugandans will continue to be considered inferior human specimen by these group of henious and organised criminals and rogues who are all out to sweep us under the carpet.

We know what happened to those who were happy to be with them but ended up in graves!
If we continue like sleeping dogs next to meat, we shall wake up only to find bones devoid of meat.

Yes, that will be the Uganda we shall inherit for our children!!!
Report to administrator
+2 #6 MR 2022-09-30 08:48
Sincerely 3 MONTHS to present a report on illegal arrests and detaintions of Ugandans and opposition MPs fell for that nonsense/delay action tactic by gov't?

Loo here the law says present them to court within 48 hours of arrest. Anything more should be considered an illegal act and evidence of nrm dictatorship & illegal use of power.