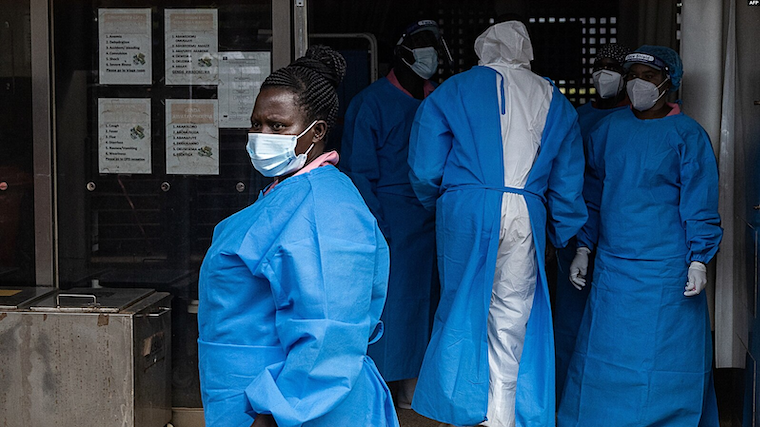 As Uganda reports more deaths from the latest Ebola outbreak in the country, medical interns at the hospital handling most of the cases have gone on strike.

The interns say they are not being provided with adequate personal protective equipment against the deadly virus, which causes a hemorrhagic fever. Uganda's Health ministry has so far confirmed five deaths and 18 probable fatalities out of 36 cases.

Ugandan Health officials say they are holding talks with striking interns at Mubende District hospital, which is handling most of the country’s spreading Ebola outbreak.

President for the Federation for Uganda Medical Interns, Dr Musa Lumumba, says there is not enough personal protective gear for the interns at the hospital. Speaking to VOA by phone, he called on the ministry of Health to urgently address the issue to protect doctors-in-training.

Uganda Medical Association president, Dr Samuel Oledo said one intern, three staff, and a medical student have been confirmed for exposure to the virus and at least three senior health officers (SHO) are showing symptoms.

"We have 34 interns in Mubende. And we have less than 12 doctors employed on the ground,” Oledo said. “If you have interns and they are pulling out at once, it's catastrophic. And the justifications are clear, honestly. Results have come out today and one of the SHOs who actually performed surgeries with one of the interns on one case has become positive of Ebola."

Oledo said they suspect as many as 104 medical students in Mubende hospital have been exposed to the virus. Ministry of Health has yet to confirm the exposures and infections of students and staff at the hospital.

Ministry spokesman Emmanuel Ainebyoona denied there is a lack of protective equipment there to guard against Ebola.

“All the protective gear to safeguard their life is available,” Ainebyoona said. “But like [with] any other infectious disease, fear will be expected. But we are working to ensure that we engage and counsel. And ensure that there are teams to respond.”

Despite the spreading virus, the Health ministry said the situation is under control but acknowledged that three people suspected of being infected with the virus fled Mubende’s isolation unit on Monday. Officials say security has been beefed up since to avoid a repeat.

Uganda’s Ebola outbreak was first detected last week in Mubende, a central district, but has since spread to neighbouring districts Kyegegwa and Kasanda. Some schools in Kyegegwa have shut down for two weeks to protect students.

First reports of a possible Ebola outbreak came from Kyegegwa’s Kyaka 11 refugee camp, raising alarm bells of a possible quick spread in the packed camp. But testing ruled out an outbreak in the camp.

“We are stepping up some assistance programs that had been curtailed due to lack of funding since July,” said Matthew Crentsil, the UNHCR Uganda representative. “That is procurement of soap. You would agree with me, this is fundamental in curbing the spread of Ebola.”