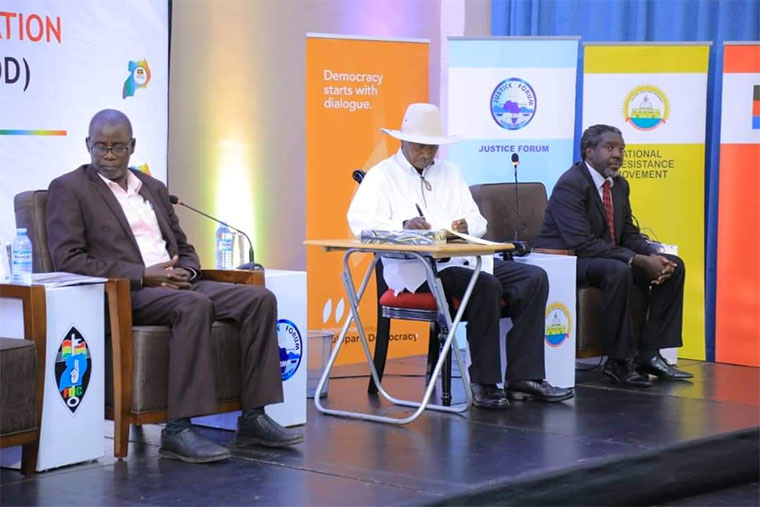 The Netherlands Institute for Multiparty Democracy (NIMD) has suspended its support to the Interparty Organisation for Dialogue (IPOD) until the National Unity Platform (NUP) joins the platform.

In a statement published on the NIMD website on Wednesday evening and confirmed by country director Frank Rusa, the institute noted that as a key partner of Ugandan political parties, it is ready to continue supporting the process toward a new memorandum of understanding for IPOD, and would only consider continuing to host the secretariat if IPOD is fully inclusive.

According to NIMD, inclusivity is a prerequisite for effective dialogue, arguing that it believes a dialogue process can only work when all political parties in parliament commit to speaking and listening to each other as they deal with the many challenges in Uganda.

Up until the 2021 general elections, all political parties represented in parliament had participated in IPOD.
"Now that the National Unity Platform (NUP), the leading opposition party in Uganda, has announced that they will not sign up to the new 2022 IPOD memorandum of understanding, and the Forum for Democratic Change (FDC) is hesitant to sign up, NIMD has to reassess its involvement in IPOD," reads the statement in part.

NUP, which is the largest opposition party in parliament declined invites to join IPOD, calling the organization a hoax that doesn't deliver on its mandate of promoting meaningful dialogue among political parties with representation in parliament.

NUP secretary general Lewis Rubongoya is on record, saying that IPOD is like a social club where party presidents meet to share a cup of tea, crack jokes and leave. Rubongoya and other top NUP officials like party president Robert Kyagulanyi Ssentamu have repeatedly indicated that they wouldn't join IPOD. In a media briefing on Tuesday, NUP spokesperson Joel Ssenyonyi reiterated their stand to stay away from IPOD.

On Tuesday, members of the IPOD council of secretaries led by their chairperson, the ruling National Resistance Movement (NRM) secretary general, Richard Todwong met with the minister of Justice and Constitutional Affairs Nobert Mao. They presented him with a list of concerns they needed him to resolve so as to strengthen IPOD.

Key among the issues was funding, having indicated that their funding from NIMD, an Institute which has hosted the secretariat since its inception in 2010 was being threatened by the NUP party activism in the diaspora. He asked the minister to see to the implementation of an earlier resolution to allocate 15 per cent of the money given to political parties with representation in parliament under the Political Parties and Organisations Act 2005 to IPOD to run its activities like training in parties, running the council and the summit (top meeting of heads of member parties) among others.

The parties received Shs 35 billion. In June 2022, NUP deputy Spokesperson Alex Waiswa Mufumbiro, Kyadondo East MP Muwada Nkunyingi, and NUP chief mobiliser Fred Nyanzi led their members in the diaspora in a protest at the NIMD headquarters in The Hague. They demanded that NIMD suspends its support to IPOD, which they accused of serving the interests of President Museveni.

Waiswa told URN in an interview on Tuesday that they want NIMD to stop funding IPOD, and that IPOD should close, referring to it as a mere recruitment tool used by the NRM to fish from the opposition. He said it was the party strategy to call for the withdrawal of support from any organization that works with President Museveni to further his selfish interests rather than the country's agenda.

Currently, IPOD membership comprises NRM, Justice Forum Party (JEEMA), People's Progressive Party (PPP), and the Democratic Party (DP). FDC and Uganda People's Congress (UPC), which were part of the last IPOD whose MoU expired in 2020 are yet to sign the new MoU.
UPC wants updates on the implementation of previous IPOD resolutions while the FDC says it's still consulting with the party. This means FDC, UPC, and NUP which are eligible to join IPOD are not currently nonmembers.

UPC has displayed willingness to sign with the party secretary general Fred Ebil saying, they are part of IPOD. UPC also sent a representative during the IPOD council meeting with minister Mao.
NIMD has been supporting IPOD since 2010 with the aim of providing a safe space for inclusive, respectful, and effective dialogue between the Ugandan parties in parliament.

- NO to the tribalistic system,

are all Ugandans need, if there is to be a beginning of political parties representing a people FREE to go for real election!

These fake political opposition parties MUST stop giving powerless tribally divided ruled Ugandans false hope, in the fake country owned by migrant Museven, who by the way, is going no where, unless Ugandans become ONE people & UNITE to block & show him way out!

Why are fake opposition parties still ensuring Museveni's family business that Uganda is, will be, unless Ugandans decide otherwise, in UNITY?
Report to administrator
+3 #3 sula 2022-09-22 17:45
1- Hmm , the irony : the biggest IPOD is the Parliament itself, carefully filled ,highly paid, to hoodwink Ugandans , that there is Parliament and a country - !!!!!!!!

I wouldnt say a word if lightening was to strike that Parliament with ALL members in there.
But congrats to Kyagulanyi & team
Report to administrator
+2 #4 jose 2022-09-23 11:46
Why the fuss the sovereign country Uganda who makes its decisions about oil, why then cry bcoz Netherlands has suspended support to IPOD
Report to administrator