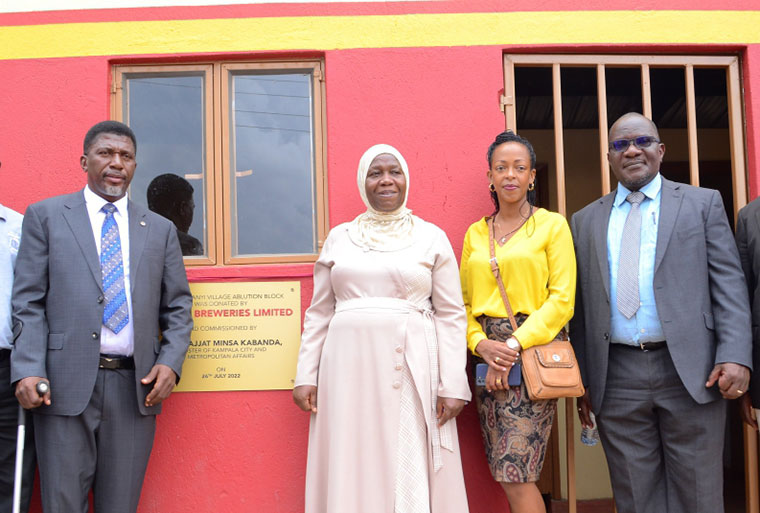 In a bid to improve the sanitation in the area of Luzira area, Uganda Breweries Limited (UBL) has constructed a kitchen facility for traders of Port Bell shopping centre and a modern ablution block for residents of Kamwanyi village. Both are valued at Shs 191m.

The ablution facility that aims at improving access to water and sanitation will be serving approximately 2,000 people in the Kamwanyi community.

It contains toilets with water supply, a hand-washing area, urinal section, seat toilets for disabled per- sons as well as a bathroom that community members will readily access throughout the day. Meanwhile, the kitchen has a capacity of 24 stoves, 24 cabinets and 24 concrete slabs.

Speaking during the commissioning of these facilities at Port Bell, UBL supplies manager, Alfred Balikigira said that after engaging with the leaders in Luzira and the community at large, they established a need to improve access to clean water and sanitation and therefore they decided to fund it.

“I must say that it is always a joy for us as UBL to bring such impact like access to safe and clean water, sanitation and hygiene in the city. These developments are aligned with our “Society 2030” goals which partly is to deliver significantly improved water availability and quality in our communities,” Balikigira said.

The minister for Kampala Minsa Kabanda, who officiated the commissioning, urged traders to take good care of the kitchen and ablution facility they have acquired and also strive to keep it clean.

“People want to eat food that has been cooked in a modern and clean kitchen. It is therefore our responsibility as traders to ensure that we maintain good hygiene in the kitchen as well as the market in general. I also urge the community members that received the ablution facility to maintain good hygiene standards in order to avoid disease outbreaks.”

Kabanda further revealed that they are working towards the improvement of the state of sanitation in Kampala city with the construction of 30 public toilets in different locations across the different divisions of the city already ongoing and expected to be completed by next year.

Nakawa division Mayor Paul Mugambe acknowledged that indeed many areas in Kampala have a problem with sanitation mainly resulting from a lack of toilets and this has not only increased diseases but poverty as well.

“Many of our people are low-income earners and yet they spend much of the little they earn in hospitals treating diseases acquired from poor sanitation. Therefore, such an ablution facility not only improves the sanitation of the areas but also fights poverty because good sanitation reduces hospital visits.”

However, the MP of Nakawa East, Ronald Balimwezo blamed KCCA for not doing its best when it comes to sanitation in the city due to limited access to garbage trucks and yet the city accumulates over 2,500 tonnes of garbage but only less than 40 per cent is collected.