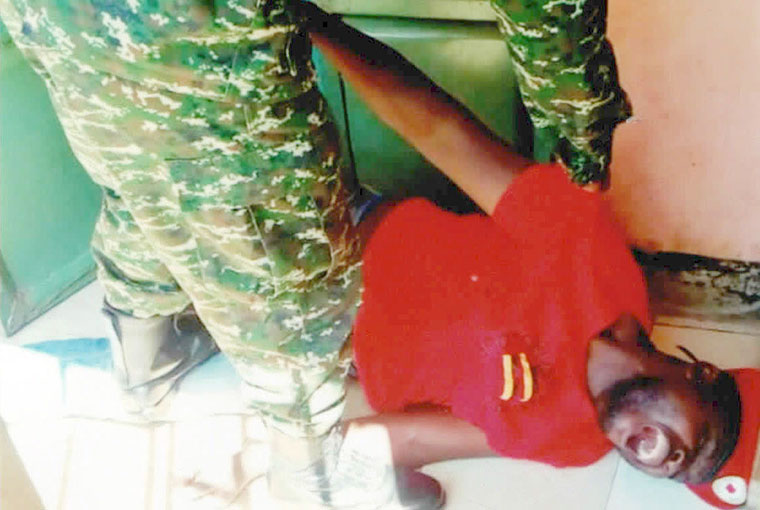 A soldier manhandles an NUP supporter

A section of human rights activists has attacked Mariam Wangadya, the Uganda Human Rights Commission (UHRC) chairperson, for recklessness and complicity in the abuse of human rights.

UHRC is the government body tasked with monitoring and advancing human rights in Uganda. This follows Wangadya’s remarks on August 1 in which she asked for the amendment of torture laws to curb civilian attacks on armed forces.

“I have learnt that our men and women in uniform are inhibited from effectively defending themselves against violent attacks because of laws like the Prevention and Prohibition of Torture Act which provides for individual liability. I think it is time for us to review the efficacy of these laws,” she said during the opening of a four-day training workshop for UPDF senior officers on human rights at Gadaffi barracks in Jinja city.

Wangadya cited the civilian raid on a police post in Pader that left it razed down as well as the killing of a traffic officer by thugs along the Kampala- Gulu highway in Luweero. She went on to praise the UPDF for its high level of discipline. Alex Kiguli, the executive director of Center for Human Rights Protection, said Wangadya’s remarks are unfortunate to assume that civilians purposely attack armed forces.

“Such a statement coming from the human rights ombudsman is regrettable because it puts the lives of civilians at risk,” he said.

“The forces have enough weapons to defend themselves and don’t need any more legislative protection from the people they torture on a daily basis.”

Wangadya also recently came under fire for claiming that torture victims exaggerate the extent of their injuries at the hands of the armed forces. It is on this basis that Nakawa West MP Joel Ssenyonyi, also the chairperson of the Committee on Commissions, Statutory Authorities, and State Enterprises (Cosase), called for an overhaul of UHRC.

“It seems they [UHRC] have lost track of their mandate because instead of defending the rights of citizens from torture and brutality at the hands of the armed forces, they are seeking to protect the oppressors,” he said.

“Many of our comrades remain in detention on frivolous charges and others are in hiding for fear of being abducted and disappearing. Up to this day, the state claims it is yet to conclude investigations against our MPs Muhammad Ssegirinya and Allan Sewanyana yet they are being charged on trumped-up charges. Also, the whereabouts of some of our coordinators like Andrew Sajjabi are unknown and we lost touch with them.”

He further claimed that the National Unity Platform (NUP) has a list of more than 6,000 supporters who were tortured during last year’s presidential election campaigns. However, Faruk Kirunda, the deputy press secretary of the President, refutes the numbers and has asked the NUP leadership to present the alleged torture victims to UHRC for documentation and investigation.

In April, Human Rights Watch (HRW) CEO Kenneth Roth presented President Museveni with a report on alleged human rights abuse in Uganda and called upon government to close all illegal detention centres in the country on grounds that security officers had allegedly turned these facilities into torture chambers.

“We call on the government to immediately close all so-called safe houses and other unauthorized detention centres. The authorities should immediately release all detainees held in such places of detention or bring them promptly before a court to be charged,” noted HRW in a statement.

In fact, a number of high-profile security officers within the armed forces have been sanctioned by the US in recent years for human rights violations and this includes former Inspector General of Police Kale Kayihura and current Police Joint Chief of Staff, Abel Kandiho.

+1 #1 kabayekka 2022-08-17 03:18
So then what is in the name of the Uganda Peoples Defence force. Other than the constitutional Uganda Army? Exactly what is the difference in terms of people's rights to exist?
Report to administrator