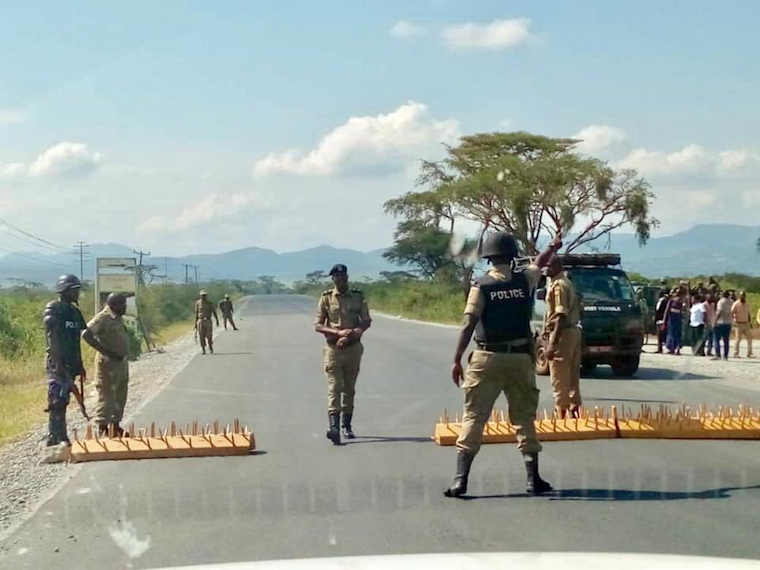 The minister for Internal Affairs Maj Gen Kahinda Otafiire has said that illegal roadblocks mounted by men in uniform are now a bother to the authorities.

Such cases have also been reported along the Kampala-Mityana-Mubende highway where robbers erect roadblocks at Buloba and Myanzi. But the minister says that the government is trying to establish whether these are isolated cases or the work of an organised gang.

“We heard about it. We do not know whether it is just ordinary crime or organised crime or something else. They are snap roadblocks. You can’t stop criminals from coming on the roads for 20 or 30 minutes,” Otafiire said, adding that they are equally bothered that attackers were targeting police officers without a clear motive.

Otafiire added that he has instructed the director of crime intelligence Brig Gen Chris Damulira and CID director Tom Magambo to investigate and provide substantive information about the incident.

He added that, unlike in Luweero where the machete-wielding attackers succeeded in taking two guns and killing one police officer, the officers in Buwama were alert and fired bullets that forced the thugs to flee.

Enanga has identified officers who were attacked and injured in the Buwama incident as constables Lawrence Otim and Paul Nkolo. These are from counterterrorism guarding the Equator at Kayabwe, Buwama town council, Mpigi district.

The war mongering regime likes it to stay that way;just to intimidate and rob poor Ugandans. The corrupt killer regime is scared of it's own shadow. Otafiire is just calling our bluff.
Report to administrator
+6 #2 Lakwena 2022-08-09 07:26
I thought Gen Otafiire was already resting in peace (RIP). Kumbe he has been dozing on the job, hence the banditry on the Highways and Byways.

Ota has also woken up to the fact that some unfortunate Ugandans are being fed to crocodiles in Thailand.

I wonder when Gen J J Odong, the Minister of Foreign Affairs will wake up to the same fact, of Ugandans whose vital organs have been harvested, are being fed to crocodiles in Thailand?

And probably Gen Jim Muhwezi, Minister for Security is also dozing off and/or Day-dreaming about his Vehicle Tracking deal with Russian Mafi coming to fruition. .

In other words, what is it that all Ministries and Departments are being militarized?
Report to administrator
+5 #3 Charles Oruk 2022-08-09 09:51
NRM/A Minister of internal affair should know that, what you do to people will always be done onto you. In 1980s you people did the same when you were fighting the UPC government.

Today, after denying Ugandans the freedom to vote the leader and party they want, the Ugandans you claimed you liberated are now doing the same thing. You people went and robbed a bank in Western Uganda.

Thinking you people were eros but today you are facing the same situation which may escalate to the level that it will become difficult to put down. You people either hand over power to the party that was voted in 2021 or face the faith like the UPC.
Report to administrator
0 #4 Akot 2022-08-09 13:24
Quoting Lysol:

Uganda is always in a state of war, both real and imaginary.

The war mongering regime likes it to stay that way; just to intimidate and rob poor Ugandans. The corrupt killer regime is scared of it's own shadow. Otafiire is just calling our bluff.

From the first day Museveni was given Uganda through UNITY of all the other tribes against T. Okello/Acholi, there were road blocks all over Kampala & his war boys collected money from Uganans, as thank you for handing over the country in peace!

I tokd Musevenis war dosg I didn't have money each time at road blocks, but all looked at me up & down & said "not possible, see the way you dress, it's not possible you don't have money to give us"!

They aren't in danger & won't face any thing as tribally divided ruled Ugandans are powerless without National Leadership, without National Goals & there is no armed band fighting Museveni - every armed dog fights Ugandans!

If the situation escalates, it will still be Ugandans in danger!

Ugandans MUST end Museveni's rule in UNITY or things will get worse as his war dogs are poor & will rob Ugandans at will, while pretending it's not them doing so!

They began robbing, killing...while in the bush, so will continue doing so, unless stopped in UNITY!

Uganda belongs to them!

Going for next fake presidential, parliamentary, local elections will be the final blow to Ugandans as Museveni & his war dogs will be assured of 45 years in power!

Ugandans are afraid to live without Museveni, but they should know that he doesn't need to be elected as he'll rule with or without fake elections!

Why ensure Museveni's lifetime rule when all Ugandans need are;

- NO to the tribalistic system,
- UNITY?

For how much long will Ugandans be a laughing stock, slaves of the migrant who now owns their land & has made them migrants in the zone formed by their tribal lands?
Report to administrator
0 #7 kabayekka 2022-08-09 14:05
It is unfortunate that after 40 years of NRM leadership this country cannot obtain a peaceful transition.

And all of this mess is attributed to personal armies that build themselves up and lord it over the people of this country. One wonders where it all leaves the state of Buganda as a new military upheaval is in the pipe line to remove this dictatorship.

That is why the best civilized advice for the democratic state of the Kingdom of Buganda is to build up its own military force.
Report to administrator
+3 #8 Apuuli 2022-08-09 18:00
My opinion is that, these are stage-managed incidents by state actors/operatives, to justify huge supplementary budgets, from which they will feather their nests.

Or to falsely accuse the opposition of being behind these incidents (Masaka-style), in order to crack down heavily on the opposition. This is a shameless government, whose depravity knows no limits.
Report to administrator