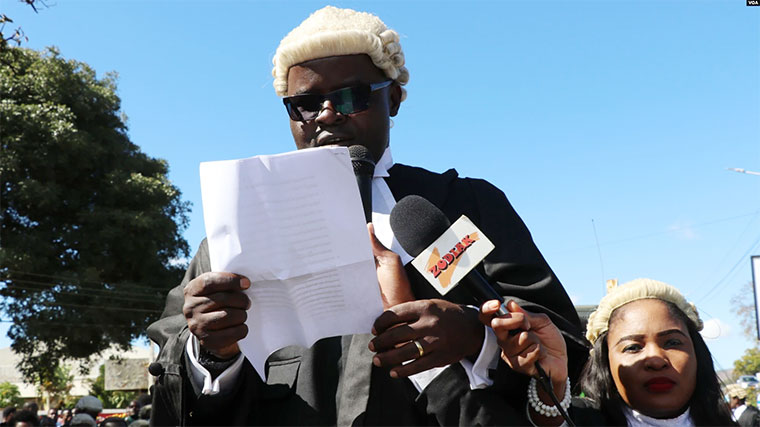 The Anti-Corruption Bureau in Malawi has arrested its former director, Reyneck Matemba, for allegedly taking a bribe for a contract to supply food to the country's police service.

John Suzi-Banda, the former director of Malawi's Public Procurement Agency was also arrested. Both are expected to be officially charged with abuse of power and could face up to 12 years in prison if found guilty.

Anti-Corruption Bureau spokesperson Egrita Ndala said in a statement, Matemba and Suzi-Banda were arrested over the weekend for allegedly receiving kickbacks from a businessman, Zuneth Sattar, to supply 350,000 food ration packs worth $7.8m to the Malawi Police Service.

She says investigations established that Matemba pocketed $10,000 as an advantage for the vetting process of the food rations contract. While Suzi-Banda received MK3,000,000 (U$2,900) from Sattar’s agent Zun Cheena to influence Suzi-Banda to award the Malawi Police Service contract to Sattar’s company without objection.

George Phiri, a political science lecturer based in Mzuzu, north of Malawi, says the arrests confirm how rooted corruption is in Malawi.

“It is important that they have arrested the former chief of the Anti-Corruption Bureau, and this gives a picture of the country. It shows that each and any arm of the government; judiciary, legislature and executive, all these have been found with corruption cases," he said.

“The corrupt practices Act under section 42, requires that for the bureau to prosecute, we need to obtain consent from the DPP [Director of Public Prosecution] and as such we cannot charge the accused person other than we just bring the accused person to court to tell them the reason of their arrest,” he said.

However, Phiri, says this is worrying.

“Because it makes no sense arresting the person in the morning and releasing him by bail in the afternoon. Yes, bail is freedom of a person, but it should not take years before such a person is taken back to court,” he said.

However, ministry of Justice officials say the Malawian government is working to address challenges which contribute to delays in concluding various cases. They cite a recent move by Malawi President Lazarus Chakwera to appoint seven new High court judges to clear the backlog of cases in the courts.

If the culprit persists again and is found guilty of dipping his 9 fingers into this plate of state corruption well two fingers should be cut off to remain with seven fingers on both hands. If these bureaucrats do not understand human rights of others, this time round they will understand its implications on themselves, when tax payers money is stolen anyhow!
Report to administrator
0 #2 kabayekka 2022-08-09 23:00
This is good for the African country of Malawi to publicize its dilemma as that country struggles to develop in these hard global economic times.

This principle of cutting off fingers from corrupt bureaucrats should include those who are discovered handing over bribes to these officials.

And to make it very clear to the corrupt, they should continue to work and pay back their ill gotten wealth using the rest of their fingers. Any African country that neglects to try this very personal punishment does so at its own peril.
Report to administrator