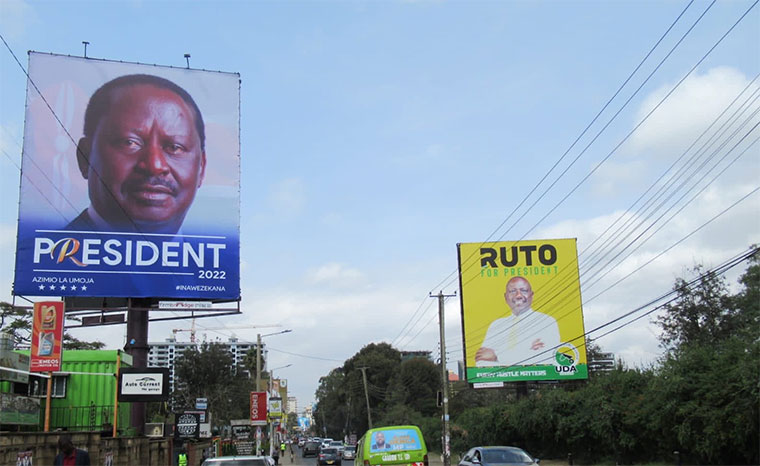 There is a lot of uncertainty over several issues - from who will be president after the polls, how the post-election period will be and how will the next president relate with the neighbouring countries, and others. What's certain, however, is that after the electoral process, Kenya will have a new and fifth president.

While the world is watching how the Kenyan election pans out, perhaps the country with the keenest interest and anxiety regarding the election is Uganda, for several reasons. They two have had the strongest economic relationship in the region, and host the biggest numbers of each other's citizens as settlers, workers and tourists among others.

On the contrary, the mention of "Uganda" evokes controversy in the current campaign and the country's relationship with either of the two leading candidates has become a strong issue in the campaigns that officially closed Saturday.  Yet, Uganda is only the third (or fourth, when DR Congo is included) largest economy in the region behind Kenya and Tanzania. Uganda is Kenya's biggest trading partner with trade volumes of almost Shs 4 trillion; with almost half being Kenyan exports to Uganda.

Uganda also provides a quarter of the business at Kenya's Mombasa port, on top of being the country's biggest source of food imports. Trade hiccups that have seen Kenya block Uganda's exports or impose on them controversial tariffs time and again, have not significantly affected the political and social relations.

Even the sometimes and seemingly tough talk against Kenya and Kenyans by President Yoweri Museveni, which has hardly been replicated by another president in the region, has passed without much diplomatic consequence. In 2009, Museveni attacked the "mad Jaluos" who he accused of damaging the Uganda-Kenya railway in Nairobi and Western Kenya.

Defending his remark at a briefing of Kenya journalists at State House Entebbe, Museveni said that he was not referring to the tribe, but the group of people who damaged the railway, saying they were Luos. At one incident, the rioters chanted "No Raila, no railway," expressing their views that Uganda could have had a hand in the electoral process and subsquent rigging, which led to Odinga's loss.

Another attack on the railway was caused by Museveni's insistence that the famed pitch-sized Migingo island was in Uganda and not Kenya. At another event in Kenya, Museveni warned Kenyans to "stop stealing my cows", in reference to cattle rustlers from Kenya.

Despite all these, however, Kenyan leaders have maintained a good public image of Museveni, apart from when politicians in the western part of Kenya like former minister James Orengo who called Ugandans hyenas in retaliation to Museveni's "Jaluo" remarks, and refused to apologise.

Western Kenya politicians also accused Uganda of sending troops to Kenya to contain the riots at the invitation of President Mwai Kibaki, which riots led to the death of an estimated 1,300 people killed by both tribal attacks and the military.Uganda has consistently denied involvement in any form in Kenya's elections.

The 2008-2000 jibes were soon forgotten, or at least apparently, and Kenyan and Ugandan leaders continued exchanging friendly visits. Since then, the leading candidates in the elections have resumed frequent visits to Uganda and courtesy calls to Museveni.No country has been equally frequented by the two politicians during their campaigns.

Perhaps there is no straightforward answer as to why Uganda is an essential factor in the politics of Kenya. The country does not command much respect in terms of being a democratic role model as its elections are usually discredited due to the presence of the army and allegations of bribery, torture of opponents, and rigging, among others.Last week, US senior envoy Linda Thomas-Greenfield mentioned Uganda as important in the region in the fight against terrorists.

Also, Uganda's president is the most senior in the region in terms of both age and experience as president, factors that may make a new president of another nation associate with him. Ahead of Uganda's 2011 general elections, Odinga was in Uganda to campaign for Museveni, and by the 2013 general elections in Kenya, he had made two more visits which were regarded as seeking his endorsement.

In 2019, he visited State House Entebbe where the two "discussed issues pertaining to boosting agriculture crop production through application of fertilisers from the Tororo phosphate plant," according to a statement issued later. In the same year, Ruto visited the country and, together with Museveni, launched the William Ruto Institute of African Leadership Studies and Makerere University.

As the campaigns for Tuesday polls progressed, Odinga visited Museveni again in May 2022. On the other hand, his rival's planned visits were cut short by the state last August, when he was blocked from boarding a plane to Uganda, on grounds that as deputy president he had to get permission from President Kenyatta first.He later said in a tweet, “I have been stopped from flying to Uganda because the system believes only the children of the rich and famous can fly to foreign countries and dine with presidents. But we have God and we will overcome. I am putting the tribalists and dynasties on notice that our patience has run out and we will not take any more humiliation. Let them face me openly instead of hiding behind their lowly serfs of the civil service."

He had earlier visited the country in July to launch a vaccination production project with Museveni. In 2015, he joined Museveni's campaigns in eastern Uganda for the 2016 election and was in the country in 2018 for the launch of the Kapchorwa-Suam road.

The Uganda factor has been used to de-campaign Dr Ruto's bid more than any other candidate's. The Azimio la Umoja alliance of Odinga has used his visits to Uganda to discredit him, by alleging that he is promoting investments in Uganda instead of Kenya, including previously travelling to the country with a controversial Turkish investor.

Social media is awash with posts relating Ruto with Uganda and Museveni, to the effect that his visits are aimed at getting help to rig the election, in reference to Ugandan polls that are usually declared rigged by different people and organisations. The fact that there is no incumbent in the elections makes it easier for Uganda to take a position.

Government spokesperson Ofwono Opondo said Uganda will welcome whoever is declared the winner.Odinga also joined the fray recently by listing Uganda, Somalia, Sudan…among the "worst countries in the world" with which Kenya should not be compared.

It is hoped that these statements and actions by the Kenyan leaders will not go beyond the elections and affect the relationships between the new leadership and the neighbouring countries, as well as have an impact on the East African Community integration.

+7 #1 Henry Baisi 2022-08-08 11:20
The Kenyans have conducted a peaceful free and fair election campaign. Not a single person has been killed or intimidated.

Kenyatta is leaving office peacefully. He has backed his opponent Odinga in a strong gesture of national reconciliation. Kenya's GDP is US$107 billion. Their population is 56.2m. Uganda's GDP is US$34billion, population is 48.5m. Kenya is miles ahead!
Report to administrator