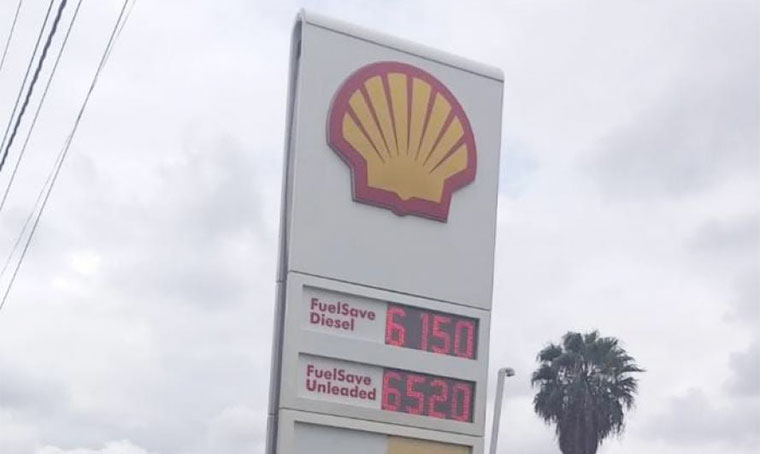 Fuel prices in Uganda, particularly in Kampala have continued to rise, but at a slower rate over the last two months, compared to the sharp increases registered between March and early July.

Ordinary motorists in Kampala had predicted that by the start of August, a litre of petrol could be selling at well over Shs 7,000 based on the rate of daily increases then. Between June 20 and July 20, for example, the petrol of fuel had risen from Shs 6,000 to Shs 6,500, but has since then risen by just about Shs 50.

Diesel prices have at some fuel stations slightly dropped back to between Shs 6,000 and Shs 6,150 a litre, a drop of about Shs 100. The common reason analysts are giving, is the fall in crude oil prices over the last two months, from a $120 high to $96 a barrel in western Europe and $90 in the US crude market.

The fall in prices of crude is based more on speculation than demand and supply forces. It started mainly after concerns that the major global economies would slow down, and some, including the US, were likely to go into a recession, dampening the global economic mood.

Trouble for the US economy started over the continued uncertainty of the Covid-19 pandemic, which, as it was easing, was followed by the Russian invasion of Ukraine. The resultant sharp increase in fuel price increases led to sharp inflation across the world as prices for almost all basic commodities hit an all-time high.

Over the last two quarters, between January 1 and June 30, the economy contracted 1.6 per cent and 0.9 per cent consecutively, though the president refuses to admit recession because 400,000 jobs have been created per month, according to him. This situation has since scared the oil industry into cutting prices of crude, which has in turn led to a fall in pump prices in some countries.

Why are prices in Uganda so high then?

Two weeks ago, Ramathan Ggoobi, the permanent secretary at the ministry of Finance forecasted that fuel prices were peaking in a few days following the trend of the crude market prices. He added that hopefully, they would start dropping, although this would depend on whether there were any new disruptions in the supply chain.

The constant price hikes in the country saw the motorised traffic volume on Kampala’s streets fall significantly, with many vehicle owners saying they could no longer afford to drive every day. So, since June, the future price for crude (the price announced at which crude will sell in about a month’s time) has dropped almost 20 per cent, but locally the pump prices, especially for petrol, have been rising though at a slower rate recently.

Experts say the prices will take a little longer to fall noticeably, compared to the rate of the fall in the price of crude, because of the complex supply chain. Ordinarily, a change in the crude price would be reflected after not less than two months, and for countries like Uganda which are more remote from the international market, it can take up to three months, according to Ayebare Tom Rukundo, the manager of economic and financial analysis at the Petroleum Authority of Uganda (PAU).

Rukundo explains that prices of crude on the international market are announced about a month before the crude goes on sale, although some are sold on a daily basis. The crude is then delivered to refiners who then transform it into refined products, ready for shipping to the international market for sale to different countries, a process that can take another two months.

Therefore, while crude prices have dropped by almost 20 per cent to $96, in East Africa, and Uganda in particular, consumers are still buying the crude that was sold between $110 and $120 per barrel.

According to the oil industry statistics, depending on the tax regimes along the value chain, fuel duty accounts for about 30 per cent of the cost of the refined product, while VAT takes about 18 per cent.

For example, according to a BBC survey, European refiners are currently charging $43 and 11 cents per barrel (159 litres) up from just $9.3 in June 2021 to refine petrol, while diesel costs even more ($51) to refine.

This means that most of the increase that the final consumer in Kampala is experiencing is caused by the refiners. In recent months, the cost of transportation has also risen sharply due to the cost of fuel and other overheads, which were made worse when the transport system in eastern Europe was disrupted by the war in Ukraine.

Under normal circumstances, transporting a litre of fuel from Mombasa to Kampala costs between Shs 350 and Shs 500 according to Rev Frank Tukwasibwe, the head of the petroleum supply department at the ministry of Energy.

This, however, can also be influenced by other factors like non-tariff barriers or delays, as well as the tension transporters feel operating through Kenya due to the elections. If there are no new challenges in the global supply chain, the prices are expected to stabilize and start falling gradually, though they might not return to the 2021 levels, according to experts.

However, it will also depend on how weather patterns turn out to be as it will soon be winter in Europe. During that period, there is more demand for gas in the affected countries, and this could increase pressure on global prices, according to economist Dr Fred Muhumuza.

“Winter is coming to the northern hemisphere so prices of gases and oil will increase even more and Uganda has no control, you need to adapt (to the possible worsening of the situation)," he said.

+3 #1 Jose 2022-08-06 03:00
There's nothing to be happy about
The rise in fuel prices is govt intended,
It's the out cry of the public that has kept the fuel there, esp when even lowly recognized citizens started comparing Uganda with the other countries in east Africa n what the govts have done to curb the problem

By the don't ignore the call by besigye,
Leave mao who chose to take up a govt ministerial place claiming he is going to help this country
In fact it's a statement that he wanted to pick his reward for betraying the opposition
In fortunately the government or it's agents are the very oils companies dealers
Report to administrator
0 #2 Akot 2022-08-07 19:33
Jose, agreed, but,

Museveni is assured of lifetime rule;

- those already with him will just enjoy living,

- those who can will join him, while,

- those without education nor income, will die of
poverty, unnoticed!

If there is to be opposition, it can only be ONE BODY, that MUST call for an end to the tribalsitic system, then to UNITY of Ugandans!

Did T. Okello/Acholi hold on when all the other tribes UNITED for Museveni?

Who will help Museveni kill UNITED Ugandans, to ensure he remain owner of Uganda?

There MUST BE REAL Opposition to call for an end to the tribalistic system & this comes FIRST, then to UNITY, if Museveni is to be stopped!

Not even DR Besigye who knows his former friend/patient Museveni so well understands that unless Ugandans say NO to the tribalisticf system Museveni so cleaverly put in place & UNITE, there is no way the demon will be gor rid of!
Report to administrator