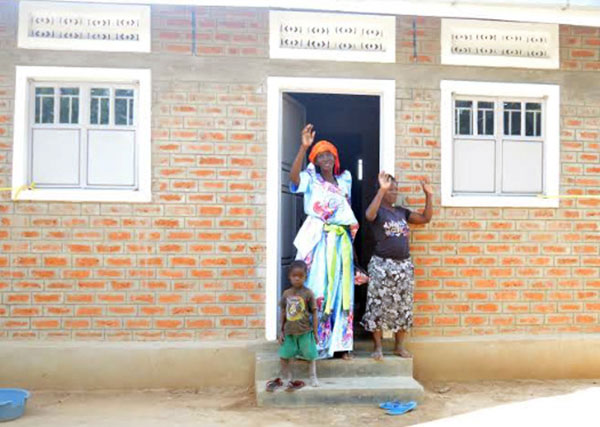 Ann Grace Apio, a beneficiary from Kumi, at her house

Ann Grace Apio is a 64-year-old farmer, from Kadami sub-county in Alukat village in Kumi district.

She wondered how she could survive after her husband committed suicide, leaving her with five children and an orphaned grandchild to fend for. With a house about to fall on her, she always had constant thoughts about doing exactly what her husband had done — commit suicide.

Then as fate would have it, she was approached by people who promised to at least build for her a house and enroll one of her sons into carpentry. She couldn’t believe it.

“It sounded too good to be true,” she recalls with a broad smile. “Although I believe in God, it only really sunk in when construction started,” she adds.

Apio is one of the beneficiaries who over the weekend received 60 new houses from Habitat for Humanity in Kumi and Mayuge districts in their efforts to provide decent living and fight household poverty in the communities. Each house comes with a pit latrine and a 3,000-litre water tank for rainfall harvesting.

“Decent housing is the cornerstone and a foundational key to other human rights such as access to clean and safe water, hygiene and sanitation among others,” says Robert Otim, the national director Habitat Uganda.

“A decent home provides good health and all these families that lacked adequate sanitation facilities and access to clean and safe water in their homes will now live better lives,” explains Norah Matovu Muwanga, the organisation’s board chair.

Each beneficiary also had a member of each beneficiary household empowered with different vocational skills and start up kits, so that they can earn a living and be able to provide support to their families.

Since its establishment in Uganda in 1982, Habitat for Humanity have built, improved and rehabilitated over 40,000 houses thereby transforming lives of over 240,000 vulnerable families in Uganda and contributing to a 1.67% reduction in the housing.