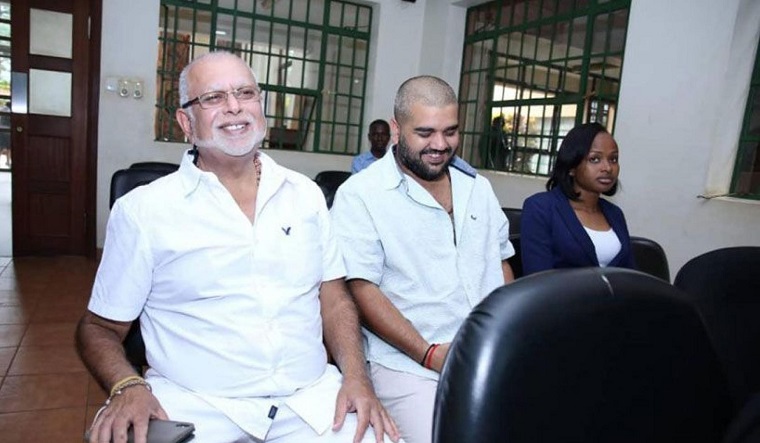 Sudhir Ruparelia (L) with his son Ranjiv in court

Ugandan businessman Sudhir Ruparelia has obtained a final Supreme court order allowing him to revert Crane bank back to its shareholders. In January 2017, Crane bank was acquired by dfcu bank at Shs 200 billion after the central bank ruled that it was undercapitalized.

The decision made on Friday by justice Prof Lillian Tibatemwa Ekirikubinza follows a disagreement that has been ongoing for over six months between the Bank of Uganda and Sudhir on whether the final order needs to be enforced should also reflect that the bank is reverted to the businessman.

This decision arises from an appeal filed by Crane bank in receivership (Bank of Uganda) on August 1, 2020, challenging the decision by the Court of Appeal to dismiss the case in which they accused Sudhir and his company Meera Investments Limited of withdrawing Shs 397 billion from Crane bank via fraudulent transactions.

It all started on June 30, 2017, when Crane bank in receivership/Bank of Uganda sued Sudhir and his company Meera before the commercial division of the High court seeking to recover the said monies that had reportedly been siphoned by Sudhir.

They also sought to recover freehold certificates of title to 48 properties - together with duly executed transfer agreements and a refund of the monies for which they claimed were for invalid leases. However, in 2019, the then Commercial court judge David Wangutusi dismissed the case with costs on grounds that the Crane bank in receivership had no capacity to commence legal proceedings against Sudhir.

Not happy with the decision of Wangutusi, Crane Bank under receivership challenged Wangutusi's decision in the Court of Appeal claiming that the judge erred in law by holding that the bank had ceased to own property and its liabilities, and assets had all been exhausted.
The appeal by the BOU was however dismissed with costs leading to an appeal in the Supreme court. BOU on August 1, 2020, however, withdrew the appeal before it could be heard. But Sudhir, together with his company Meera, objected to the withdrawal, saying that they should be awarded costs.

The Supreme court agreed with Sudhir and directed BOU to pay costs in its February 11, 2022 decision. The Supreme court also ruled that receivership of Crane Bank Limited ended on January 20, 2018, and from that date, the management and control of Crane bank returned to its shareholders.

But when Sudhir and his company, who were the successful party, prepared a decree to be approved by the court for enforcement, BOU objected to the format of what the third order should state.

It agreed with the rest of the orders that the appeal be dismissed with costs to be paid by BOU and that the dismissal is with effect from February 11, 2022. But it was not content with reverting the management of Crane bank to shareholders.

BOU argued that the Supreme court had no jurisdiction to make an order reverting the management to the shareholders because when they withdrew their case, the contention was on who should pay costs and that the Court of Appeal had not ordered that it should be reverted.

In her decision on Friday, Tibatemwa indicated that under the Financial Intelligence Act, after the expiration of 12 months from the date of takeover by the receiver, the receivership must be deemed to have lapsed by operation of the law.

"It is a position at common law that where a legal relationship is terminated by effluxion of time then the rights accruing revert back to the owner," said Tibatemwa.

She added that Crane bank existed as a legal entity before it was licensed to operate as a financial institution and that the return of management to the shareholders is a logical result of the fact that the central bank is no longer a receiver and no longer the manager.

As such, the court has emphasized that the Crane bank receivership ended on January 20, 2018, and consequently, its management has to be reverted to its shareholders. Sudhir’s lawyer Peter Kabatsi has welcomed the decision saying it has been a tough fight.

+3 #1 Uncle Philo 2022-07-02 21:44
In the common man's language: The gov't through relatives and friends of bush war heroes at BOU tried to swallow Crane bank but Sudhir was smart. So the common man is going to pay for the mistakes of the NRM stooges...

Then the previously closed banks like Greenland, Teefe, etc also have a basis to resurrect their cases... Then the common man will pay for the mistakes of the Junta croonies again... I think the god's must be angry with us.
Report to administrator
+2 #2 Lakwena 2022-07-04 08:42
Quoting Uncle Philo:

In the common man's language: The gov't through relatives and friends of bush war heroes at BOU tried to swallow Crane bank but Sudhir was smart. So the common man is going to pay for the mistakes of the NRM stooges...

Then the previously closed banks like Greenland, Teefe, etc also have a basis to resurrect their cases... Then the common man will pay for the mistakes of the Junta croonies again... I think the god's must be angry with us.

Uncle Philo, this is the curse of being under the iron grip of a government of wrongdoers by wrong doers and for wrongdoers.

In other words, a state captured by wrongdoers and moreover Sudhir is our Gupta of South Africa.
Report to administrator
+1 #3 tumurebe 2022-07-04 10:06
Dr. Besigye has and is calling on Ugandans to "wake up" but it seems we are comfortable in our "sleep".

While sleep is good for our health, it will continue to cost us in this and many other ways. PDM is another dose for slumber for the extremely poor (1 Million UGX promise to a poor person gives them a million reasons not to wake up)
Report to administrator
0 #4 WADADA rogers 2022-07-04 13:14
And who bears the burden of the outcome of this decision, the tax payer and not the Bagyenda's of this world with the late drunkard Tumissime Mutebile.

If we had good leaders in place, an order would be made to attach private property of the officers who closed crane bank
Report to administrator