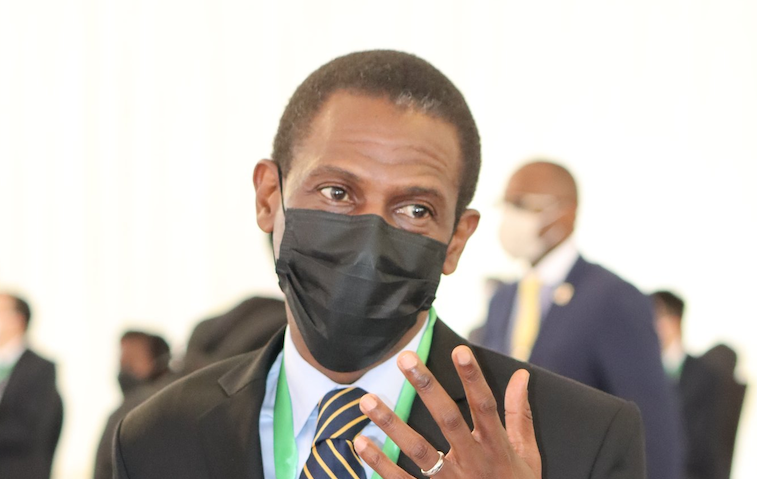 Attorney General Kiryowa Kiwanuka has asked the High court to dismiss with costs, an application by two lawyers challenging the agreement the controversial coffee deal between the government of Uganda and Uganda Vinci Coffee Company Limited.

Henry Byansi and Micheal Aboneka petitioned the High court in April this year challenging the agreement signed by Ramathan Ggoobi, the secretary to the treasury on behalf of the government, and Enrica Pinetti, the board chairperson of Uganda Vinci Coffee Company Limited board on February 10, 2022, to process and export Uganda's coffee on grounds that it is illegal and irrational.

The lawyers asked the High court to declare the actions of the minister of Finance and Economic Development to handpick Vinci to solely manage the coffee business, set coffee prices and related products in disregard of able Ugandan firms, is an infringement on the right to own property and open competition as well as economic rights of coffee farmers in the country.

The agreement grants Vinci exclusive rights to buy Uganda’s coffee before the government can look at other players. The agreement also exempts the company from import duty tax, stamp duty, value-added tax, National Social Security Fund, and pay as you earn for ten years. The company also reserves the right to determine the coffee prices in the country on top of enjoying electricity subsidies and other benefits.

Kiryowa intends to rely on evidence contained in an affidavit by the acting director of economic affairs in the ministry of Finance, Moses Kaggwa in his defense. In his affidavit, Kaggwa states that the agreement does not give Vinci any authority to manage production, export, and set prices of coffee beans and its related products.

He contends that all the required legal, administrative, and consultative processes were adhered to and the execution of the agreement by the government was informed by the overall government policy to invest in value addition and specifically agro-processing in line with the National Coffee Policy and National Coffee Act of 2021.

“...I have been informed by my lawyers in the attorney general's chambers that legal due diligence was conducted prior to clearance of the deed and it was determined that the company was validly existing, incorporated under the laws of Uganda, had its returns up to date and the parties to the agreement were authorized and had the capacity to execute the agreement on behalf of the parties," reads Kaggwa’s affidavit in part.

It adds that "...the ministry of Finance Planning and Economic Development carried out consultations with officials of Uganda Coffee Development Authority whose mandate is to promote good practices in all the value chains of the coffee industry."

According to Kaggwa, Vinci obtained an investment license from the Uganda Investment Authority, and was granted a lease for land at plot 738 for 49 years to establish a coffee processing facility, adding that it qualifies to be given incentives by the government within the terms stipulated under the investment Code Act of 2019.

Kaggwa further adds that the government undertook to give priority supply of coffee to Vinci in order to ensure the sustainability of its operations, adding that there is no contractual or legal obligation for any coffee farmer to sell his or her coffee to Vinci company. The case is fixed for hearing on August 18, 2022, before civil division judge, Emmanuel Baguma.

Last month, the sectoral committee on trade, tourism, and industry in parliament unanimously called for the termination of the agreement on grounds that it contravened the constitution and other tax laws. Aboneka and Byansi have since submitted the decision of parliament to the court for review and quashing the coffee agreement.

Haaaaha God , obusajja butujooze, kale bujooze Uganda.
Report to administrator
+4 #2 Odongkara Bidong 2022-06-29 13:21
The AG should read this if he is a Christian “Be alert, stand firm in the faith, act like a man, be strong.

1 Cor16:13” But the core virtue of a coward is niceness. ”You must lick the boot that kicks you”.
Report to administrator
+3 #3 Lakwena 2022-06-29 16:00
Because they have positively identify with false, ugly wrongdoers, and therefore socially, economically and politically insecure; the Kiryowa Kiwanuka of this country are opportunistically, pre-occupied with feather their nests at the expense of the future of the rest of Ugandans.

In other words e.g., they are so selfish so that zealously and unpatriotically, draft agreements and/or MOU that contain Satanic Sections, which when the Agreement/MOU is cancelled, the government loses the case in the courts of law, and a result; the taxpayers lose their shirts and skirts.
Report to administrator
+3 #4 Lakwena 2022-06-29 16:13
Quoting sula:

1- I feel ( correctly or wrongly ) After destroying the Coffee Markerting Board , museveni &family now feel they have enough money to become a coffee Marketing board - hence make a lot of money !!!

Sula one of the neighbors of the Bugolobi Coffee Marketing Board Processing Plant told me that: in the name of Allah, all the CMB machinery (Modern German Made) were cannibalized and taken to Rwanda.

And think of it, how they literally destroyed the cash economy of other agriculturally productive Regions of this country by destroying all the Cooperatives.Unions.

In other words, everything these people are doing is Concealed Sabotage!
Report to administrator
+2 #5 Munafu Mali 2022-06-29 20:33
Woooweeee! Poor country!!! Let this Pinetti go and invest in, for example, Britain or the US.!!

Those two civilized countries can do a thorough clear-headed background check on this woman to determine the nature of " investor " she is, Only then can Mr Kiwanuka know what he is "defending"...
Report to administrator
+3 #6 Zaitun 2022-06-30 16:35
"Sula one of the neighbors of the Bugolobi Coffee Marketing Board Processing Plant told me that: in the name of Allah, all the CMB machinery (Modern German Made) were cannibalized and taken to Rwanda.......

In other words, everything these people are doing is Concealed Sabotage!
Dear friends, is it onty today that you are realising that these thieves stole everything belonging to CMB and took them to Rwanda?

What happened to the Telecommunication system that was bought from Germany but installed in Telephone House? Was it not removed and taken to their home country Rwanda?

When people talk of modern Rwanda, never forget that your Museveni looted every thing in Uganda but only to be installed in Rwanda.

If today we hear of Rwanda engaging in war in Congo, it is not for nothing!!!!
If we continue sleeping like mice, we shall wake up to see that not only do we own nothing, but everything has been looted!
Report to administrator
+2 #7 sula 2022-07-01 13:15
Zaitun , our children and grandchildren are being told that Rwanda is more advanced than Uganda.

That aside ,if you can take a head count in Luwero Nakaseke today you might get a shock to know who are the landlords in those areas.

The speed at which foreigners are buying off Buganda and soon Uganda, soon our children and grandchildren will have no where to stay.
Report to administrator
+1 #8 sula 2022-07-01 13:21
Zaitun, you cannot even imagine how busy Coffee Markerting Board -Bugolobi was !!!!,They were trucks and trucks lining up from morning ,lots of jobs there, permanent and casual , it was a mini town of its own.

Unless one is a foreigner and a sadist, you could tamper with it. It is only Allah who can decide what to do with museveni &co for the total destruction of the future of our children, grandchildren.
Report to administrator
0 #9 rubangakene 2022-07-01 17:56
Does the Atorney General really not understand the meaning of 'general' as in Attorney General? It means protecting the nterest of the majority of the citizens of this country, not the few!

He has not enumerated reasons in favour of the "Pinetti deal". As for Museveni, I wonder what he has against Cooperative entities; understand he was once a "lecturer" in Moshi Cooperative College in Tanzania with Aliiro Omaara and Makmot. My advice is, listen tothe voices of the masses in this case!
Report to administrator