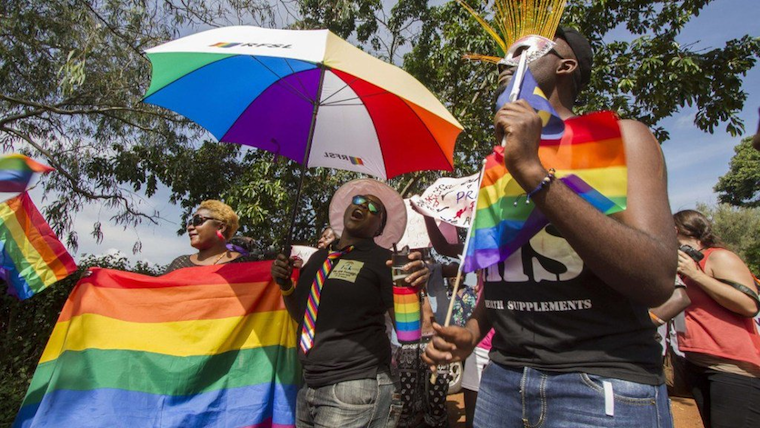 Rights activists in Ghana are protesting after a crowd, urged on by a member of parliament, tore down a billboard that promoted tolerance toward the LGBTQ community. Last year, Ghanaian security shut down a European Union-supported LGBTQ community center, and some lawmakers are seeking to make gay rights advocacy illegal.

To mark Pride month, LGBTQ+ activists mounted billboards in the capital Accra and two other cities with the inscription "Love, Tolerance and Acceptance."

However, the giant posters, positioned to catch the attention of commuters, sparked public uproar, prompting conservative MPs to call for their destruction. Ibrahim Murtala Muhammed, an opposition MP representing the Muslim-dominated constituency of Tamale, said he would not entertain activities of the LGBTQ+ community in his jurisdiction.

"They deliberately attempted to cause pain within Muslims in the northern region and that is why they placed it here," Muhammed said. "We would not allow this to happen within our jurisdiction. So we called the youth, we came together and pulled it down and burned it … any material that is pasted on any billboard within my jurisdiction and it's from those people, we'll pull it down and burn it. That particular act is not even accepted in Ghana law, so if anybody comes and goes contrary to Ghana law, we'll teach the person a lesson."

Sam George, another MP, is one of the sponsors of a proposed law seeking to criminalize LGBTQ+ advocacy and impose longer jail terms for same-sex relations. George led a coalition last week to mount pressure on the police to tear down the billboard in Accra. That billboard was removed last Sunday.

George hailed Wednesday's act led by his colleague MP by tweeting: "So long as they mount those billboards, we would bring them down."

LGBT+ Rights Ghana, the organization that sponsored the billboards, condemned the attacks, saying they put the lives of LGBTQ+ community members in danger.

"The tearing down of the billboards goes further to affirm the violence that is being meted towards us as LGBTQ Ghanaians with impunity from state and non-state actors," said Alex Kofi Donkor, director of LGBT+ Rights Ghana.

"It is very scary for us as a community and even a democratic country that has a constitution that is supposed to protect all citizens and give right to freedom of life, of expression and of dignity."

Donkor served notice that LGBT+ Rights Ghana will seek redress in court while giving assurance to the community to remain calm.

"We plan on taking legal actions against the tearing down of the billboards. If you remember last year, our office space was raided and now it's the billboard and the introduction of a bill," he said.

"To what extent do these people really want to go to incredibly undermine our lives as LGBTQ Ghanaians? We want to now pursue legal actions against this impunity that is on the rise and continuously increase and being meted out or targeted towards LGBTQ persons in Ghana."

The fight for gay rights in Ghana will be an uphill battle as the West African country's parliament considers a law that will prosecute LGBTQ+ advocates. President Nana Akufo-Addo has also condemned same-sex marriage.

When , for example , you say that "everyone should accept everyone for being themselves" homosexual opposers ( you call them bigots or homophobics) will challenge you to accept them as they are.

You simply cannot fight tolerance by being intolerant towards those with a different view.
Report to administrator
0 #4 Wooden K 2022-06-20 18:09
Some of might also wonder which people are acting "because of ignorence " ?

It seems to me that this Gay Machine is still very ignorant about the realities in the rest of the World.
Report to administrator