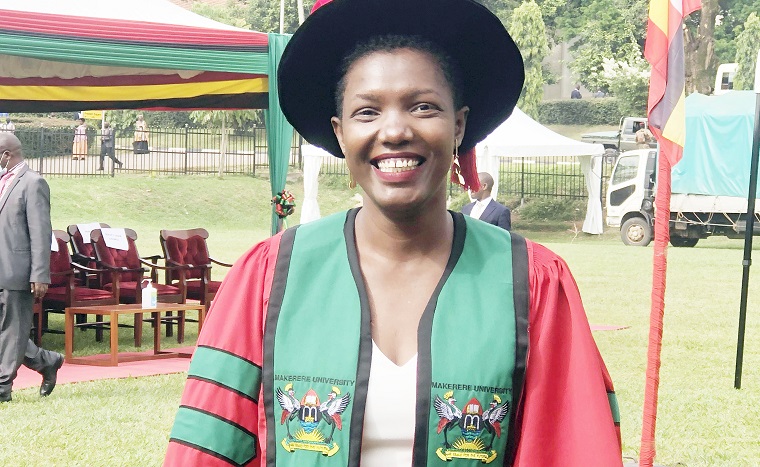 Dr Caroline Adoch is an affable character full of humour and with an infectious smile. But privately, she is a go-getter with no room for mediocrity. Last week, she became the first woman to be awarded a doctor of Laws (LL.D) from Makerere University.

As David Lumu writes, her research about victims of rape is a stark reminder of the need to overhaul the criminal justice system.

Also a lecturer at Makerere University School of Law, the 40-year-old renowned for being a no-nonsense lecturer who does not tolerate flimsy excuses from students. She believes studying law is a commitment to transform society, not a mere avenue for getting gainful employment.

It is on that background that she pushes herself and her students to appreciate how law can have a positive influence on society. Also a renowned feminist, Dr Adoch applied a feminism methodology for her doctoral thesis titled: Access to Gender Justice in Uganda: A Feminist Analysis of Experiences of Rape victims in the Reporting and Prosecution processes.

The thesis centred around how victims of rape experience the criminal justice system as they report and prosecute cases as well as the impact this had on their access to justice.

“As a lawyer, I was often asked questions on all and any issues; by neighbours, family and any random person who knows you are a lawyer. I have been asked too many questions about rape and I often did not have satisfactory clear cut answers,” she recalls.

It is from this prompting that Dr Adoch set out to research on the rape victims. And, her findings expose a real threat to society than what many know.

“Rape is much more common than we can ever imagine. During the course of the research, every woman that I interacted with during the focus group discussions knows someone who has been a victim of rape,” she says.

She recommends recourse to restorative justice which will guarantee comprehensive justice and accountability for rape survivors.

In this context, restorative justice allows victims to have their ordeal heard, and is an opportunity for the offender to be accountable for their actions. Dr Adoch advocates for this system basing on estimates by the Uganda Bureau of Statistics (Ubos), that show that more than one million females, which comprise of 13 per cent of women aged between 15 and 49, experience sexual violence each year.

Also, the recent Uganda police annual crime reports shows that about 50,000 cases are reported each year.

“That means that cases are unreported or settled by mechanisms outside the criminal justice system.  Of the cases that are reported, only one per cent end in convictions. The process of reporting and prosecuting a case is costly; and it is extremely painful and it is so traumatic for women that it has been equated to going through a second rape,” she reasons.

“Even where there is a conviction, the sentences given by the court are lenient. Sending a rapist to prison for three to seven years is not “justice” for a woman whose life has been torn apart by an act of sexual violence.”

In fact, her research established that many women who have gone through the system would not report a case of rape again.

“Rape is a crime of violence against the victim. The victim should have a voice in defining what constitutes ‘justice’ for the violation she has suffered is.”

It remains to be seen whether findings from her research will be embraced, especially policymakers, in order to improve the plight of rape victims. To this, Dr Adoch advises that there is need to revisit our law on rape and how cases of rape are handled right from the time a case is reported through to its disposal.

“The aim of our criminal justice system is to punish perpetrators and deter crime. When it comes to rape; we are doing neither. There are currently scattered efforts to address some of the issues; the Sexual Offences Bill, which has gone silent, expands the definition of rape,” she says.

“The DPP has adopted victim empowerment and witness protection guidelines but there is no law for victim and witness protection, and the judiciary has over the last few years held special Sexual and gender-based violence (SGBV) sessions to dispose of the backlog of sexual violence related cases.  The problem is that for the reforms to be meaningful, it has to be concerted all through the criminal justice system.”

She further reasons that even then those reforms can only improve cases disposal and conviction rates but do not address the matter of majority of cases that go unreported. What stands out in her research is that it brings out her heart, desire and character to protect the girl child. In fact, she has a message for aspiring young lawyers and women who look up to her for inspiration.

“Whatever it is you want to do; start. It is not a cliché. The most difficult part of doing is to start! …and be kind to yourself,” she says.