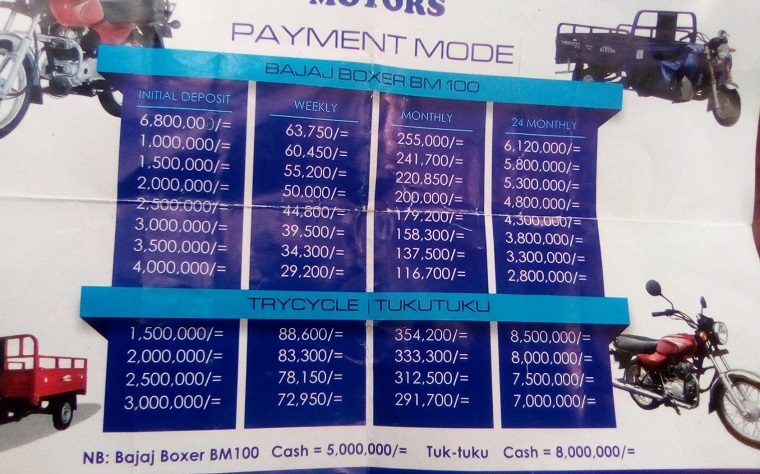 Over 100 people in Arua city, West Nile sub region in northern are in still in shock after officials of Sky Motors Limited, the company they deposited money with to secure motorcycles on loans unceremoniously disappeared and switched off their phone lines.

According to the company guidelines, each interested rider was expected to make an initial deposit of between Shs 680,000 and Shs 4,000,000 out of the required Shs 6.8 million to access a motorcycle and Shs 10 million for the tricycle (tuk-tuk).

Potential clients were then expected to make either a weekly or monthly payment for a motorcycle or tricycle while those who could afford would pay cash. The company had promised to deliver motorcycles and tricycles for the applicants on Sunday afternoon during a "mega launch".

However, on Saturday, some of the affected clients who had come to clear their outstanding balances ahead of the launch were shocked when they arrived at the company’s office and found no officials in office.

After waiting in vain for the officials to arrive, the affected clients rushed to the nearby Manibe police station to report the matter but were later referred to Arua central police station.

Stephen Droma, one of the affected boda boda riders says that he paid Shs 1.36 million for two motorcycles and the company promised to deliver his motorcycles during the launch which never materialized.

Meanwhile, Flavia Adiru, a single mother from Katrini sub county in Terego district who lost Shs 2 million wants the city authorities to intervene noting that many of the affected clients borrowed money from SACCOs to secure the motorcycles.

Elmahad Salim, the chairperson of Arua city Boda Boda Association, told URN that he has received a list of at least 80 of his members who made partial payments to Sky Motors Company Ltd. He however faults Ayivu division authorities for issuing a trading license to company without due diligence.

Alice Akello, the Arua resident city commissioner says that the company officials had been moving on different radio stations in Arua city popularizing their business as genuine. Akello however cautioned the residents to be extra vigilant in dealing with companies whose registration status is not known.

This is not the first time residents in the sub region have been conned by fake motorcycle companies who purport to offer motorcycle loans. In 2019, hundreds of businessmen, teachers, and boda boda cyclists in West Nile and Acholi sub regions were fleeced by Easy Boda-Boda Company Ltd in yet another motorcycle loan scam.

+2 #1 WADADA rogers 2022-05-18 11:52
Every year, Ugandans loose money to such scams, i recall the same thing happening in Iganga, Mbale, Soroti, Tororo and so many other areas but for some reason, they never run out of 'customers" to cheat and guess what, the police never intercept these thugs before they ran away meaning they always work with the police
Report to administrator
0 #2 Jama 2022-05-18 15:53
In a regime of mafia expect mafia related activities to flourish.
Report to administrator
0 #3 kabayekka 2022-05-19 12:53
Of course the political police is busy buying off politicians in Kasangati or trying to control them.

They cannot have the capacity to catch and arrest such determined criminal who are well protected investors!
Report to administrator