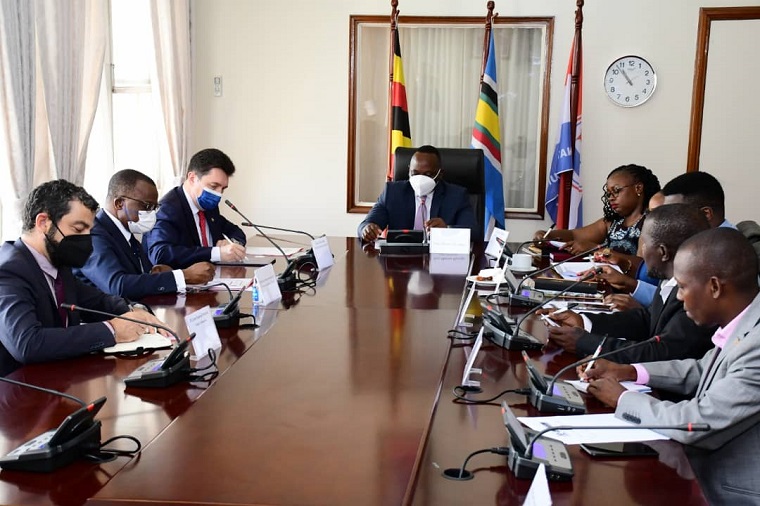 France is not blind to ongoing human rights abuses in Uganda, French Ambassador to Uganda, Jules-Armand Aniambossou has told opposition MPs. He disclosed this while meeting the Leader of Opposition (LoP), Mathias Mpuuga and a section of opposition legislators at parliament on Monday.

He was accompanied by his deputy, Jean Francois Hasperue and Olivier Cadic, a senator and chairperson of the French parliament committee on foreign affairs. During the meeting, Mpuuga and the opposition legislators questioned the ambassador on France's position in regards to human rights and democracy in Uganda. The French embassy in Kampala sought the meeting that Cadic said was intended to promote economic diplomacy between France and Uganda.

He added that the opposition was keen to pick views from the French ambassador about the issue and other areas. Asuman Basalirwa, the Bugiri Municipality MP pointed out the French military cooperation with the Uganda People’s Defence Forces (UPDF) questioning whether it is a concern to France that the army is often cited in cases of human rights abuse.

"You say you have military cooperation with the UPDF, does it concern you that the UPDF is one of the greatest violators of human rights in this country but also its record where it is engaged in 'peace' keeping missions there are human rights violations and we have a military cooperation. It is you training them, what are these skills that you're giving them that they end up torturing the citizens they are supposed to offer protection. Are there components of human rights in the curriculum that you give these people?" said Basalirwa.

Muwada Nkunyingi, the shadow Foreign Affairs minister wondered whether France is more concerned about its economic interests in the country, especially in regard to TotalEnergies interests in the oil pipeline.

“We have seen France coming out strongly in other jurisdictions to condemn attacks on political and human rights activists, why is France silent when it comes to Uganda? Is it because of your economic interests? Is it because of the oil? [You have  to be] mindful that this oil belongs to the people of Uganda, whether you are a French company or a [entity] with economic interests… when you talk about what you saw in other countries like Ukraine, I’m sorry to say that you are late to know what is happening in Uganda,” said Muwada

In his response, the ambassador said that they are fully aware of the situation in Uganda and have programs on human rights funded by the French government.

“Sometimes, what I discuss with the president remains between him as president of Uganda and me, as the representative of my president here. Sometimes we do not share the same view, but our best way to explain our stand about human rights and democracy is under the European Union team,” said Aniambossou.

He noted that they are not shying away from human rights abuses, adding that the issue is not about making statements every day.

"To assure you, we're not hiding. I'm totally aware of some situations in this country, I don't want to go into the details but we have some programs for peace and human rights solely by the French government and when we talk about human rights it is just not to condemn them. Ok, we have to improve the situation. How can we improve the situation? By skilling people, by condemning etc etc. All this we do not see every day unfortunately but we're not hiding at all." he said.

Aniambossou also said that it was wrong for anyone to think that the French embassy is silent about the rights abuses in order to protect its interests in Uganda.

“Democracy, human rights and good governance are all core values of France and France could not be if we ignore these key values,” the ambassador said. He explained that they cannot trade human rights for their businesses in the country.

"Never never in France do we say we don't want to do that because of that. There is no link with the oil, with Total. Total is a private sector [and] we're not selling our soul for business against human rights. Not all our way of doing," he said.

Mpuuga said that they are interested in cultivating a culture of democracy and respect for human rights.

A new report by the US State department titled "2020 Country Reports on Human Rights Practices in Uganda" implicated the UPDF, police and other security agencies of arbitrary arrests, torture, forced disappearances and extrajudicial killings.

The report blames the government for being reluctant to investigate and prosecute officials involved in human rights abuses both in the security services or elsewhere. However, the UPDF has in the recent past noted that the reported cases of indiscipline by its officers are investigated and the perpetrators punished when found guilty.

Turning to the oil and gas sector, the MPs also expressed concern at France’s reluctance to stop French companies from exploiting Uganda’s fossil fuels in accordance with the Paris Agreement on climatic change.

“Coming from your country, even if they are private, to promote the use of fossil oils that are being run away from. Isn’t it a contradiction? It is a very big contradiction. You should be encouraging your companies to help developing countries to begin engaging in alternative sources of energy,” Basalirwa said.

The MPs spoke against a backdrop of a video clip that circulated over the weekend showing French President Emanuel Macron sandwiched by activists at the EU parliament in Brussel, Belgium, demanding that his government stops funding to TotalEnergies because of the company’s involvement in the development of the East African Crude Oil Pipeline (EACOP) over environmental concerns.

Aniambossou said TotalEnergies is a private French company over which the government has no control.

“Our view about this project as per President Macron’s letter to President Museveni is that, it is the right of Ugandans to develop their oil sector but the rights of the people must be respected – their rights on land, there must be compensation of the community,”  Aniambossou said.

He added that the French government is also keen on protecting the environment, an issue it had made clear to the French companies involved in the project.

0 #1 kabayekka 2022-05-18 01:12
How many years has the NRM majority Parliament of Uganda been looking the other way when human rights abuses have been going on in this country?

The Uganda Army is on records that it can only recognize, serve and respect the current government. And if any other government in this country wants to take over, it must first go to the bush and kill and fight to capture power as the NRM political party did 1986.

Many Democratic elections have been formulated, and constitutional amendments enacted to perpetuate NRM republic dynasty by this very parliament. With such parliamentary self determination declared by the NRM, what do this opposition in this African country blaming the country of France for?
Report to administrator