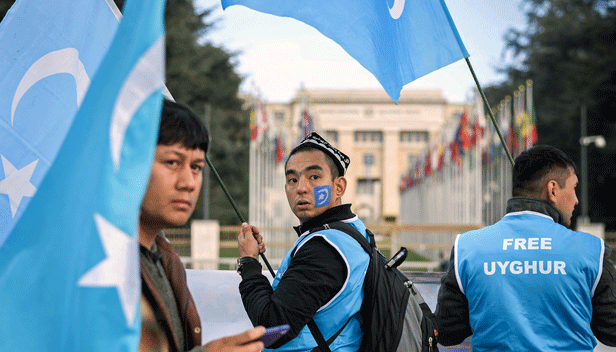 FILE Uyghurs demonstrate against China outside the United Nations compound in Geneva, Switzerland

Chinese officials in Xinjiang are warning Uyghurs not to divulge “state secrets” during a visit by United Nations human rights chief Michelle Bachelet this month, officials in the western region said.

A Chinese government video instructing Uyghurs on 10 things not to do has been shared widely on Douyin, a Chinese version of the TikTok short video app, in Xinjiang, the sources said.

Chinese officials in Xinjiang told RFA that a government notice with the same title had been issued two months ago.

“It’s been around two months since we received it,” said a female police officer from Yarkand township.

When RFA pointed out that the same directive was previously in place, the officer said it was renewed because of the U.N. delegation’s visit.

A five-member advance team from the Office of the UN High Commissioner for Human Rights (OHCHR) arrived in China last week to prepare for a visit by Bachelet expected in May, though the dates have not yet been disclosed.

The UN human rights chief and former Chilean president first announced that her office sought an unfettered access to Xinjiang in September 2018, shortly after she took over her current role. But the trip has been delayed over questions about her freedom of movement through the region.

Uyghur activists and other rights groups are pressing for Bachelet to have independent and unfettered access to Xinjiang to conduct a meaningful investigation of atrocities in the region.

Human rights activists say that by issuing such notices and promotional videos, China is threatening the region’s residents not to disclose any information about the government’s widely documented repression of Uyghurs.

A directive not to take calls

RFA contacted Chinese government offices in several cities in Xinjiang to ask officials about the preparations that were underway before Bachelet’s arrival. Most said that authorities have warned locals not to accept calls from unknown phone numbers and not to answer questions from the UN human rights team without approval from the government.

“We have a directive to not answer phone calls starting with zero,” said a female official from Yarkand county’s Dongbagh village, referring to international calls in China.

A security chief from the No. 2 village of Imamlirim township in Aksu (Akesu) prefecture’s Uchturpan (Wushi) county said people were informed about the directive at a village meeting.

“Don’t talk to any foreigners and don’t answer phone calls starting with zero. This was told to us at the village meeting,” he said.

In the Yarkand county CCP video, authorities warned Uyghurs in sometimes threatening manner not to divulge, question or argue about “state secrets.”

A male police officer from the Dongbagh village police station said he was worried about answering questions from RFA because of the government directive.

“We have a directive on not answering questions from unknown and strange phone calls and people,” the officer said.

Zumret Dawut, a Uyghur who was held in an internment camp and says he was forced to undergo permanent sterilization surgery, said Chinese authorities have always required Uyghurs in Xinjiang to keep quiet whenever U.N. human rights commissioners have visited the region.

“Similar directives existed when I was there,” Dawut said. “They asked us the same things before flag raising ceremonies in the morning. They would ask us not to speak to foreigners and not to talk to them about the [internment] camps, and so on.”

“They would ask us to stay away from foreigners and if asked about China, they would say talk to them about positive things about the country,” Dawut said.

Bachelet will be the first UN human rights commissioner to visit China since 2005. Her office has been under pressure from rights activists to issue an overdue report on rights violations by Chinese authorities targeting Uyghurs and other Turkic communities in the Xinjiang. Uyghur groups have demanded that office issue the report before her visit.

RFA previously reported that since 2009, Uyghurs arrested on charges of “leaking state secrets” have been sentenced to more than seven years in prison.

Uyghurs are sensitive to the consequences of saying too much, Dawut said.

“Despite this, the authorities still felt it was necessary to continue such propaganda,” Dawut told RFA. “The need for this Chinese heightened alert on tightening the information leaks on of state secrets may have been the result of the forthcoming visit by a UN investigation team.”

Ilshat Hassan Kokbore, a Uyghur political observer who lives in the United States, said a country’s state secrets should only be known by high-ranking officials or institutions that govern that country, and not the public.

“If the Chinese government is urging the rural population of the Uyghur region not to divulge so-called state secrets, then what is being hidden here is not a secret, but all the policies and practices of the state — which is the Uyghur genocide,” he told RFA.

“China is afraid that the UN's Bachelet will discover the truth if Uyghurs speak out about the Chinese policy of genocide,” Kokbore said. “That’s why they have initiated this campaign of deception.”

Even when their own leaders took over power by armed insurrection they turned against their own people and killed lots of them.

One wonders why like in Russia people do not want to learn from past mistakes and try to live and work for a peaceful and a better blue planet for all humanity.

One thought that modern countries are busy trying to go to the moon and the planets for a better understanding of what creation is all about.

And communism is all about living and sharing in harmony between humans and other living species.
Report to administrator
+1 #2 Kalibbala 2022-05-16 22:25
There are Three Countries on this Universe where a Muslim is viewed as an Enemy of the State namely: China against the Uyghur, Burma or Myanmar Against the Rhohingya and Uganda! where since 1979 Muslims are targets of State Terrorists Commanded by the Curse to Cause Mayhem in the Community!!

Today they are Openly provoking Muslims in Broad Daylight...Kale Kayihura and Abel Kandiho have a Mission To kill every Muslim in Uganda!! But Even Hitler thought He could Finish Off All the Jews, But he did not Succeed !!
Report to administrator