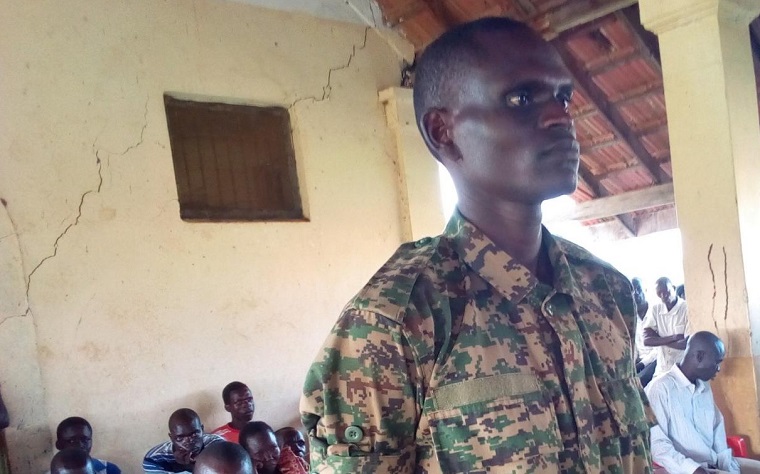 A Uganda People's Defense Forces (UPDF) soldier who was convicted of murder has said he was inadequately trained and did not have the required knowledge and skill to perform his duties at the time of his deployment.

Private Moses Solomon Omuge, a soldier attached to 37th Battalion was convicted of murder during the three-day marathon trial held by the 3rd Division Court Martial at the Ngariam sub county headquarters.

Omuge is accused of shooting to death, a one Estakusi Ikabat alias Naboth Opio on December 18, 2021, in Apuuton village, Katakwi district. The prosecution alleged that Omuge, with other soldiers, laid an ambush at Achanga where they shot three people on suspicion of being cattle thieves. The attack killed Ikabat while the two others, Emmanuel Elungat, 24 and Isaac Operemo, 22, survived with injuries.

The prosecutor Maj Jeff Kennedy Aringakech explained that after the unlawful act, the soldier was heard boasting about his bravery in killing Ikabat. His side also presented five witnesses including survivors of the shooting and soldiers who manned the ambush at Achanga who all pinned Omuge for deliberately ending Ikabat's life.

One of them explained that Omuge met Ikabat and others at the said ambush where he ordered them to sit down. Without asking what they were doing, he ordered them to kneel and went behind to shoot at Ikabat in the back. He paid a deaf ear to their call for mercy and continued shooting until Ikabat breathed his last.

But his defence lawyer Capt Elly Rugyendo told the same court that the soldier had mistakenly shot at Ikabat while acting in self-defence. He added that the soldier mistook the victim for a cattle thief armed with a firearm when he saw the sweater tied around his (Ikabat) neck.

“The accused was trying to defend himself against somebody seen armed with the firearm and in this case, the civilian was armed with a bow and arrow. The deceased found himself in an ambush that was meant to get cattle thieves. Your honour, this was not a case of murder with malice aforethought but the case of mistaken identity,” he argued.

However Col Francis Kateraho, the chairman of the 3rd Division Court Martial said that the shooting, as explained by the prosecution witnesses was not only unlawful but evil and jailed him for 35 years. He added that the soldier erred and needed to serve an exemplary sentence as a deterrent to other UPDF personnel misusing firearms.

Kateraho noted that Omuge had been transferred to Ngariam after attempting to kill another person in Okore sub county in November last year.

But Omuge blamed the action on his poor training. Omuge who was integrated into the UPDF in September 2021 was first recruited into the Local Defense Unit (LDU). During integration, he was given additional training for about four months before deployment. Omuge said that the training was inadequate to have equipped him with field tactics that could have saved the situation.

He also noted that he was taking orders from experienced officers who should have guided him in the field.

“I was on government duty after being deployed by my commander. I manned the ambush with orders. Secondly, I’m not a well-trained soldier, I was trained for only four months. But what surprises me is that an experienced commander is given intelligence by the community members but he decides to keep it from me who was in the bush!," he said.

Omuge added that there was little manpower on the ground and he feared for his life. Ikabat left five children, one of whom was born two weeks after his burial. He was among the victims of murder during the renewed cattle thefts in Katakwi and Kapelebyong districts by the suspected Karimojong warriors.

+1 #1 WADADA rogers 2022-05-16 10:37
Wow, what a confession, they only train them how to short and to shoot to kill even if the other person is not armed. nobody trains them that there is an option of arresting the person.

A poor sense of judgment has landed him in jail but who knows if his commander had advised him to kill
Report to administrator
+2 #2 Concerned Ugandan 2022-05-16 11:06
What this soldier is saying is pertinent and should not be ignored.

If indeed he was deployed during an operation against cattle rustlers then what was the role of his superiors who deployed him.

He did not deploy himself. Was there negligence on the part of senior officers in terms of how the operation was planned?

Did the prosecution take the trouble to actually study the soldier's defence before concluding that he was solely responsible for a killing that occurred during an approved military operation?

This business of parading privates as if the army only has privates smacks of a scapegoat trail! Who was in charge of the operation? Who gave the command to open fire??
Report to administrator
+2 #3 Kabayekka 2022-05-16 11:57
No wonder Africans who suffered the bitter evils of colonialism named such uniformed workers as bassirukale!

Now one wants to ask the well educated defence lawyer, who is going to look after the innocent young family of the dead?
Report to administrator
0 #4 kabayekka 2022-05-16 14:45
Even with such a question of human life knowledge who exactly is going to look after the family of this self confessed badly trained UPDF soldier as the taxpayer of Uganda looks after him for 35 years in the expensive prisons of Uganda? tbv meaning; too bad very!
Report to administrator
+1 #5 Lakwena 2022-05-16 14:56
Except the Big Mouth about the UPDF discipline; "from above" (CIC) the inadequacy in training runs through the UPDF ranks and files (where from was Gen Tibuhaburwa professionally and adequately trained).

In other words, if the CIC is arbitrary, corrupt (promotes without merit) and financially indiscipline, how should one expect the entire UPDF to be discipline?