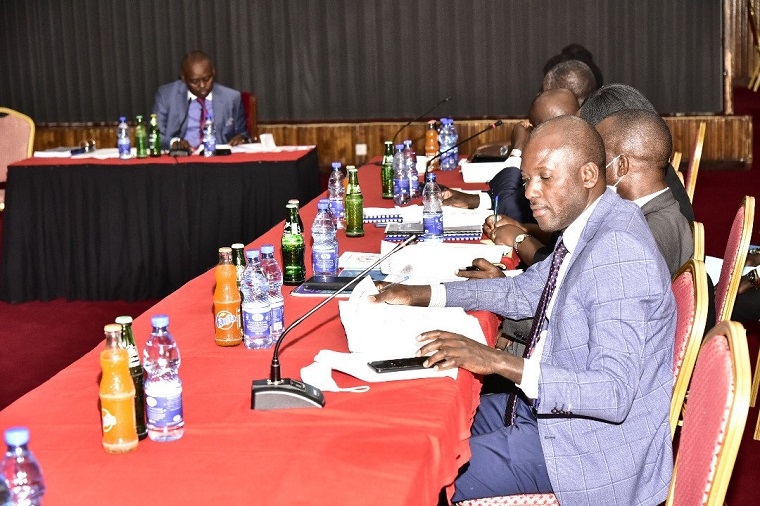 The Uganda Heart Institute (UHI) is under the spotlight for failing to declare a donation of Shs 1.76 billion contrary to the provisions of the Public Finance Management Act, 2015.

According to the Auditor General’s report for the FY 2020/21, the institute received Shs 1.76 billion in off-budget financing that was never declared to the treasury and therefore not appropriated by parliament.

On Wednesday, the officials of the institute led by their executive director, Dr John Omagino appeared before parliament's public accountability committee (PAC) to respond to queries in the report.

Dr Omagino admitted to the committee chaired by Medard Sseggona (Busiro County East) that they received the funds directly from development partners for research and regretted that management failed to declare the money.

He noted that for any subsequent offers, the institute will duly comply with the law, a response that prompted questions from the lawmakers. Kumi municipality MP, Silas Aogon demanded to know why the accountants of the institute flouted the public accounting standards.

“Anything in control of government must be declared to the government. As an institute that employs accountants, how did it happen that these funds from development partners were not declared to the treasury?” Aogon asked.

Agago North County MP, John Amos Okot observed that non-disclosure of such funds breeds suspicious undertakings, a recipe for misappropriation of public funds that must be thoroughly examined.

But Dr Omagino dismissed the suspicions, saying that the money was dispensed to serve its intended purpose as guided by the development partners.

“The money came to the same account, which is monitored by government systems,” Omagino said.

Sseggona reiterated that it is a legal requirement for agencies to declare any form of external or donor funds to the treasury for accountability purposes.

“It is not that the money is lost - it is just a procedural issue that the Auditor General is raising. We are avoiding a scenario where one does not declare funds with the intent to misappropriate it,” Ssegona said.

Omagino claimed that the funds were later declared to the treasury and promised to table the evidence before the committee. The committee issued a two-day ultimatum, until May 13 for the institute to provide evidence that it notified the treasury.

Section 43(1) of the Public Finance Management Act, 2015 states that all expenditure incurred by the government on externally financed projects in a financial year shall be appropriated by Parliament.

The Institute, a component of Mulago National Referral hospital is a specialized, public, tertiary care medical facility owned by the ministry of Health to provide preventive, promotive and clinical cardiovascular services. It also serves as the teaching hospital of Makerere University College of Health Sciences.

Ugandans have perfectioned themselves to ensure Museveni's lifetime rule & those in posts have become thieves, looters like him!

A Ugandan from a tribal land isn't give chance through UNITY, but migrant Museveni has GREEN LIGHT to destroy Uganda, enslave Ugandans, own their tax money, control every institution!

Only tribal leaders, ministers, mps, those in post have chance to be payed/steal & live!

But the majority poor Ugandans have given up & just wait to die in abject poverty as slaves in the fake country formed by their tribal lands!

Ah! Ugandans will legalise Museveni with next fake presidential & parliamentary elections & the peace will continue!
Quote | Report to administrator
+3 #2 kabayekka 2022-05-13 14:11
When one looks at the many video clips of the fake medicines processed underground in South America and sold world wide, one is not surprised about the dodgy work this institution is enacting.

Patients are given expensive drugs that do not work. It only kills them! Was this money given out as a keep quiet about what many Pharmaceutical companies are doing to kill and destroy humanity at a grand scale?
Quote | Report to administrator
+2 #3 Mutwegwenswa Jack 2022-05-13 16:28
Mr Omagino, are you aware that Uganda is dead fed up of thieves who steal under such circumstances?

Are you also aware that the very donors who kindly spent their tax payers money on the heart institute are also dead fed up of Ugandan thieves in high positions who feign ignorance to create an opportunity to steal?
Quote | Report to administrator
+4 #4 Rwatoro 2022-05-14 00:12
That's what you vote for! M7,M7, M7, now you are eating cassava, next is to eat enziige as M7 looks at you and lough how he has made us idiots to support him while he has nothing to offer Ugandans.

Stealing money has not just started. That is M7's game. Put money in the ministries, Rwabwogo at standby to collect it and take it to State House to facilitate M7.
Quote | Report to administrator
0 #5 Jose 2022-05-15 17:01
Dr Omagino is just acting brave
Lwamafa is in the coolers but he n his group just had way out,

We remember mukhula n muhwezi issue, if you were born then
Quote | Report to administrator
0 #6 Lakwena 2022-05-16 10:16
In other words, this was a deliberate Commissioned Omission.

What happened to the Principles of Personal and Professional Ethics of our Public servant?

What happened to concern for others,adherence to the rule of law and preventing personal and public harm?

What happened to due diligence and full disclosure in public service?

No wonder for the lack of these, on 26th Jan 2017, with a sense of disdain; Gen Tibuhaburwa brazenly and without blinking, told us off that he is neither our employee nor servant. Aand since then all the public servants have followed suit.
Quote | Report to administrator
0 #7 Lakwena 2022-05-16 10:28
Although categorized as Civil/Public Servant: while the people whom they are supposed to serve live like slaves and in destitution; Gen Tibuhaburwa and his Thieving and Mighty Civil Servants, live in opulence like Kings, Queens, Princes, Princesses and/or Nobles.

They are chauffeured in perfumed, fully fueled, and 24/7 serviced Sleek, Luxury SUVs paid for in the sweat and blood of impoverished Ugandans.

As if that is not enough, from Sunday to Sunday, and dawn to dusk, escorted by dangerously armed soldiers/police guards; they are always in a hurry: driven at breakneck speed, and they hold their noses and shoo off poor Ugandans from the paved sections of the road, into legs and bolt-joints and shock braking canyon road shoulders.