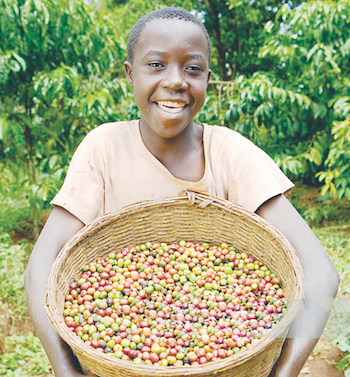 The last couple of months in Uganda have been flustered; and awash with enraged sentiments concerning the country’s position on coffee.

First, by the country [Uganda] revoking its membership of the International Coffee Organization [ICO], and, its subsequent questionable involvement with a fishy Italian investor — Enrica Pinetti - in an effort to industrialize/add-value, and increase earnings from coffee. The affiliation with the alleged investor has sparked widespread concern and distaste among the general public and citizenry who are suspicious of the intentions of the government, and the credibility of the investor in question.

This prompted the secretary to the Treasury Ramathan Ggoobi to address a presser to defend his signing off on the agreement [that was signed with no termination clause] on the government’s behalf; with Ggoobi reiterating that the maneuver was done within the confines of the law, and in the interest of value addition. He [Ggoobi] further told of how the country stood to make nine times more from coffee if value was added to it.

Agreeable as the secretary to the Treasury’s intellection is, there are more pressing conversations in regard to coffee to be had in Uganda; issues that effectuated the concerns raised by Uganda as reasons for its withdrawal from the ICO. Before I address those concerns, one thing stays true: coffee is Uganda’s biggest agricultural export racking up $548.89 million in the financial year 2020/21 as per Bank of Uganda’s composition of Exports, Values and Volumes.

This makes Uganda, Africa’s second biggest coffee exporter behind Ethiopia producing six million 60kg coffee bags, in the last financial year. It is widely acknowledged that coffee exports have been on an upward trajectory, rising from 2.8 million bags [$109.64 million in revenue in 2000/01] — a 114% increase in coffee bean exports in the past two decades.

In a press release by ICO dated February 22, 2022 announcing the withdrawal of Uganda from the International Coffee Agreement 2007, some of the notable dissatisfactions Uganda raised were: ‘...high tariffs on processed coffee by developing/importing countries which disadvantaged coffee-producing countries like Uganda resulting in farmers getting low prices’.

The concern is testimony to the fact that Uganda has failed to protect her coffee farmers from getting low prices from their produce by failing to strengthen coffee cooperatives. They [cooperatives in Uganda] are weak, unprofessional and lacking in leadership, financial training, and cooperative principles. The functional cooperatives are facilitated by international NGOs which have been witch-hunted by the current regime. One such parastatal — Hanns R. Neu- mann Stiftung, a German foundation and partner to International Coffee Partners [ICP], has supported over 550 farmer organizations, and is currently aiding 12 cooperatives that represent over 5,000 farming households in Uganda.

Cooperatives are farmers’ best chance of beating low prices because they organize farmers into groups where they have bargaining power over prices, affording them the flexibility on the best time to sell their coffee and to best manage prices when they are volatile. They, farmers’ cooperatives, also create independent market places [digital platforms] to connect buyers and producers directly where they can sell their coffee at a premium price.

However, the government has intentionally frowned upon cooperatives because of the political risk they pose. They unite people with a common economic cause, giving them bargaining power over their livelihoods. This collective core value threatens government seeing as those who superintend such groups wield so much power; because they speak the language of the common man, which can easily be turned into a political weapon.

A likely incident occurred in Zambia when Fredrick Chiluba, chairman of the Zambia Congress of Trade Unions [ZCTU], defeated Zambia’s first president Kenneth Kaunda by a landslide 75 percent in the 1991 election. Trade unions and cooperatives are akin in model and operation. Clearly the government of Uganda wouldn’t want to take that chance; meaning— coffee farmers have been left to fend for themselves like orphans.

Cooperatives are also monumental in dealing with another concern raised by Uganda Coffee Development Authority [UCDA] to the ICO, price volatility. This they can manage by setting coffee prices through auctions and agreements between coffee producers and buyers. With regard to value-addition, that is, the processing of coffee for export through industrialization, it should have occurred to the policymakers by now that value addition to coffee isn’t necessarily confined to processing/industrialization.

For example, Rwanda has optimized efficiency of her coffee industry while exporting green beans by particularizing in speciality coffee production; garnering admiration from Starbucks Coffee Corporation. Starbucks marketed Rwandan coffee under the ultra-premium ‘Black Apron’, selling a half pound of the brand for $13 in the spring of 2006. A feat it achieved without industrializing the sector.

By purely increasing production through distributing improved inputs, supporting growing coffee associations, increasing quality by educating farmers on quality; strengthening cooperatives as well as promoting the Rwandan brand of coffee; Rwanda has moved from being a ‘below-commodity-grade coffee’ producer; having two coffee washing stations in 2000, to being Africa’s fifth largest coffee producer as of 2020. All attained without industrialization.

Ramathan Ggoobi and other crusaders of industrialization need not be reminded that a mania for industrialization is what led to the economic regression of Ghana under Kwame Nkrumah, and his subsequent downfall; as moving Ghana from agriculture to industrialization backfired — draining government coffers, while setting up many factories for immediate collapse.

Also, industrialization is no end-all be-all because more often than not, these plants are run by foreigners who repatriate the capital to their native countries; on top of underpaying local workers who are governed by bad labour laws.

South Africa, for instance, is the most industrialized country in sub-Saharan Africa, yet, it has the highest income inequality in the world with 10 percent of the population owning 80 percent of the wealth. Not to mention a high unemployment rate at 35 percent. This substantiates the position that industrialization doesn’t necessarily translate into the trickling down of benefits to natives, even with robust factories.

As for UCDA’s withdrawal from the ICO coffee agreement, the country needs the services, research, trading connections, and platform to exchange views on all matters coffee; and other privileges that come with being a signatory to the ICO. The last time the ICO collapsed in July 1989, it ended in loss of revenue for Uganda. It won’t be any different this time round.

Besides, the USA that balked at the agreement in 2018 under the mercurial leadership of President Donald Trump, is making plans to rejoin the ICO under the Joe Biden administration. Ultimately, the ICO is a melting pot of the world’s largest coffee producers and buyers. If they can consent to it, so can we; because, if it is good for the goose [world’s largest coffee producers and buyers], it is good for Uganda.

The author is an independent financial/investment analyst
Twitter: @m_kidamba