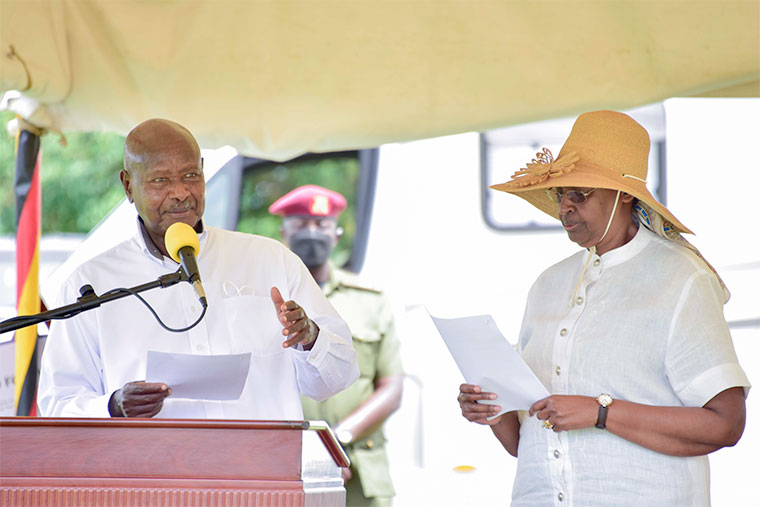 President Yoweri Museveni has apologized to the people of Luwero triangle for the underdevelopment ravaging their area more than 30 years after he ascended to power.

Museveni and his rebel National Resistance Army (NRA), used the jungles of Luwero to launch a five-year guerilla warfare that ended with him capturing power in 1986.

"We started the war from here. The people of Luwero received us and embraced the revolution. They sacrificed their lives, food, security and others to liberate this nation. They gave us the wisdom and grace to work with them through to accomplish this mission. With undeniable support and blessings, we succeeded to win the war and started laying the foundation for the long-term transformation of the country,” he said.

Museveni said this while speaking during the closing ceremony of the ‘Light up Luwero for Jesus Mission’ where he was chief guest. In press release by the presidential press unit, Museveni who was in Luwero at the invitation of his daughter pastor Patience Rwabwogo Museveni of the Covenant Nations Church Luzira said during the struggle many fighters died of HIV/AIDS and other causes and the leaders who took over from them where negligent.

“The leaders who took over stopped the good groundwork and the connectivity we had in this area. Some of our support did not reach you as planned. There was relaxation, negligence and lack of dividends on the part of the team of leaders we trusted with the resources to develop this area. Also, the leaders you elected because you had the power, let us down. As a result, many of our grassroot supporters have become disgruntled, angry and often have a wrong perception that we just use them and drop them which is not true,” he said.

He asked to be pardoned by God and the residents of Luwero and move forward together in developing the region. On the issue of environmental degradation, Museveni warned the residents against occupying wetlands and directed the resident district commissioners (RDCs), chief administrative officers (CAO), and other leaders to follow-up and preserve the environment or else their jobs will be at stake.

On their arrival at New Hope Academy playground at Kasana Kiwoko, Nakaseke district, Museveni, accompanied by First Lady Janet, were welcomed by Rwabogo and her husband Odrek, the minister of state for Luwero-Rwenzori Triangle Alice Kaboyo, the director of New Hope Uganda pastor Jonnes Twebaze Bakimi, general overseer of Born-Again Pentecostal Churches Bishop Joshua Lwere among others. They planted three trees as a sign of peace and later held repentance prayers for Luwero triangle led by Bishop Lwere assisted by pastor Patience Rwabogo and other religious leaders.

Religious leaders from Luweero, Nakasongola, Nakaseke led by Bishop Lwere and on behalf of residents of Luwero triangle accepted the president's plea and also asked for pardon from him, the government of Uganda and God for holding grudges against the government, disobeying God, being negligent, lazy, and deterring their area from developing. On her part, Janet Museveni said she was overjoyed to be in Luwero.

“When my daughter invited us to be present, I knew that it was an appointment I couldn’t miss. This is because Luwero has a special place in the nation and in my heart. We all know that the Luwero triangle was the place that nurtured the revolutionary movement that ushered in freedom and liberty to Uganda,” she said.

Ms Museveni said the bush war that was fought in Luwero brought freedom to Uganda, but it also brought a lot of pain to the people of the land who paid a very high price.

“There was a lot of bloodshed during the years of war and when it finally came to an end, Luwero was like the valley of dry bones spoken of in Ezekiel chapter 37. When I came to Luwero in 1986 after the war, my heart was broken by the many skulls and bones that littered the land. The bones were so many that they were piled up in different areas as memorials to those who had lost their lives as a result of the war. The war also created many orphans as children were left alone without the protection of their parents,” she said.

She added that since the war ended, the journey has not been an easy one for Luwero to come out of the spiritual, emotional and physical trauma of those years.

“Even when development has surged through the rest of the country, it has been a slow and painful journey here. That is why I am very thankful to God because he always has his appointed time. I believe this is his appointed time to visit Luwero in a special way. It is only God who can bring the spiritual healing and restoration to the hearts and minds of people so that they can move on with their lives. We as people can partner with God through repentance, a spirit of brokenness and forgiveness towards others,” she said.

12
0 #11 Eric L 2022-05-10 12:33
The present minister of Luwero affairs is Alice Kaboyo, a reknown global fund thief who was entrenched by crookery into a ministerial position by the same looters seated in the so-called first family.

The best gift you can reward to the people of Luweero is returning the country to wanaichi as you resign from that position,yesterday.
Report to administrator
0 #12 La Bulwich 2022-05-10 12:36
This is the beginning of his nationwide tour of apologies. next stop will be Acholi land.
Report to administrator
+1 #13 Lakwena 2022-05-10 12:45
In other words, the guilt is now sinking in, and it will not go away. Otherwise, why didn't Tibuhaburwa start the subversion and war from Nyabusozi?

It is because he wanted to sacrifice the people of Luweero as a means to his criminal end.

While the husband, Tibuhaburwa was proliferating widows and orphans the wife,Kataha was opportunistically establishing UWESO, to funnel unsuspecting Donors funds into their pocket.

Wachireba?
Report to administrator
+2 #14 PaulM 2022-05-10 14:26
So Museveni remembers to "apologise" to Luweero residents after they completely rejected him in the 2021 election.

What was he waiting for for 35 years? I hope the Luweero people are not so foolish to accept this mockery of an apology.
Report to administrator
0 #15 kabayekka 2022-05-10 15:09
So then who are the most pigs as World leaders? African protagonist leaders like Shiek Nadduli are eager to put into trap the antagonistic African leaders into civil wars.

They declare as they beat their chests; if you want to govern this country, you also must go to the bush and fight!

One understands this guerilla leader did say that if he is removed from the power he captured, he will go back to the bushes of Luweero and fight again!

Unfortunately for Luweero, it is the African Christian priests, who are good at praying for the dead, who are now apologizing to such tyrannical and brutal leadership.
Report to administrator
+1 #16 Olum S. 2022-05-11 11:03
Quoting Zaitun:

Too late beg for forgiveness when everything was strategically planed. It was and is still in your plan to starve not only the people of Luwero Triangle but the nation at large so that you and your kindred remain the owners of Uganda.

You and your people killed, maimed, looted, raped left and right; confiscated people's land and gave it your tribes men and women to the point that even the indigenous owners have become beggers and paupers in their own land.

Now, you guys are parcelling out land to Indians, Chinese, Europeans who have money to give you as compensation! Where have you seen such a thing happening in any of the East African countries?

The underdevelopment of Luwero and Uganda at large was programed to enslave Ugandans. Where is the Independence we could proudly claim to have achieved if we have not been colonised for the second time?

Of the many intriguing anecdotes in this article, there is an alleged apology by Gen. Museveni to a section of Ugandans. However, the attempt is not very clear.

May be it was not an apology after all but an admission. Sometimes an admission may be mistaken for an apology. May be, just may be, Gen. Museveni was admitting (acknowledging) that now that he is older and wiser, the recklessness of his youth had caused much bloodshed, wanton destruction and disruption of an entire region and generation.

In addition, it may be his admission as well that after 36 years, he has done nothing for Luweero. It is possible therefore, that he has not apologized but has admitted (acknowledged) failure.

That’s no genuine apology at all from him. No same person should ever see this as an apology.

He knows he is now persona non grata in Luwero and can only show up there with his odious family, up to their usual con tricks of buying more time.
Report to administrator
0 #18 Lakwena 2022-05-12 15:57
Quoting Olum S.:

In addition, it may be his admission as well that after 36 years, he has done nothing for Luweero. It is possible therefore, that he has not apologized but has admitted (acknowledged) failure.

He knows he is now persona non grata in Luwero and can only show up there with his odious family, up to their usual con tricks of buying more time.

Olum S, in days to come, the more Mr. M7 opens his mouth, the easier it becomes to prosecute, sentence and hang .

In other words, just like on 26th Jan 2017, the man told off Ugandans that he is neither their servant nor employee; Tubuhaburwa's apologies are in themselves plea of guilt.

Else someone should advise the foxy old man and family members to remain silent because, whatever he/they now-a-days say will be used against him/them in the Courts of Law of the Republic of Uganda.