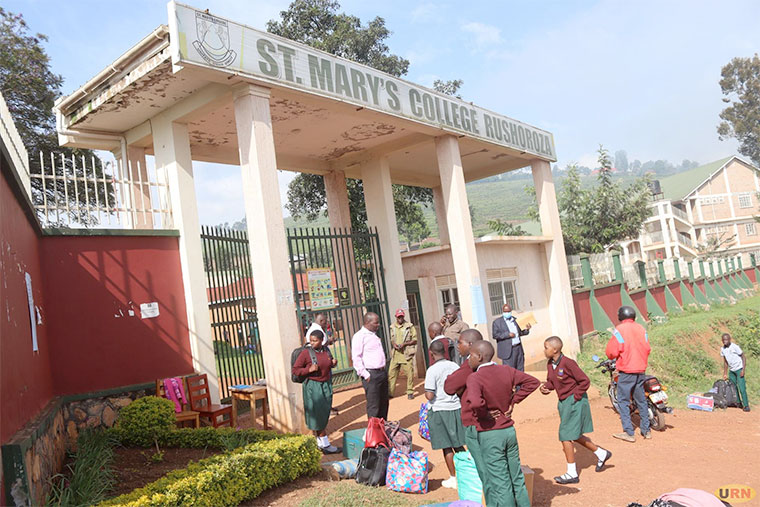 Several schools in Kampala and the countryside have recorded fewer learners as they reopened their gates for the second academic term.

Schools opened for the term today Monday in line with the national education institutions calendar. But school administrators say that majority of the learners have remained home today. It is not yet clear if the no-show is a result of school fees or a heavy downpour witnessed in several parts of the country.

Jane Kyakuwa, the headteacher of Kitante primary school in Kampala says that although normally the numbers are low on the first day, this time around the difference is too visible with just a half or less of the expected number of learners reporting. She is however optimistic that the learners will continue to report in the course of the week.

At Kampala high school, the turn up was equally very low and learners who had turned up barely spent an hour at the school premises.  The school administrators had set up a table where learners would register their requirements before being allowed to proceed to classes.

Those without the required items and their colleagues who had uncleared fees balances from the previous term were sent back home.

Maudhe Salimu, the assistant director of studies, noted that about a third of the school population had returned on the first day, the majority being candidates. He, however, said that this is a common occurrence in schools which might not affect the school calendar or lesson plans.

Salimu added that parents with learners taught under the new lower secondary curriculum should be extra careful given the fact that the longer they take to report, the more they lose since they are assessed depending on what is being taught.

At Changsha Entebbe Model primary school, only 100 out of 600 pupils had reported to the school by 8:30 am. Archilles Lukyamuzi, an upper primary teacher at the school says that 10 of the 100 learners are new entrants who have been admitted to primary one and three.

At Chadwick Namate primary school only 250 out of the 517 learners turned up this morning but the headteacher Robert Muwonge says that they expect more learners to show up during the week.

Mukono district also had a low learner turn-up, and according to school administrators, a number of parents have informed them that they are unable to raise school fees at the moment. In Ngandu Community primary school, 20 out of the expected 200 pupils turned up today.

At Rwimi secondary school in Bunyangabu district, only 130 out of 700 students and seven out of 35 teachers showed up. The headteacher Edward Tuhaise attributes the low turn up to the failure of parents to raise minimum basic school requirements like school fees and books during the three-week holiday.

Paul Bigirwa, the headteacher of Nyakigumba Parents secondary school in Bunyangabu district says the turn-up of learners is lower than what was recorded in term one, the first reopening after a two-year lockdown brought about by the COVID-19 Pandemic.

Kasimeri primary school in Moroto district had only 68 from an enrollment of 900 pupils and only eight out of 29 teachers showed up on day one of the term. The headteacher of the school, George Ewangu said the numbers are low because most teachers and pupils were still travelling from their homes since the majority of students from the schools in Moroto are from neighbouring districts in the regions of Teso, Sebei and Bugisu.

For Moroto Municipal Council primary school, which has an enrollment of 800 pupils, only 100 showed up. The headteacher of the school, Daniel Engwau said the low turn up of children is caused by parental negligence to send the children to school.

Some headteachers in the region however attributed the low numbers to the negative mindset of parents when it comes to education.

Parents attributed the failure to take their children to school to the many requirements schools are demanding for. According to parents, schools are forcing them to pay for secondary school requirements like school uniforms before learners are allowed into school for another term.

Immaculate Twesigye a parent at Rwimi secondary school says even if she managed to buy scholastic materials and pay some school fees, her child stayed away from school because she lacks the Shs 60,000 required to buy school uniforms.

"I have spent all the money on school scholastic materials and that is why I was appealing to the headteacher to allow my children to be using their class uniforms for now," Twesigye said.

Ugandans MUST give chance to a future for the next generation by ensuring Museveni's destructive rule is ended in UNITY & a real government is put in place!

Why wait for Museveni to die in office of old age, then what will Ugandans do as it's only Museveni they look up to?

French made sure they get new president every 5 years for 20 years! Yet this time they were so mad at Macron, but went with 11 opposition leaders against him & non of them won, as the people were so so divided! But they still have chance by ensuring theirparliament is composed of opposition that will block Macron as & when needed!

Ugandans MUST say NO to the tribalistic system & UNITE to end Museveni's rule then put in place the kind of governance they want!