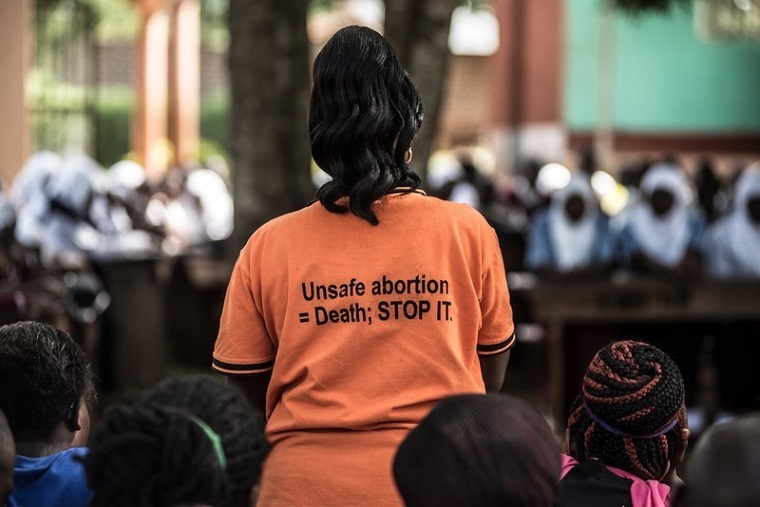 Most of the abortions were unsafe - IPPF photo

Medics in Acholi sub-region are concerned over the growing number of teenage girls and women carrying out unsafe abortions in the region.

This comes at the backdrop of a troubling report indicating a total of 14,530 cases of post-abortion care were registered in various health facilities between 2020 and 2021 alone. Nearly half of those who had to be treated, were so seriously endangered that they had to be admitted. The number of those who aborted successfully and did not require medical care afterwards is not given.

The report captured from health facilities in the districts of Nwoya, Omoro, Pader, Kitgum, Lamwo, Gulu, Amuru, and Agago, indicates 2,922 (38 per cent) of the abortion cases registered in Out Patient Department (OPD) were teenagers. Out of the total cases registered, 7,729 cases were registered in OPD while 6,801 were from the inpatient department.

Meanwhile, in Omoro district, 421 cases were admitted to inpatient and 349 at OPD, and Lamwo district recorded 391 cases in the inpatient and 371 attended to from OPD. Gulu district health officer, Yoweri Idiba says cases of induced and non-induced abortion in the region are on the rise and worrying arguing that there is a need for more sensitization to be conducted.

Idiba says with the recent report, there is an indication that close to 4,000 cases of induced and non-induced abortion are being registered in the region annually. He notes that the Covid-19 pandemic period that saw the government closing down learning institutions contributed greatly to the rise in teenage pregnancies and unsafe abortion mostly in rural areas.

“The trend is increasing, so it’s a challenge, every year over 2,000 children are lost through abortion both induced and non-induced which is a big challenge because its climbing up,” said Idiba.

Patiko clan chief Collins Atiko also reiterates that the two years of Covid-19 lockdown unearth underlying challenges that hadn’t been witnessed in the region among the teenage girls. Atiko says there is a need for various stakeholders to join hands and boost peer education in the community to help reduce cases of teenage pregnancies that continues to be registered in the region.

He suggested the involvement of peer educators who speak the language of the young people to spearhead campaigns against teenage pregnancies.

“if you don't involve the peer groups, we will not be making any progress at all,” says Atiko.

Meanwhile, in Gulu district, a total of 2,186 teenage pregnancy cases have been registered from July 2020 to date. Early this year, medics in Gulu district and Gulu city tasked the local government leaders in the region to regulate the sale of abortion-inducing drugs owing to several complications that resulted from its usage among teenage girls and women.

The medics particularly zeroed on Misoprostol/Cytotec drug as one of the most commonly abused drugs. Abortion is illegal in Uganda. The Penal Code Act (Cap. 120), in sections 141, 142, and 143 criminalizes abortion, attempted abortion, and the sale of drugs intended to aid an abortion.

Why is there no increase in abortion or teenage pregnancy in China where they continue to battle covid 19?

The way people value education in Uganda, with every year of celebrating the best candidates with first grade, you would think Uganda would be ahead in everything including preventing teenage pregancy, but you wonder where these brilliant people end up and Uganda remains one of the worst in every catagories
Report to administrator
+5 #2 Lysol 2022-05-09 02:45
This is one of the hidden agendas of the corrupt killer regime to wipe out those Acholis from the face of the earth, which began from day one of taking over power.

It all started with the bogus war with one Kony, then killing all the prominent sons of Acholi. And now they are killing the kids. One may ask why? Because they want Acholi land and to make sure that an Acholic will never come to power again. It is a passive genocide going on there.
Report to administrator
0 #3 Peter R. 2022-05-09 11:21
Numbers 35:33, Bloodshed pollutes the land, and atonement cannot be made for the land on which blood has been shed, except by the blood of the one who shed it.
Dear Acholi / Lango brothers and sisters, be very very careful; this bloodshed will bring untold bondage and curses on you.
Spiritual leaders have to stand in gap and intercede for the entire region.

Innocent blood shed does not keep quite, it will keep haunting the entire community.

Over to you brothers and sisters with love
Report to administrator
0 #4 Kalibbala 2022-05-09 22:42
#Lysol Spot on! Do not Forget the Systematic Imprisonment of Whole Folks in Concentration Camps plus Poisoning Water Bodies to cause "Nodding Disease" Which mainly targeted Young People!!.

Before Ugandans Stand up to Die Defending their Motherland, You will wake Up being like Red Indians or The Aborigines of Australia!! Your Country is being Mortgaged to Criminals called Investors!

Some are from Europe like The Swiss National Hans Faessler in Kaweri Mubende growing Coffee Plus Indians and Chinese Armed to Shoot and Kill anybody who claims being Ugandan!! WAKE UP PEOPLE!! THE WORLD WILL ASSIST IF YOU REACT..
Report to administrator
0 #5 Mandela 2022-05-10 10:27
We need to normalise condom use.
It should be an sop as long as you are not married.
Is there a condom shortage in Uganda? Can sone one tell us?
Report to administrator