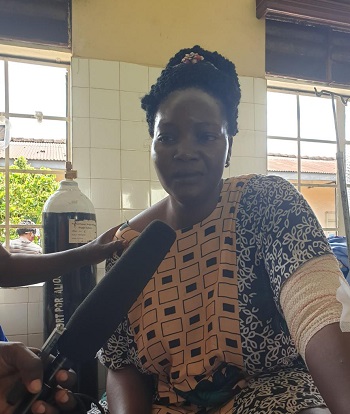 Mariam Nansubuga at the hospital

Miriam Nansubuga may be suffering from broken lower and upper limb injuries sustained during the Link Bus accident, but the pain of losing all her daughters at once on May 4 is something she has failed to come to terms with.

Nansubuga, 30, hails from Iganga district, eastern Uganda and until this week on Wednesday, was a happy mother of three daughters. She has been living with them and her husband Geoffrey Bitamulwe in Bundibugyo district until the reckless driving of a Link Bus snuffed out the young lives of the three girls in a flash.

The family has been living a humble but happy life in Bundibugyo where they established a home while depending on simple agriculture for their livelihood. Nansubuga received a distress call on Tuesday from her family members being notified about the deteriorating health condition of her father in Iganga district.

She promised her family members that she would reach Iganga in two days to nurse her father, since she was to spend a night at her sister’s home in Kampala city on Wednesday. On May 4, Nansubuga boarded a Link coach in the morning at 7 am at Bundibugyo bus terminal, which dropped her at Fort Portal city with her three daughters; Gift Asiimwe, a primary five pupil aged 13, Divine Mubezi, 4, and Destiny Alinda aged 2 months.

In total, she paid Shs 80,000 to cater for their transport fare, hoping for a safe journey. Nansubuga says that the bus left Fort Portal at 9:30 am after picking up other passengers from the Fort Portal bus terminal and headed to Kampala. The journey was smooth and seemed pleasant in the coach until the bus lost control in Kyamara tea estates causing alarm cries and other scary sounds.

“I had a loud noise before the bus rolled several times plunging into the tea estate, during the rumble, I saw a woman with cut breasts crying to me that I help her, but I was in pain as well without any help, I don’t know how I found my way out, where I saw a number of dead bodies,” Nansubuga narrates.

Nansubuga says all her attention was directed to looking for her children whom she claims could not be easily identified after the shocking experience she had gone through.

"Later I saw a cloth I had dressed my 2-month daughter in, I rushed and picked her up but she was dead, and when I ran to check on the other bodies I noticed that all my children were dead in a pool of blood, that was the last thing I remember only to wake up in the hospital,” she added.

Nansubuga says all her money was lost during the tragic accident and currently she has nothing, not even money to buy drugs for treatment.

“There is no serious treatment I’m getting from hospital, I’m supposed to buy everything and I have no money, please help me” Nansubuga pleaded.

One of the nurses in the surgical ward says that the hospital has run short of medicine and they are only cleaning Nansubuga's wounds and giving her injections to reduce her pain. Beatrice Mutamuliza the administrator Fort Portal Regional referral told URN that medical supplies had dwindled yet the facility receives consignments on a quarterly basis.

Mutamuliza says the hospital is struggling to treat serious cases because they lack a CT scan to determine the diagnosis of the patients who need complex treatment.