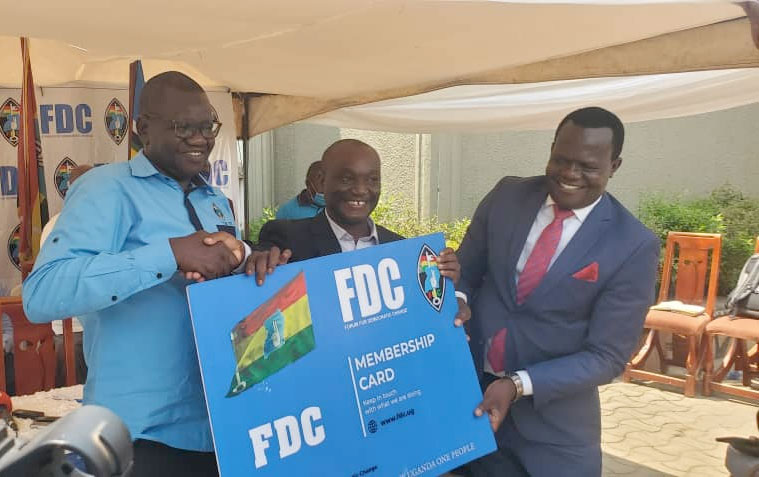 Robert Centenary has returned to FDC

The opposition Forum for Democratic Change (FDC) president Patrick Amuriat Oboi has apologized to former Kasese Municipality MP Robert Centenary for his suspension from the party.
The disagreement between the former MP and the FDC party began in 2019 when FDC district party chairperson Saulo Matte suspended him and three other MPs;  Atkins Katusabe of Bukonzo West, Jackson Mbaju Kathika from Busongora South and Winfred Kiiza, then the Kasese Woman MP. He accused them of shunning party meetings.

Centenary did not participate in the FDC party primaries after this and opted to contest as an independent candidate contrary to the party’s constitution. To many, he had sensed an orchestrated plan by the district party leadership to frustrate his campaign in favour of Sanyu Gedeon Ntabose who contested for the same seat as the FDC candidate. However, the Centenary lost the seat to NRM’s Ferigo Kambale.

During a meeting with Kasese district FDC party members yesterday Thursday evening, Amuriat said the party parted ways with the former legislator on three grounds; unclear statements made against FDC when former party president Gen Mugisha Muntu left the party, his failure to remit monthly contributions, and his decision to contest as an independent candidate.

But Amuriat says the party leadership acknowledged that it erred when it did not give a fair hearing to Centenary at the time, adding that even after the unfair treatment, he has remained a loyal member of the party. The former MP has since been readmitted into the party and asked to join the national secretariat for mobilization.
Amuriat said he was taking responsibility for the party’s error to support Ntabose despite all warnings that he had ties with the ruling NRM party. Ntabose was suspended by FDC for supporting NRM candidates in the 2021 general elections before he officially announced his switch to NRM.

However, Amuriat informed the meeting that Centenary has paid up all the arrears in contributions accrued while he served in parliament and had fully accounted for his decision to contest as an independent candidate.
"I want to announce to you fellow comrades that as far as the payments to the party is concerned, honourable Centenary has paid up all the arrears. At one time I thought that was a very big punishment for him, but then he was okay with it. And you know our chairman is a disciplinarian…he said I’m not going to allow indiscipline in the party in Kasese," said Amuriat.

Fungaroo Kaps Hassan, the former Obongi County MP and a member of the FDC mobilization team said the party is interested in having back all its founding members as part of the ongoing nationwide mobilization drive.

Centenary calls this reunion a rebirth of the FDC and its reclaim to the lost victory in the just concluded general elections. He adds that liberating Kasese and Uganda calls for the involvement of all members and this is one of the reasons he was opted to work with all party members.

+3 #1 WADADA rogers 2022-01-28 18:08
He had no choice but to return
Report to administrator
-7 #2 kabayekka 2022-01-28 18:25
With such political games being played about against the beliefs of all the people of this country, it is high time the Ganda political party of the Kabaka Yekka got a rebirth of itself and started to put on its hand gloves and got ready for any up coming national democratic elections that are free and fair in this country.
Report to administrator
0 #3 kasede 2022-01-29 11:07
Quoting kabayekka:

With such political games being played about against the beliefs of all the people of this country, it is high time the Ganda political party of the Kabaka Yekka got a rebirth of itself and started to put on its hand gloves and got ready for any up coming national democratic elections that are free and fair in this country.

Please ignore them because our domocracy has already died and therefore the opposition parties are widows of that process.
Report to administrator
0 #4 Lakwena 2022-01-31 08:02
Because of the human error of judgment, prudence and/or lifestyle; slaughter the fattest bull to celebrate return of Robert Centenary to FDC; buy a Glamorous Rob, place a Golden Ring on his finger, and see how those who held the fort through thick and thin, begrudge and/or feel about him.

In other words, because of our pettiness, lack of foresightedness and squabbling; it is human to become vane and Prodigal.
Report to administrator