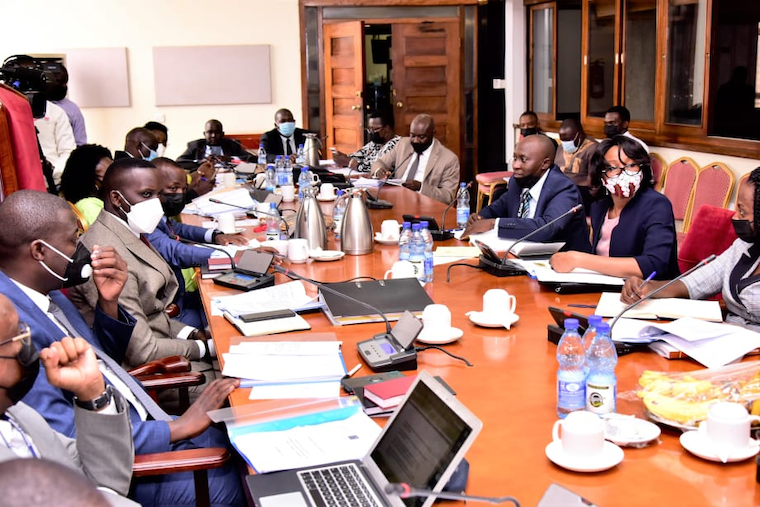 Officials from the Uganda Lands Commission struggled to explain how they allocated more acreage of Uganda Railways Corporation's (URC) land in Nsambya to investors than what was approved by the cabinet. The officials also could not explain how over Shs 69.5 billion accrued from the sale of Railways land was never paid to URC accounts.

Parliament's committee on commissions statutory authority and state enterprise (COSASE) chaired by Joel Ssenyonyi is probing into the sale and giveaway of several estates belonging to URC.

In 2010, as a measure to compensate investors who had missed out on the Nakawa-Naguru land for development, President Museveni directed that URC transfers 57 acres of their Nsambya land to Uganda Land Commission (ULC), which would, in turn, allocate it to the investors. However although the cabinet approved the allocation of 32 acres to the different investors, ULC instead allocated over 62 acres.

The land stretches from Mukwano factory up to Mestil hotel in Nsambya and up north in Kibuli. On Tuesday, MPs discovered discrepancies in the size of land allocated to the investors compared to what was approved by cabinet. Cosase chairperson Joel Ssenyonyi said that the main concern is on why the commission gave out more land than was approved by government.

Richard Ssebamala, the Bukoto Central MP demanded that the ULC bring the mother title of URC land in Nsambya and Kibuli, the new partition, and how the acreage was distributed.

“We need the main title of the land before it was partitioned, we also need to know how you decided on the acreage, and that is what we want," Ssebamala said.

However, ULC secretary Barbara Imaryo said they did not know how this happened and would need to go back and see how it happened.

“I would like to beg your indulgence that this was a decision of the commission, we are requesting for some more time to go back and verify,” Imaryo said.

Ssenyonyi asked the commission to bring documents clarifying discrepancies in the amounts of the land allocated. He also demanded for the original letters and directives of the president be brought to the committee by next week.

Meanwhile, the committee also discovered that businessman Hassan Basajjabalaba's Kampala International University (KIU) and two other firms were allocated part of the land without any clear procedure.

“How Kampala International University of businessman Hassan Bassajjabalaba acquires 14 acres yet it was not part of the private local investors who were listed to be given land is questionable,” Ndyomugyenyi said.

He noted that KIU was not among the firms initially allocated land in the cabinet directive for the 13 investors. However the commission said that they acted on a presidential directive of 29th September 2010 which ordered them to allocate Basajjabalaba with 20 acres to cater for university's expansion, but they only had 14 acres left.

The committee also questioned why although KIU paid a premium of Shs 675 million and annual ground rent of Shs 34 million, the development in the area is a shopping mall and not an extension of the university.

+6 #1 Lakwena 2021-11-25 09:59
In my bone marrow opinion, right from coveting the Luweero Triangle Land; who can still deny that Gen Tibuhaburwa is the Genesis and Director of all the current land-conflict and grabbing in this country?

E.g., after being given Air promise (a false hope/promises) of constructing a satellite City in Naguru and Nakawa; but to date and after the ruthless eviction of hundreds of families and/or thousands of tenants, and demolition of the Housing Estate; look at the Naguru and Nakawa lands!

It is now idle and ready for grabbing and/or allocation to regime's mafias and foreign plunderers.

In other words, if there is human concern and compassion for others; one can only imagine the trauma and homelessness of the people who were born and lived in he UR Nsambya Naguru and Nakawa Estates, but suddenly rendered destitutes.

Many of them are now living like frogs in the Namwongo swamp/wetland, where they scavenge a living.

Wachireba?
Quote | Report to administrator
+3 #2 Lakwena 2021-11-25 11:14
It high time Ugandans with conscience and concern for victims of injustices like land-grabbing, boycotted businesses whose land and/or premises were dubiously/fraudulently acquired and/or grabbed, or bought from proceeds out of corruption.

Otherwise, history will accuse us of being accomplices to plunder, injustice, and complacency to crime against humanity.
Quote | Report to administrator
0 #3 kabayekka 2021-11-25 14:00
Indeed these government officials need more time to scrutinize what is happening.

No wonder the whole government demanded from the national mandate more terms of governance so that better commercial business can be consolidated!

This railway business seems to need more than 30 years to come before Uganda has a network of railway transport.
Quote | Report to administrator
0 #4 Rujegere Peter 2021-11-25 16:38
what a nice pipe dream to "take Uganda to a middle income status by the year 2020" when such a high level of incompetence is in place!!!
Quote | Report to administrator
+1 #5 Joseph 2021-11-25 23:09
Uganda, NRM, NEC, Mr.President where are we heading too. What should we tell our children. Is there anything left to tell our children that this is good.

Where are the true gentlemen and ladies of the country, stand up and be counted.
Attorney general say something, ofono opondo why don't you release a statement.
Quote | Report to administrator
+1 #6 Lakwena 2021-11-26 10:35
Quoting Joseph:

Where are the true gentlemen and ladies of the country, stand up and be counted.
Attorney general say something, ofono opondo why don't you release a statement.

OO aka Ofwono Opondo, is another ''Afande Piano'' and so , we have been relieved for this time from his lies while he is away in china...!

We are sick of lies being told to Ugandans who have now been reduced to the level of fools by their leaders !!!
Quote | Report to administrator
0 #8 Byabasheija Cantigen 2021-11-27 11:16
Quoting Lakwena:

It high time Ugandans with conscience and concern for victims of injustices like land-grabbing, boycotted businesses whose land and/or premises were dubiously/fraudulently acquired and/or grabbed, or bought from proceeds out of corruption.
.

Very true indeed !! That is what it means to love your country , contrary to what the thieves holding political offices and technocrats are doing ie stealing billions of public money and telling stinking lies to impoverished Ugandans that the country is on a growth trajectory....!

Idi Amin Dada (Now RIP) must be turning in his grave when he hears about these Ugandan public money thieves!!!!

He would have put them on firing squad than beg them to keep him in power as president in a symbiotic relationship of love!!!
Quote | Report to administrator
Refresh comments list
RSS feed for comments to this post
Add comment