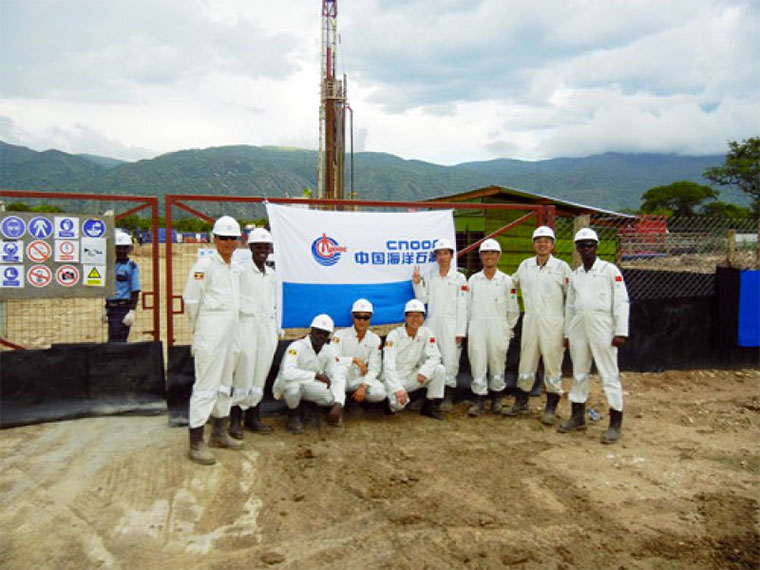 CNOOC staff in the field

Energy and Mineral Development minister Ruth Nankabirwa says that the CNOOC confirmed that they have authorized an FID in Uganda.

The decision by CNOOC to unlock billions of dollars of investment in Uganda’s oil and gas sector now gives a green light to the proposed construction of a $3.5 billion East African Crude Oil Pipeline (EACOP) and other infrastructure in the Albertine region. CNOOC operates the Kingfisher project which expects to produce the country's first oil.

Ali Ssekatawa, director legal and corporate affairs at Petroleum Authority of Uganda (PAU) described CNOOC’s decision as a significant milestone for the people of Uganda and China.

“This project has two anchor companies which are taking it forward, one is TotalEnergies from France, and the other one is CNOOC from China," he explained.

"Total in France made its FID early this year when their president came and met our president. CNOOC indicated that they needed approval from the highest bodies in China. Today [Wednesday], our minister has confirmed that she received confirmation that they have sanctioned this project,” he said.

The sanctioning of the project, according to Ssekatawa, means that they have allowed the Kingfisher project to go ahead. With the FID, CNOOC can proceed with drilling to develop Kingfisher’s Mputa, Nzizi and Waraga fields. CNOOC hopes to produce about 40,000 barrels of oil per day during peak production.

The FID also paves way for the construction of production facilities including the central processing facility, infield and feeder pipelines. According to Ssekatawa, CNOOC’s FID is also expected to increase the momentum for the East African Crude Oil pipeline. There are four shareholders in the EACOP with TotalEnergies Ltd as a major shareholder with 62 per cent.

"From a Ugandan perspective, the project has taken another corner, if it is a marathon, we have now turned the last corner and we're chasing the last mile because now we can see Tanga in sight. Tanga is where we're going to be having the first oil. So it means that these companies have confirmed funding and the project is going to move even faster. Lastly, the last mile that remains is we have all agreed that the project requires some amendment in our law in Uganda and Tanzania for it to be enabled," said Ssekatawa.

Uganda’s crude oil from the Kingfisher and Tilenga projects will be transported through a 1,443-kilometer 897-mile heated pipeline for export through the port of Tanga in Tanzania.

Efforts to interview CNOOC Uganda’s vice president, Cui Yujun were futile because he could not be reached on phone. Yujun has in the past indicated that CNOOC will deliver the Kingfisher project at the same time with Total's Tilenga project. Total, in April announced a 43-month journey aimed at having Uganda's first oil out of the ground by 2025.

Meanwhile, Nankabirwa says the government is determined to ensure that parliament considers and passes all the laws needed to steer the oil and gas sector forward. Among the pending laws are the East African Crude Oil Bill 2021 Bill, the Income Tax Amendment Bill 2021 and amendments to the Public Finance Amendment Bill 2021.