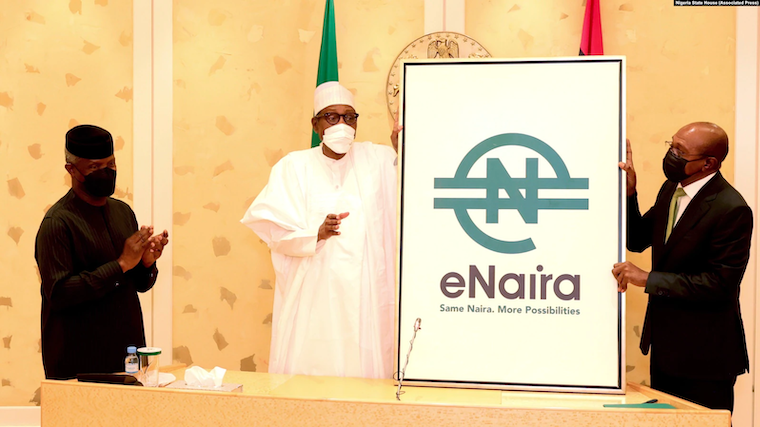 The launch also ranks Nigeria among very few nations in the world to adopt the electronic money system which leaders hope will help boost the country's GDP and fight inflation.

The official launch of the Central Bank of Nigeria Digital Currency, CBDC, took place at State House in Abuja on Monday, with top government officials attending.

Nigerian President, Muhammadu Buhari unveiled the e-Naira and said it could potentially boost Nigeria's Gross Domestic Product by up to $29 billion over the next decade. Blockchain technology expert, Jadel Chidi welcomes the launch.

"Digital currency helps to foster faster payments, it also [is] supposedly less expensive than the regular payment systems you have already. You make your transactions person to person; you don't need an intermediary," said Chidi.

The e-Naira app went live and became available for citizens to download, immediately after the launch. A digital currency is a means of payment that exists purely in electronic form. Other types include the cryptocurrency which authorities banned in February saying its instability exposed citizens to huge financial risks.

The government expects the e-Naira to improve store of value for Nigeria weakening currently as well as drive financial inclusion for millions of citizens. But digital money experts like Janet Kaatyo say Internet penetration and tech savviness could present initial problems.

Jadel Chidi said there are also concerns about the e-Naira's regulation by Nigeria’s government.

The use of digital currencies has grown in recent years in Nigeria, especially among the younger population. Authorities say with the e-Naira, they can better monitor transactions, curb black market trading for the paper currency, protect against devaluation, and lower inflation.