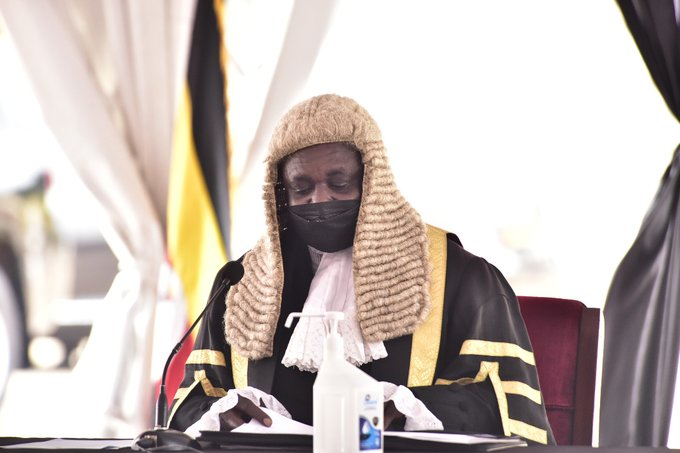 The speaker of parliament, Jacob Oulanyah rejected requests by the opposition to have the House intervene in the continued denial of bail to MPs Muhammad Ssegirinya and Allan Ssewanyana.

The two are facing several charges, including murder, attempted murder, aiding, and abetting terrorism. They were on Monday this week denied bail by Masaka High court judge, Lawrence Tweyanze, saying that their release would jeopardize investigations since they are currently under trial.

Tweyanze said that the MPs are public figures and have the capacity to influence and interfere with investigations including absconding from bail. He also said that their lawyers led by Kampala Lord Mayor, Erias Lukwago failed to prove that the MPs were ill and that the first charges where the two legislators had been granted bail were different from the case before him.

Ssegirinya and Ssewanyana are accused of masterminding the recent machete killings in Masaka sub-region. Masaka High court recently granted them bail but they were later re-arrested, charged afresh and further remanded.

During the Tuesday afternoon plenary sitting, Kira Municipality MP Ibrahim Ssemujju Nganda raised a procedural issue in regard to the denial of bail to their two colleagues.

“When I came here, I was given the Constitution and I took an oath to defend the Constitution, these two colleagues have been denied bail because the head of state has been threatening everybody that he wants them to be in prison, yet they were granted bail under the Constitution because they are presumed to be innocent,” said Ssemujju.

He asked the speaker for guidance given the ongoing circumstances. In response, Oulanyah said that he used to practice law and he applied for bail several times and it was denied.

"It's constitutional to grant bail, it's also constitutional to deny bail. Let us not politicize this matter. Let us accord respect to the institutions that operate within the Constitution...without imposing undue pressure on other agencies of government. We try our level best behind the scenes to see that things are happening but when we make it public like this, what message do we send to the rest of the country about respect of the independence of institutions," said Oulanyah.

Francis Zaake, the Mityana Municipality MP also raised another procedural point saying that Ssegirinya had been removed from prison on Tuesday and taken to Mulago hospital to receive treatment. He said that it was unfair not to provide specialized treatment to a legislator yet parliament caters for it.

However, Oulanyah ruled that procedural matters are about procedures in the House.

Ssegirinya and Ssewanyana with 10 others were initially remanded to Masaka Ssaza Prison on murder charges. Murder is a capital offense and it attracts a maximum punishment of death by hanging when convicted, according to the Penal Code Act.

And that is what Mr. Museveni seem to advocate - that the punishment for any one accused (even falsely) of a capital offense must be incarcerated for no less than six months.

This is a slippery slope on which Mr. Olunyah or even those other people pushing this should hopefully never find themselves one day.

The solution lies if judicial and police reforms that build the competence of the investigative authorities and the judicial officials to expedite the conclusion of all cases.

Mr. Museveni apparently thinks that spending 6months in jail and later found to be innocent is no big deal. It is not a big deal if you are not the victim of such a travesty of justice.4x
Report to administrator
0 #2 Lakwena 2021-10-27 10:43
In other words, even if the heavy handed neighbor is terrorizing, starving his children and murdering his wife; the Alpha Opportunist that he has become and can get, Yakobo Oulanya Lanywen (Confusing Agent), is a graduate of the Sadistic Doctrine of "Non Interference into other's Internal Affairs.

Denying bail cannot be constitutional if it becomes punishment for a suspected crime that one may or may not have committed, Mr. Olunyah.

And that is what Mr. Museveni seem to advocate - that the punishment for any one accused (even falsely) of a capital offense must be incarcerated for no less than six months. ...

In other words, under Bloody Gen Tibuhaburwa, Ugandans have non of their human rights.

Wachireba?
Report to administrator
+1 #4 Zaitun 2021-10-27 16:34
The day will come when Jacob Oulanyah will swallow his pride as he will be left on the streets of Kampala.

These Ugandans who act as if they never studied law while in the University, but follow the aging man blindly should be careful as they take pride in inflicting sufferings on Ugandans.
Report to administrator