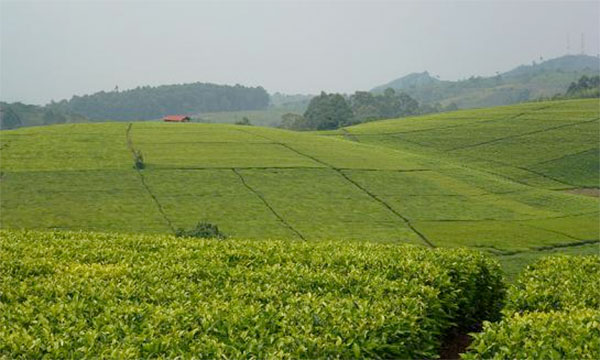 Tea farmers in the Buhweju district, western Uganda are stuck with their bumper harvest due to a shortage of processing factories.

The farmers supply their produce to Igara-Buhweju tea factory, the only factory in the district. It was constructed in 2010 with the capacity to produce 100,000 kilograms every day however, the farmers are supplying much more than what the factory can process.

According to Atamba, the district needs at least four factories that will process the green tea supplied by local farmers. Sebastian Byabashaija, the agricultural officer of Nyakashaka town council, says that the farmers' produce has been left to waste at the collection centres.

Moses Tumusiime, chairperson of Nyakarambi collecting centre and a tea farmer says that they have lost a lot of money because their tea is left to dry at the centres.

Arthur Babu, a tea farmer attributed the bumper tea harvests to the current rains and the fertilizers that the farmers applied during the dry season. Deo Atuhaire, the Buhweju LC V chairperson says that they have written to the ministry of Agriculture about the shortage of tea factories in the district.

Atuhaire says that they supplied over 35 million tea seedlings last season and there are plans to supply an additional 47 million seeds. Julius Amutuhaire, the chairperson of the factory, says that they limited the quantity of green leaf because the farmers were supplying much more than the factory could process. He attributed the low production to the unstable electricity supply.

Then pineapple farmers in Luwero suffered a similar fate. Then orange growers in Eastern Uganda. Now the tea growers! We need a clear strategy to support our farmers.
Report to administrator