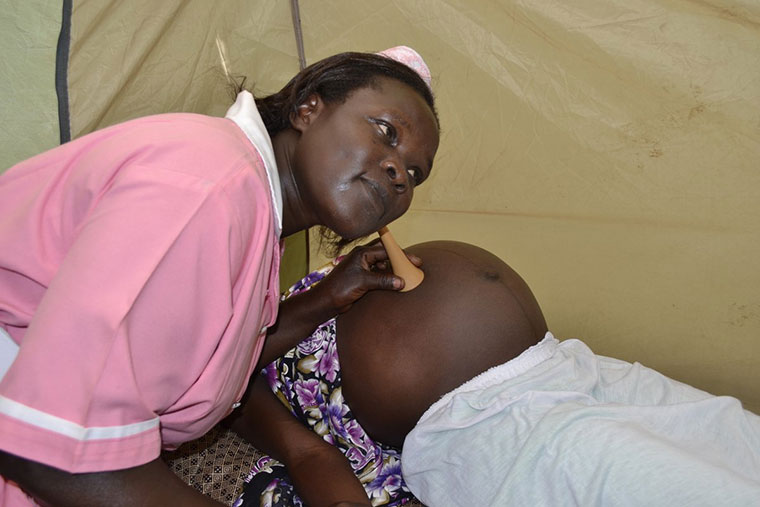 A midwife checking for pulse in a pregnant woman

Pregnant women are increasingly reporting a rare form of heart disease during the last months of pregnancy and up to five months after delivery.

Scientifically named Peripartum cardiomyopathy (PPCM), doctors at Mulago National Referral hospital and the Uganda Heart Institute (UHI) have said the condition is now affecting 17 in every 100 women reporting for care.

In their year-long study conducted together with researchers from the Makerere University College of Health Sciences, the medics followed up 236 women aged 27-39 with features of acute heart failure that developed in the last month of pregnancy or during the first five months after birth, scientifically known as the peripartum period.

Participants in the study were confirmed once the prior history of heart disease was excluded and not having other determinable causes for heart disease and failures such as hypertension, birth defects of the heart and HIV/Aids.

Dr Juliet Nabbaale a cardiologist at UHI says that they performed an ultrasound scan of the heart (echocardiogram) among all participants to determine the function of the heart also called ejection fraction. While a normal heart will pump at approximately 50 per cent to 75 per cent power of the left chamber of the heart, they found those with the disease to be pumping at low rates.

“The women we diagnosed with PPCM were found to have an ejection fraction of less than 45 per cent. This means their heart function had dropped,” she explains.

41 of the 236 women were diagnosed with PPCM, putting the prevalence of the condition at 17 per cent. When this figure was compared with literature from elsewhere, they found the condition affects one in 1,000 pregnant women in South Africa and one in 100 in DRC and Nigeria.

“The high burden of the condition warrants commitment of resources by government to establish maternal cardiac clinics at each of Uganda’s regional referral hospitals to promote early detection and prevent illness and death from PPCM,” Nabbaale advises.

Furthermore, the mothers were followed up for six months to identify whether there was any maternal or fetal death but none was registered. 60 per cent of the study participants had had full recovery of their heart function in six months while on proper full dosed heart failure medication.

Doctors however say HIV-positive women risk suffering from the condition again in pregnancies that they might get in future and are warned to enroll early on for antenatal care to be monitored for any red flags and be enrolled on treatment.

One of the red flags could be swollen feet, ankles, and legs.  This doctor says the condition may also be accompanied by a fast heartbeat, shortness of breath and cough as a result of fluid build-up in the lungs. Other signs include increased night-time urination and fatigue.

These signs Nabbaale says may mimic those of normal pregnancy, a reason why one needs to do a test to rule out any complications since the condition can quickly lead to heart failure.

This study which was funded by NURTURE Research Training and Mentoring Program for Career Development found women with multiple pregnancies to be at a higher risk of developing heart complications.

The biggest health risk in this country is boda bodas having different curfew time to the rest of the population.
Report to administrator
0 #2 kabayekka 2021-10-23 01:49
Unfortunately for such a very important health care and research needs better funding.

And those who are most responsible for such medical programs get their treatments abroad for such related ailments.

And if it was not for COVID19, such information and professional treatment would not be available in any of the country's hospitals. One is doubtful if after the end of this brutal pandemic the local hospitals will keep up some sort of basic standards.
Report to administrator