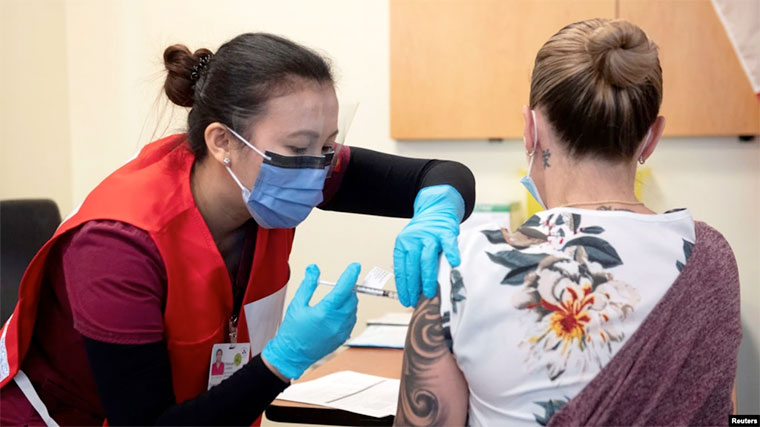 Recent studies indicate Canada’s decision to extend the interval between the first and second dose of COVID-19 vaccines can actually lead to increased resistance to the virus.

It also finds mixing the brand and type of doses gives better protection. The decision by Canadian authorities to immunize as many people as possible with any available dose of COVID-19 vaccine, then extending the time until administering the second dose, appears to be paying off.

Recent data compiled by the British Columbia Centre for Disease Control and the Quebec National Institute of Public Health also show the strategy of using the first available vaccine for a second dose, even if not the same brand as the first, actually increased effectiveness and saved lives.

Pfizer, Moderna and AstraZeneca all recommend 21 to 28 days between the two shots. Canada’s experience suggests protection is even stronger after a six-week interval. For the Pfizer vaccine, this effectiveness went from 82 per cent after a three-to-four-week interval, to 93% when the booster, or secondary dose, was given after four months.

The study also finds two doses of the AstraZeneca vaccine gave less protection than the mRNA vaccines of Pfizer and Moderna. However, those who received an mRNA as a booster dose have the same protection as if they had two of the same, even if their first dose was AstraZeneca.

All three vaccines were found to be more than 90 per cent effective in keeping recipients out of the hospital for COVID-19. Throughout the pandemic, Dr Bonnie Henry, the provincial health officer for the Canadian province of British Columbia, has encouraged first doses to be administered as quickly as possible — and not to worry about whether the second dose is from a different vaccine.

Overall, she said Canada's experience could provide insights for the rest of the world.

“We don't want countries to have to hold doses back or wait for manufacturers to be able to give people the full protection they need when they're seeing outbreaks in other countries —and we saw this in India, for example," Henry said. "So it is really important globally that we're able to use whatever vaccines are available to support people to have good protection.”

Joan Robinson, a pediatric infectious-disease doctor and professor at the University of Alberta and Stollery Children’s Hospital in Edmonton, said increasing the time between the doses can be good for the long term in areas with stable or low coronavirus levels.

However, Robinson said there is one downside for the short term, especially in areas where there are high concentrations of COVID-19 cases.

“So the delay between the doses during the time between your first and second dose, you're much more likely to get COVID than if you had got this second dose earlier, Robinson said. "Certainly with the delta variant, one gets the impression that one dose may be less effective.”

Dr Brian Conway, medical director of the Vancouver Infectious Diseases Centre, said for countries around the world where there is an issue with vaccine supply, the data show at least there will be no decrease in efficacy by delaying the second dose. However, he is cautious about creating too much of a delay.

“I think these data from Quebec and British Columbia suggest that if that second dose is delayed, that at the very least the efficacy is preserved. You need to be careful about not delaying the second dose too much because vaccine efficacy, especially after only one dose, will decrease significantly over time," Conway said. "But it does allow you to strategically deploy vaccine to protect as many people as you can as quickly as possible.”

The findings of researchers in British Columbia and Quebec, which are thousands of kilometers apart, are almost identical. This most recent Canadian data have not been widely published or peer-reviewed, but researchers released the information early to make it available globally as soon as possible.