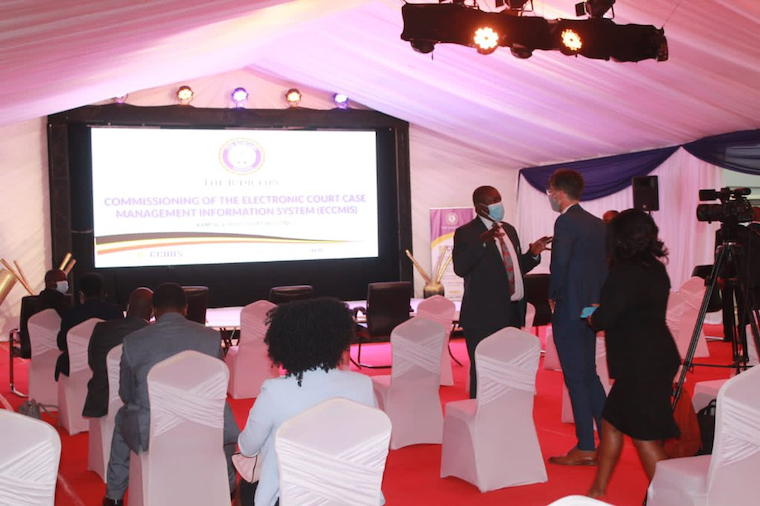 The Judiciary has launched the Electronic Case Management Information System (ECCMIS) that will reduce contact between the litigating public and court staff in a bid to curb corruption in the sector.

The system is set to begin operations during the 2022 law year. Currently, the judiciary is using the Court Case Administration System which has been criticized for being prone to corruption and delaying justice.

The new system will provide a portal where one logs in and registers his or her case file. It will also have security safeguards that allow someone access to only information that they are entitled to and also deter anyone from corrupting the data.

Speaking at the launch of the system at the judiciary headquarters, chief justice Alfonse Owinyi-Dollo explained that the ECCMIS portal will provide the ability for parties to receive notifications about any process or action on any case in court through messages on mobile phones and email.

"The abilities point to a mobile court now in your hands accessible via your mobile device. One can e-file from anywhere and at any time of the day unlike the current system that is limited to 8 am to 5 pm working hours," said Owiny-Dollo.

The chief justice adds that to enable access to justice and bring it closer to the people, the judiciary will set up ECCMIS digital kiosks to assist the litigants who are unable to electronically file cases. According to Owiny-Dollo, they will also train lawyers next month and some of the judiciary staff to get accustomed to the system.

The chairperson of the ECCMIS steering committee justice Fredrick Egonda-Ntende noted that the implementation will be done in a phased approach to avoid a stampede that may result in the inefficient use of the system.

According to Egonda-Ntende, the system will be piloted in some courts across Kampala such as Law Development Centre Magistrate's court, Mengo, Nakawa, Makindye and Buganda Road courts, Court of Appeal and Supreme Court.

The minister of Finance Maria Kasaija said that the new system will not only improve the delivery of services in the Judiciary but also increase the country’s revenue.

"I’m a victim myself as you know, I had a case,  somebody took me to court 1995, the court, my lord justice, was only resolved only about a year ago. It was a land case matter [but] I couldn’t access the bank to lend me money. Those of you who do not know me, I'm a farmer, I couldn’t access loans. When I go, the title has a problem because the other guy had put a kind of court injunction on the title and it took all that time. So you can imagine the time I took, I could by now maybe a multimillionaire but you could see poverty on me now because of the system." said Kasaija.

In 2019, the Judiciary signed a five-year contract worth Shs 9.2 billion with Synergy International Systems to set up ECCMIS and the digitalization of court proceedings.

Technology has the potential to unburden the Judiciary of its colonial clog and its overt self-importance. The Shylocks, merchants of lies, wheeler dealers, blackmailers and ransom peddlers in the noble business of law will soon fall on hard times. There is hope, my friends.
Report to administrator